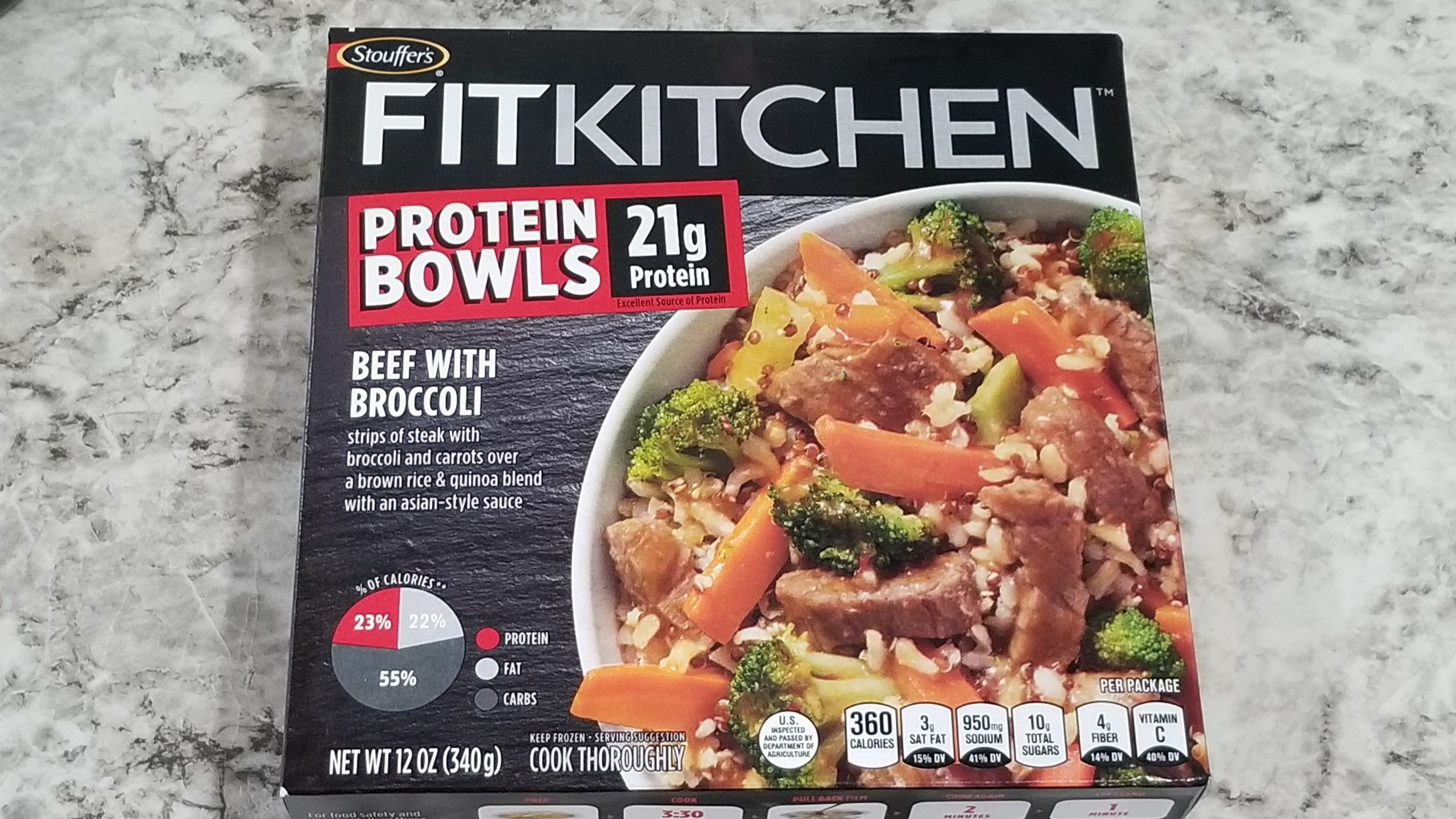 Fit Kitchen Beef With Broccoli wasn’t the first thing that I had in mind when I went to Walgreens the other day.

However, I ended up with a $10 gift card for the drug store in exchange for signing up to get the St. Paul Pioneer Press. Their sales rep also definitely claimed the Washington Post was bankrupt and the PP was next if I didn’t become a subscriber.

Regardless of any potentially bald-faced lies this guy was spinning to get my $7/month for once-a-week newspapers, I do like picking up the paper with a cup of coffee once in a while. Because of that, I ended up with 10 dollars to burn at Walgreens.

To the freezer section I went.

I always think of lasagna when I think of Stouffers, but they have this line of meals for health-conscious folks called Fit Kitchen. They also happen to be sold at Walgreens, or at least some of them are. It ran about $5.00, but the second was half off so that was nice. Fit Kitchen Beef With Broccoli looked like a good edition to my freezer, so it went in my stack of other meals I bought with the gift card.

Stouffers has been around for a while now. Awhile meaning since the ‘20s. It’s probably the oldest company we’ve reviewed food from! It started with the family selling buttermilk biscuits at an old shopping center, which then lead to a restaurant being opened, then another and somehow their history (from the website) jumps to the frozen ‘50s.

Since 1954, they have been putting out frozen entrées.

The Front of Fit Kitchen Beef with Broccoli

The front of the package gets pretty intense telling you that they’re PROTEIN BOWLS!! They have 21 grams of protein, but that’s for the nutrition facts later. One thing I really like is their picture of a dinner plate and the pie chart measurement of the percentage of calories this meal has. They also provide a nice picture of the finished meal, complete with its carrots, broccoli, beef, quinoa, and brown rice blended in there.

Given the amount of different ingredients and the fact that this is 12 ounces, I’d peg it for being more calories if I had to guess. It only clocks in at 360, though, so you’ll need that apple or other side if it’s your lunch. Having it as a midnight snack’s a different story, it’d be perfect with some Netflix.

This Fit Kitchen beef with broccoli is loaded with good stuff. You’ll get 40% of your daily amount of Vitamin C, 35% of your daily Vitamin A, and some other fan-favorites like 880 mg’s of Potassium. That’s 20% of your daily value if you’re wondering.

The ingredient side of this box touts that it has no artificial flavors or preservatives. The actual list does show that caramel color is added, although that seems like it’s in there as a natural color. You’ll find mostly good and easy to pronounce things in this list.

The brown rice is in there, as is the cooked red quinoa and even some sodium phosphates. I’d never heard of Tamari soy sauce or sweet potato powder, but I suppose that exists and it is in fact a thing.

You get to leave the film on and not vent it at the beginning, which saves you a second or two. The packaging warns that a popping sound may occur while the bowl is in your microwave for the 3:30 on high. I didn’t really hear that at all, though.

The film was really easy to peel off in order to stir the bowl at the end of the first round of cooking. The Fit Kitchen Beef with Broccoli was also pretty steaky smelling at this point, but, there was still a bit of an ice block of food in the middle.

I broke up the ice chunk as best as possible my fork. After stirring the bowl and putting it back in the microwave for 2 more minutes, it came out very hot and ready.

It was definitely hot enough after the two minutes of cooking and one minute of rest. While it did look watery, it didn’t taste that way.

The Asian-style sauce just had that look about it, but otherwise this thing was fantastic. The beef and broccoli were awesome, so were the carrots. The brown rice and quinoa mix were also nice for the carbs.

All the Vitamin A, C, Protein and Potassium were a big plus. I was also pretty focused in the afternoon after eating this one.