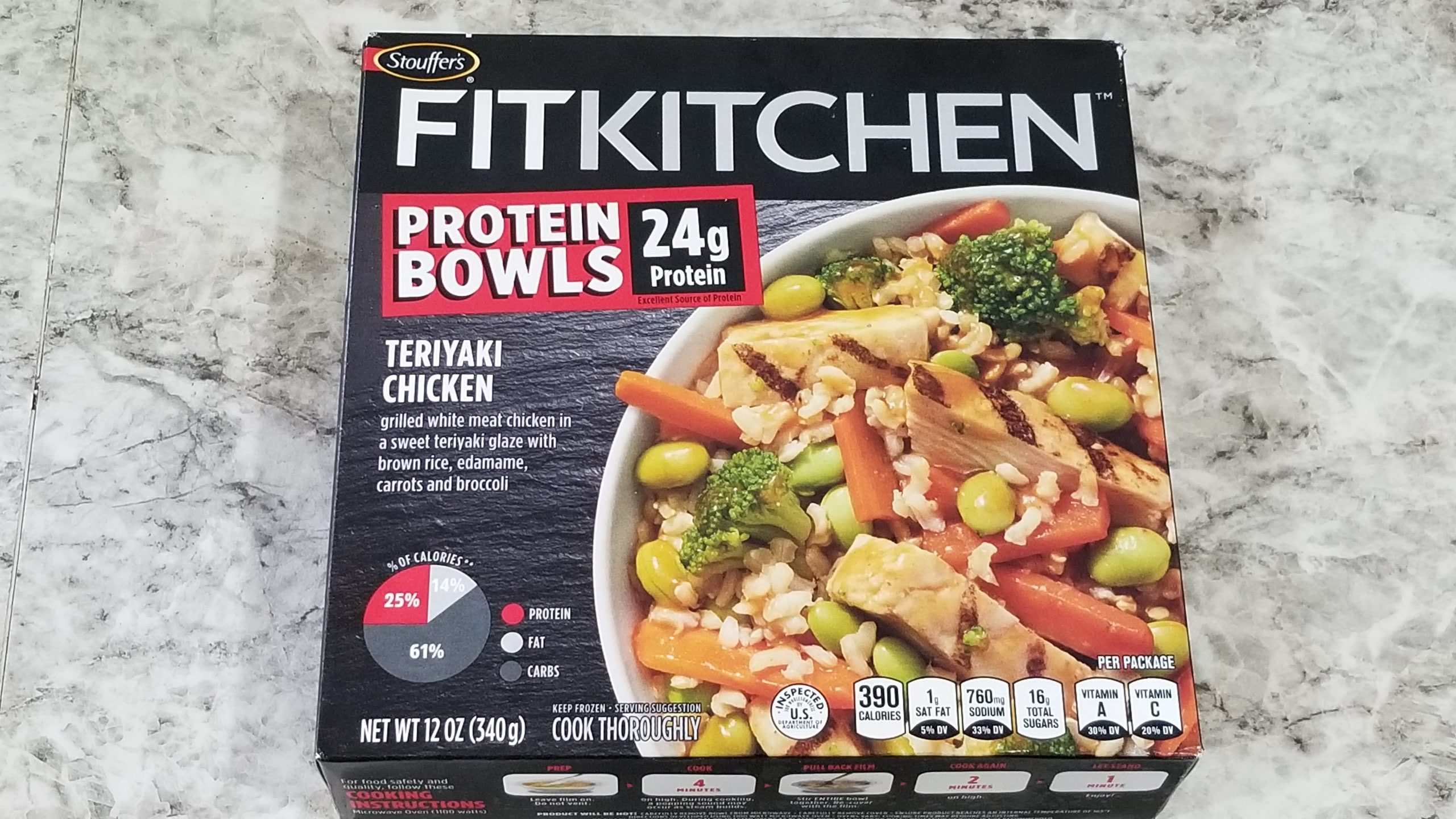 Fit Kitchen Teriyaki Chicken is coming after the beef one we did yesterday. It was another one of the frozen foods that I scooped up with my $10 Walgreens gift card.

If you didn’t get a chance to read the other review, I went in for a flu shot the other day and a sales rep was there for a newspaper.

After he told me they were two steps from bankruptcy just like the Washington Post (which isn’t bankrupt, it’s definitely not) I figured that I wanted to read the newspaper anyway and signed up. Since I did that, I got the Walgreens card and figured I’d invest it in some frozen food to review.

Fit Kitchen is a brand owned by Stouffers, a food company that’s been around for almost as long as time itself. Maybe not quite that long, but you get the picture. About five years ago, Stouffers launched their line of Fit Kitchen meals to try and appeal to more men in the freezer aisle.

I guess it worked, since I grabbed two of these without thinking much of it other than that I was reviewing some more frozen meals. Their marketing worked!

For a while, at least according to the old press releases, these meals originally all contained 25 grams or more of protein. As we’ll get to later, that’s been slightly dialed back a bit.

The Stouffers company was officially started in the ‘20s with a restaurant. According the Wikipedia, they got into the frozen business in the late ‘40s. According the company’s website, it was 1954 that they began creating frozen entrees.

The Front for Our Fit Kitchen Teriyaki Chicken Review

The front of the box shows a similar red label to the last one that lets us know there’s 24 grams of protein in this. The Teriyaki Chicken stamp is proudly on there with a description underneath. They also have the calorie percentage on a pie chart listed in the lower left-hand corner.

The picture of the meal looks pretty appetizing with the grill marks on the chicken and everything. The edamame, carrots and broccoli also look pretty tasty. They stick the major nutrition facts on the front, too.

I’m assuming it’s that way so you can see its benefits without needing to reach into the freezer case and take anything out.

Let’s not forget the massive amount of protein lining the inside of this bowl. That’s 24 grams! Another nice thing is that the sodium as actually pretty low (760 mg or 33% of your DV).

There’s also a decent amount of fiber in there.

For our ingredients, you’ve got cooked brown rice, cooked white meat chicken, maltodextrin, wait – MALTODEXTRIN? I guess so. Was not expecting that in here. If you consider all of the good things in this Fit Kitchen Teriyaki Chicken like edamame, broccoli, carrots, and garlic, I think we can look past the old malto-to-the-dextrin.

These cooking instructions keep it simple like Fit Kitchen’s other bowls. You just need to start off by popping it into the microwave for four minutes on “high.” After that, get it out, take the cover off, stir it around and throw the bowl back in for another two minutes.

The film was easy to remove and this was not as frozen in the middle (halfway through) as the beef one was. After having it rest for a minute when it came out, this thing was ready to eat.

The food actually looked pretty close to the picture on the front of the box when it was done cooking, too.

The cooking time was a little long.

The beef bowl was a hard act to follow. This Fit Kitchen Chicken Teriyaki did beat the beef on presentation. I wasn’t expecting that for some reason.

My first impressions were good. The teriyaki sauce was sweet but not too sweet. The chicken wasn’t bad either. It reminded me of the same chicken in that chicken teriyaki they have at Subway.

The edamame and broccoli were fine, but they both brought a lot of wateriness into the meal. I’ve had the same issue before with things like cauliflower mac & cheese. There may not be a way around this since it would sacrifice freshness for taste if they were overly dried out.

Because of those vegetables, mostly the edamame, this didn’t come close to being as good as the beef bowl. However, it was still tasty enough and it also gave me solid energy in the afternoon.