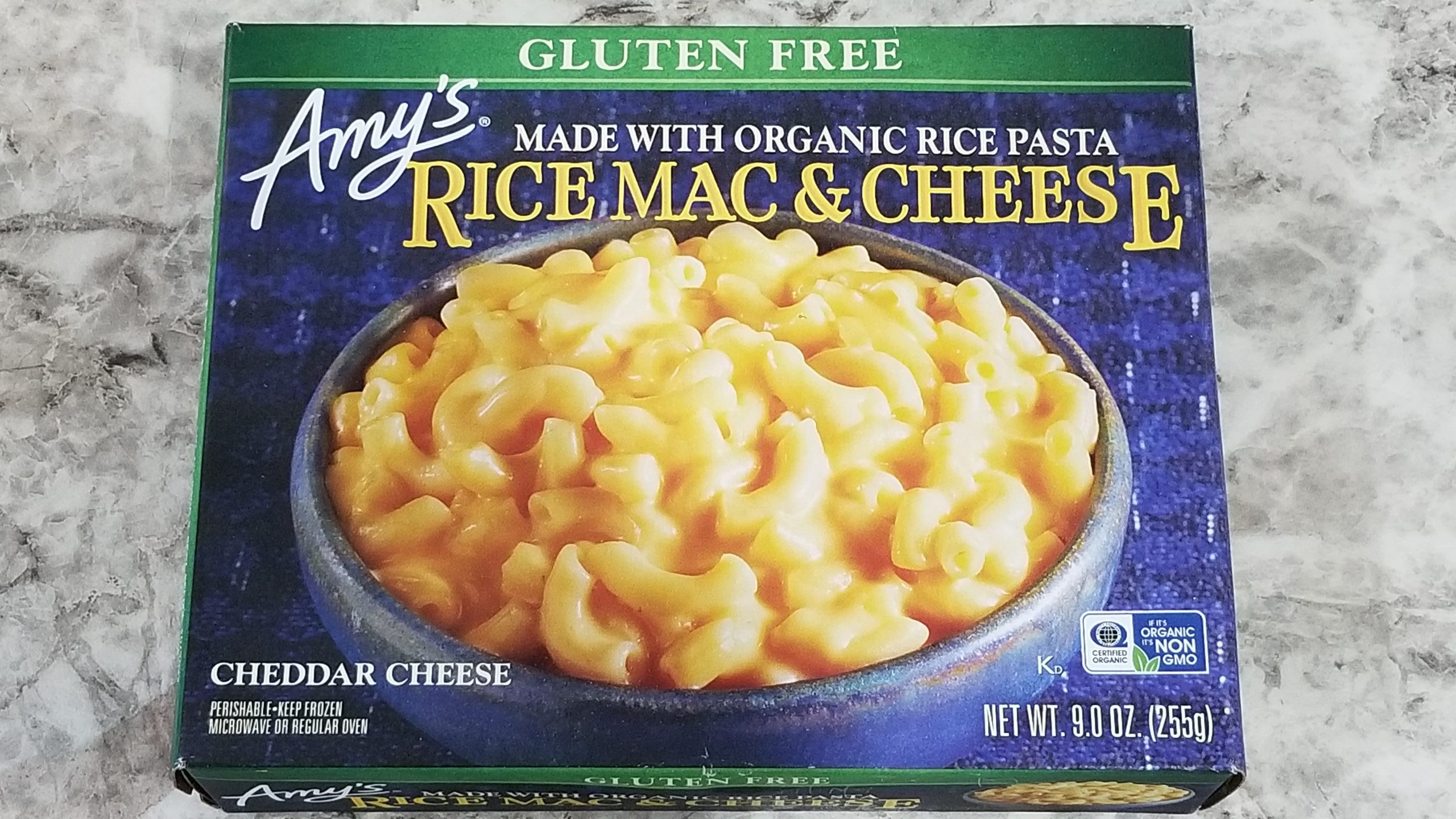 Amy’s Rice Mac & Cheese marks the first time we’ve tried gluten-free rice noodles. Ever. Since it’s an offering from Amy’s, it should be decent one way or another given their reputation for good food.

Our previous reviews of their stuff have been pretty positive. Personally, I eat a ton of rice. I also happen to like mac & cheese, so it seems like a no-brainer to give this a try.

This food company was cooked up when two parents welcomed their daughter Amy into the world and realized they were short on time to cook their favorite healthy foods. They started the business because they realized there were also other people out there who were short on time but wanted to eat healthy. Their strategy of no meat, fish, shellfish, poultry, eggs or peanuts has been going strong for over 30 years.

Personally, gluten doesn’t noticeably affect me at all. I’m still excited to try Amy’s Rice Mac & Cheese and maybe I’ll decide this is my new go-to over the old-fashioned stuff. A lot of athletes tend to avoid carbs with gluten in them as a best dietary practice. People who have Celiac disease can’t eat gluten at all because it will damage their small intestine. For that reason, this may be one of the best mac & cheese options out there for someone with that disease.

Front of the Package

The front of the box shows us the mac & cheese front and center with its title above. There doesn’t appear to be a major difference in looks with gluten-free mac & cheese and the type that contains gluten. The good news with that is you won’t need the blindfold for any blind taste-tests!

There’s also a reminder that you get Cheddar Cheese with this, it’s 9 oz’s, organic and non-GMO. We’re about to eat a pretty natural meal here.

The nutrition facts for Amy’s Rice Mac & Cheese show that this makes a pretty solid meal given the calorie count at 460. It has a good balance of protein, carbs and fat (especially for mac & cheese). You’re looking at a little over half of your daily value for saturated fat. I personally eat a lot more protein, so, the protein in this is more like 9-10% of what I put down in a day. There’s also some nice calcium in there!

Your noodles in this are made of organic rice flower. There’s some organic low-fat milk, so if I had to guess I’d say that’s probably not where the fat comes from. Probably more like the cheddar cheese and butter, in case you were wondering.

The great thing about these cooking instructions is that the microwave ones will work well for you. Not everything we review pops out after 3 minutes as cooked as it’s supposed to be. This, on the other hand, definitely did. After I put it in for the second 2 minutes, it was hot and ready.

You will definitely notice a different taste with this Amy’s Rice Mac & Cheese being gluten-free. I wasn’t sure about it at first, but after the second bite, I ate the rest pretty quickly.

The cheddar cheese in this is really good, probably because you’re getting it from the natural ingredients Amy’s uses.

I personally eat a lot of white rice and other gluten-free grains like millet. This is the first time that I’ve ever eaten pasta that’s essentially made of rice, though. In a weird way, it tasted like I was eating cheesy rice, but it was definitely still good mac & cheese.

All said and done, it was pretty tasty and I’d buy it again.

If you’re a fan of gluten, this might not be for you. It might taste a bit strange. However, you should still consider picking one of these up some time.

I ate this at about lunch time and it did seem to help me stay energized and focused throughout the afternoon. Whether you’re eating this later at night or during the day (as long as you’re not lactose intolerant) it should sit pretty well with you.

It’s worth picking up. If you’re trying to decide on a side dish at a dinner for two, this could be a nice edition.