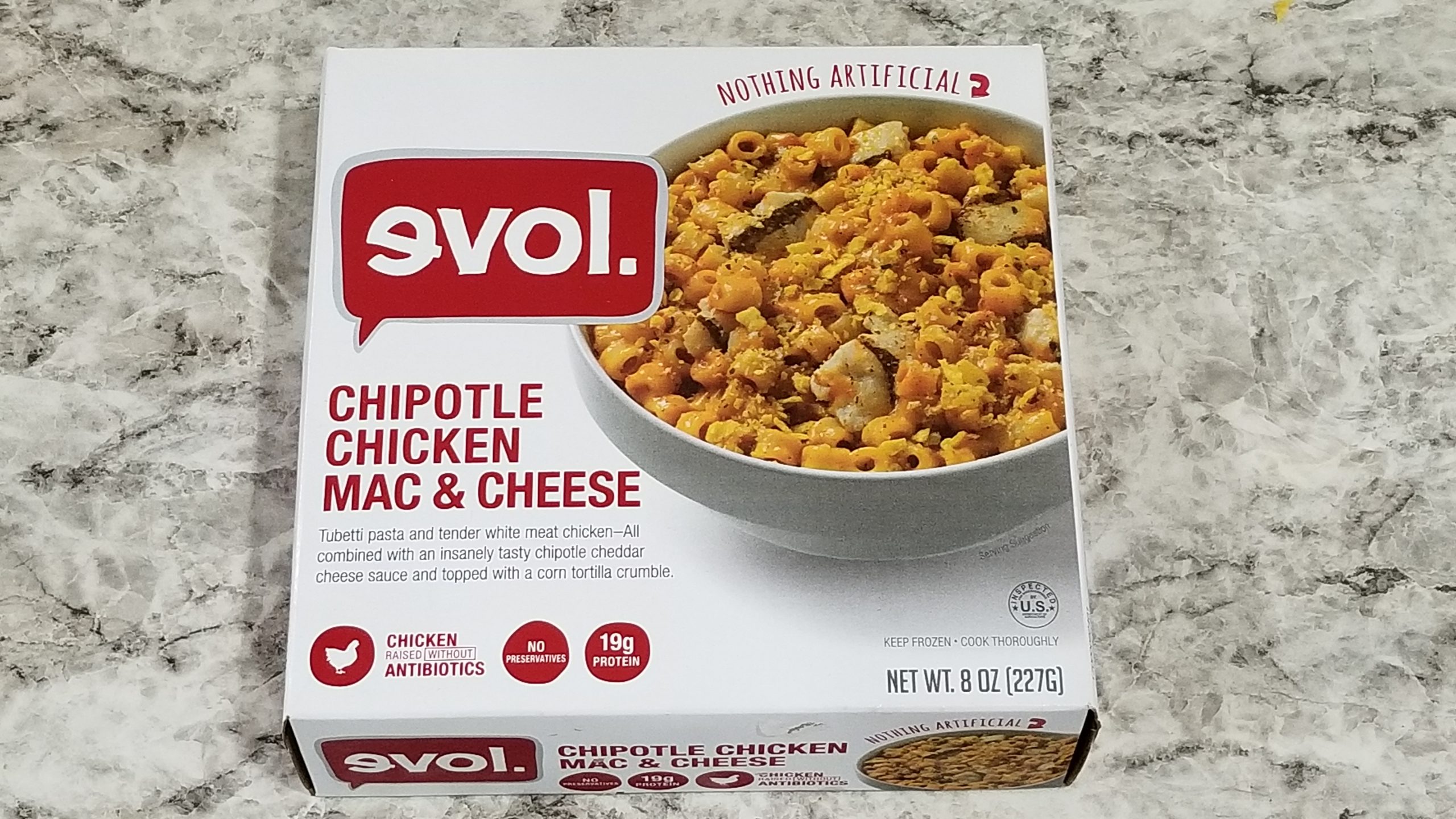 After Target was nice enough to give me a $5 coupon for getting my free flu shot, I figured I’d take a swing through the freezer section. This got my attention and now we’re going to take a look at it.

It isn’t the first Evol meal we’ve reviewed, with a different one going into the books last year. These frozen meals are a little bit more upscale than other ones and cost a bit more, too. This Evol Chicken Mac & Cheese ran about $4.50-ish for me. The price can vary from store to store.

“Good is Evol” as they say. Evol’s “about” page is pretty funny on their website. They like to remind their customers that nothing worthwhile comes easy. This brand emphasizes serving its customers non-science lab food. Their chicken in this meal is antibiotic-free and doesn’t use any animal by-products, either.

Their aim is to turn the status quo upside down by offering foods that still taste great after being zapped in the microwave. They might turn up down and down up, who knows?

Front of the Box

The front of the box greets you with an awesomely detailed picture of the evol chicken mac & cheese with chipotle in a white bowl. There’s a reminder that says it doesn’t have anything artificial in there, too. The meal itself also gets a description that touches on a few major parts of it for you.

It contains tubetti pasta, a type most often used in soups. I’ve definitely had some Italian wedding soup with this pasta mixed in before. Can confirm, it’s pretty tasty. The protein is their tender white meat chicken, without all the antibiotics, of course.

On top of that, there’s the chipotle cheddar cheese sauce topped with corn tortilla crumble. Sounds like it should be tasty when we try it.

This evol chicken mac & cheese meal is pretty well balanced. You get 26% of your daily fat recommendation, 30% of your protein, and 33% of your carbs. I was actually expecting more sodium in there, so kudos to them for keeping it at that level. Each bowl is 8 oz, or 227 grams.

These run at 430 calories, which should be pretty substantial for you as a lunch option if it’s accompanied by some fruit and another side. It wouldn’t be bad late at night, either.

Ah, the ingredients. For this brand, these ingredients we’re about to dive into are what sets them apart from other ones. Except maybe Amy’s, they keep things pretty natural.

Just as they promised on the front of the box, there really isn’t anything artificial in this. There are even some fun surprises that you won’t be expecting, like light brown sugar, honey and parsley. I didn’t really taste that, but I’m guessing it’s part of the seasoning mixture.

The cooking instructions are pretty simple and straightforward. You just need to remove the plastic bowl from the box and remove the film from the plastic bowl. Your choices are then to cook it on “high” in the science oven for 3:30 then let cool for a minute.

Alternatively, you can preheat the regular oven to 350 degrees and bake it for 40-45 minutes. Don’t forget to cover it in foil and place it on a baking sheet if you do that.

Other Offerings From Evol

The company also showcases some of their other foods on the back of the box. They include burritos, enchiladas, ravioli, and steak. What don’t these guys make?

I decided (as is tradition) to cook this evol chicken mac & cheese in the microwave. If I’m up at 2:30 in the morning, ain’t no time to pre-heat that oven and cook something for almost an hour. The actual cooking time didn’t quite get it done, so I ended up putting it in for another minute. Total cooking time for me was 4:30 and that landed it at a nice temperature.

Like most frozen foods, it didn’t quite look like the picture when it came out of the science oven. However, after stirring it around a bit, the food looked pretty close to the picture. That’s not something every brand can say their food does!

The tubetti pasta had a great consistency. The cheese sauce and the corn tortilla crumbles were also great. At first, they seemed a little like panko.

The chicken was good. A few bites were actually a little tough, but all in all I’d chalk this up as being tasty all around. It’s not easy to have a preservative-free meal taste great. I think we tend to take that for granted.

The spiciness may not be for everyone. Make sure you have something to drink with this, because there were a few times that I had to slow down. It’s not a bad thing, but if you’re really sensitive to that, just a heads up.