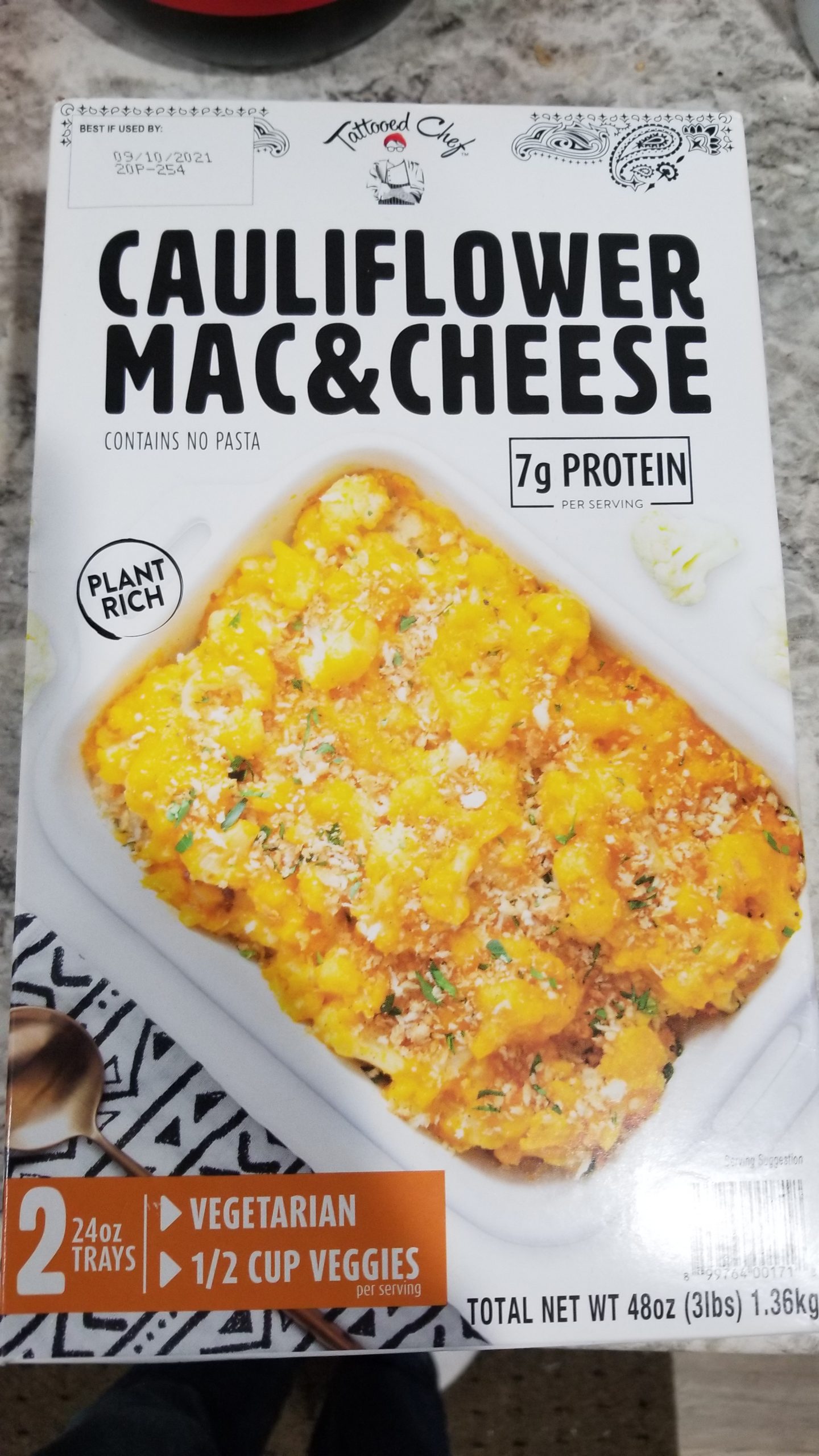 Cauliflower Mac & Cheese probably isn’t your grandparents macaroni and cheese. For starters, it doesn’t even have macaroni in it! But cauliflower is pretty tasty, panko is pretty tasty and cheese, I mean, yea. Not much more to say about the concept being great.

This comes from the Tattooed Chef company.

The Company Behind This Cauliflower Mac & Cheese

These stories are part of the reason I love doing Midnight Snack. It isn’t the first lone-founder business where someone got inspired somewhere in the world to start a food brand back home in the states. That’s what happened when Sarah Galletti, the founder of Tattooed Chef was working at a pasticceria in Europe during college.

According to the company’s website, Galletti had a dream about the company. Ever since then, she’s been bringing these unique and tasty foods to people’s freezers. Needless to say, I’m pretty pumped to try this since I’m also kinda Italian. I think 25% counts as kinda.

It looks pretty good in the front. We’re reminded right away that there’s 7 grams of protein per-serving. Considering I’ll pig-out on a tray mostly on my own, that’s probably three or four times the protein for me! It’s also vegetarian and contains no pasta. Looking good so far, cauliflower mac & cheese.

For Mac & Cheese (or a mac & cheese substitute) this has a surprisingly low level of fat in it. The protein, as mentioned on the front of the box is also substantial. Even the sodium is pretty low for what this is. Cauliflower mac & cheese is lookin’ pretty healthy!

Pretty straightforward, this is mainly cauliflower, cheese and all the ingredients that make up the panko. The only thing I wasn’t expecting to see in there was the onion. Never heard of annatto until now either. It’s a type of food coloring (as the label explains) derived from seeds of an “achiote” tree.

The cauliflower mac & cheese is actually manufactured by the Tattooed Chef company, which is nice to see. That means tighter quality control (probably) and overall more oversight by the people who care about the food. The people who give a crop.

You have two options with this. One, you can stick it in the oven (which I did) or two, you can microwave it if it’s late at night and you can’t mess around with an oven. Since I only made one tray for this review, I will be trying the microwave method for the second one in the box.

If I’m being really honest, I was a little bummed out by this cauliflower mac & cheese. Because it said “mac & cheese” on the label, I was thinking that I’d be getting just that, mac & cheese. Instead, it’s really cheesy cauliflower with a little panko and some other seasonings mixed in.

My Other Cauliflower Mac & Cheese Hiccup Was Taste

The whole thing seemed a little watery, which might be one of those things that couldn’t be helped. What I’m thinking is that if the cauliflower was completely dry, then it may not have tasted very good at all. The cheese was also kind of tough to swallow.

It sort of tasted like someone just layered a few Kraft singles on the top of the cauliflower and sprinkled some panko in there. My expectation was that this would be more like the Trader Joe’s Pepperoni Pizza Mac & Cheese where the cheese was intermixed throughout. I was not magically expecting pizza to appear in this one, though.

I think if I had adjusted my expectations going into this, I would have thought about it a lot differently when I was chowing down. Frankly, I’ve almost been too critical, but, I shared some of this with one of my roommates and he steered me in a better direction.

Overall, he liked it. He never saw the box or the name (which might have gotten his hopes up) and he did say he thought it tasted fine as a side dish. This is a guy who also eats a ton of frozen food products, so I trust his judgment of the cauliflower mac & cheese.

It all depends on how badly you want this to taste like regular mac & cheese.