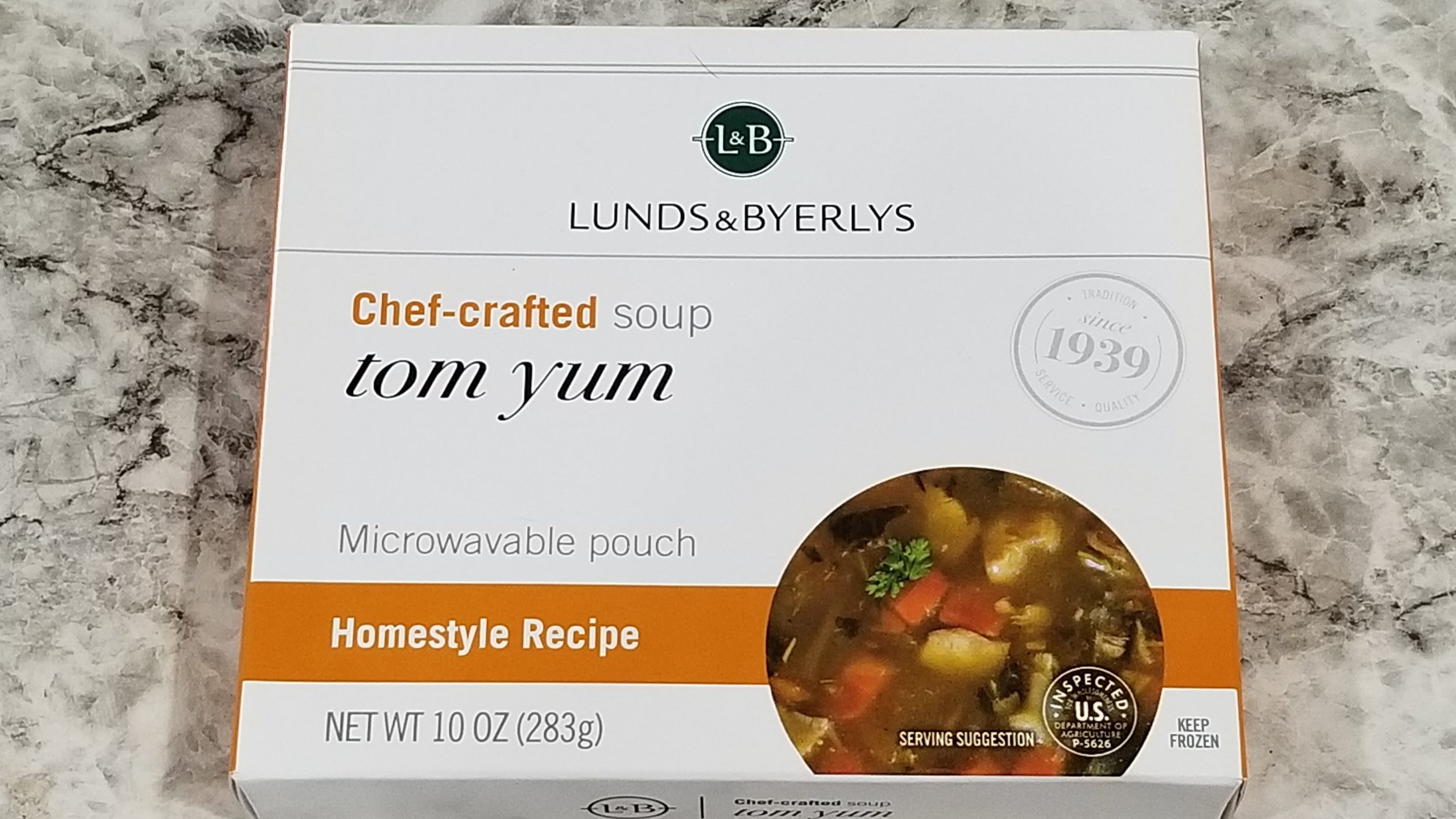 Tom Yum soup from Lunds & Byerlys sounded pretty…yummy when I saw it in the freezer.

Following the review of the vegetarian chili, this one seemed like a good fit to tackle for a Midnight Snack. But what exactly is Tom Yum?

This is a Thai soup that’s meant to be hot and sour (trust me, we’ll get to that!). “Tom” describes the boiling process, while “yum” means mixed. I believe that’s referencing all the mixed ingredients in it. Some of the traditional ingredients in this include lime juice, kaffir lime leaves, lemongrass, and fish sauce.

In the soup we’re looking at today, it’s got a lot of those traditional ingredients in it. Again, we’ll get to it. I’m pretty sure that my favorite Vietnamese place serves some variation of this with the dinner combo I always order. Maybe, maybe not. It’s hard to remember with this whole quarantine thing going on when I haven’t been there in a zillion years.

The front of this package features the standard Lunds & Byerlys logo and store name. We’re reminded that this is Chef-crafted soup. I’m reminded that I didn’t need to capitalize “tom” in “tom yum soup” above because it’s not a guy named Tom, it’s a Thai word for a boiling process.

The picture of the soup looks decent. There are some carrots in there, some white stuff that I think might be the chicken. You will notice some shiitake mushrooms if you look really hard at it. I also noticed what’s probably the kaffir lime leaves in the upper left of that picture.

Right off the bat, we notice that this tom yum soup is pretty low in calories. It really doesn’t pack that much of a caloric punch. There’s a respectable amount of fat in there. You won’t get too much or too little. Your cholesterol won’t go up either when eating this, WHEW!

But then in walks your sodium.

Drink a lot of water when you eat this, there’s almost half your daily recommended amount of sodium in this. I put down a liter of water after eating it.

I was actually kind of soup-rised at how low the different vitamins and minerals were. Mainly, I was expecting way more Vitamin A because of the carrots. Anyway, let’s check out those ingredients.

The first main ingredient you get is soup broth itself. That comes packed with way more things than I thought it would. Some of the galangal root’s in there and the kaffir leaves, too.

I noticed the yellow onions right away when I ate it, although, those were never showcased as a main attraction on the box.

Same with the Bok Choy.

You won’t be expecting it, but, yea. It’s in there.

What Is Galangal Root in tom yum soup?

In case you were as curious as I was about what galangal root was in the tom yum soup, we’re finding out right now. It’s a spice that’s a little bit similar to ginger root (surprise surprise, they’re both roots).

It’s been used in holistic medicinal treatment for thousands of years. As I’ll address soon, that totally makes sense.

Arguably, you need to be more attentive with the microwave because of the multiple steps involved. On the stove, it’s just getting water to a boil and dropping in the bag of tom yum soup to roll around until it looks done.

The old tom yum soup. I’ll start with the things that I wasn’t crazy about. First, it’s a little too light on the calories for me. I like a more calorie-dense soup. You don’t get as many nutrients as I thought you might, either. There’s also a little more sodium than I was ready for.

On the other hand, I drank a liter of water after and I was fine. The broth tasted great. It was a diverse mixture of a lot of different things as we noticed in the ingredients. The spices are pretty strong, so be ready for that.

The carrot, chicken and shiitake mushrooms were all awesome and you’ll enjoy those.

I wish there had been more vegetables in the soup, it felt kind of empty there.

This tom yum soup is really great if you need something medicinal. That’s evidenced by the ancient medicine ingredients found in the broth along with the fact that it cleared my sinuses pretty fast when I ate it.

I can’t recommend it as a solid lunch soup because it’s so low in calories, but eating it as an accompaniment to a sandwich and some other food would be fine. Late at night, especially if you’re sick, it would be great.