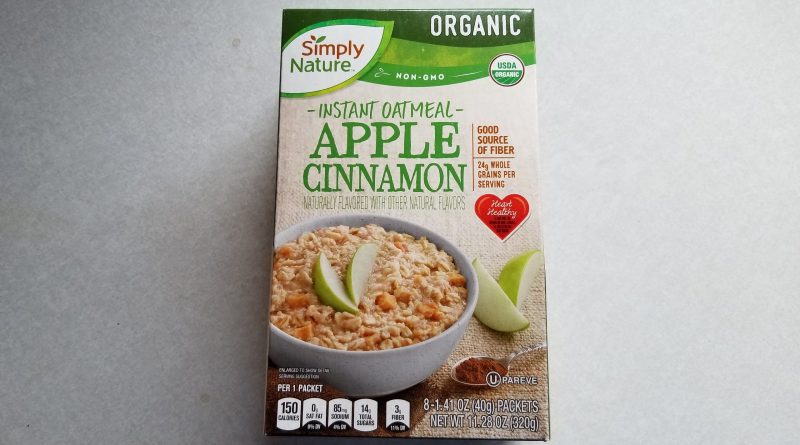 Simply Nature Apple Cinnamon Instant Oatmeal is in my bowl today. It better be, since oatmeal just wouldn’t fit that well on a plate! This is a good change-up for breakfast over regular cereal, although I usually eat both nowadays.

I’ve been eating oatmeal for as far back as I can remember. It’s been mostly steel-cut oats in the past, but there have been periods where I’ve eaten a lot of the instant stuff that I’ll be looking at today.

The greatest thing about instant oatmeal by far is that it doesn’t require any measuring. You can keep packets of it here and there, pour them into a bowl with some water and you’re set.

Some even have water lines drawn on them for measuring. This Simply Nature Instant Oatmeal from Aldi is non-GMO, USDA Organic, and a good source of fiber (according to the front of the box).

There’s also some Granny Smith apples in it. Who was she anyway?

Each packet of this has 150 calories in it. That’s about standard for oatmeal based on anything I’ve ever eaten. Not much fat, makes sense. It’s mostly carbs, kind of expected that. I mean, it’s a meal made of oats. There’s a little more sugar in this than I was expecting.

I know that I need a little sugar to start the day, but making two packets of Simply Nature Apple Cinnamon instant oatmeal will load me up on a bit too much as far as I’m concerned. If each pack had about half the current amount, that would be perfect for me.

Then there’s the Aldi Twice as Nice guarantee, as is tradition. The box is also recyclable and the multi-layer pouch is not, I think.

Frankly, anything with dried fruit in it works for me. This has some dried up Granny Smith apples which aren’t bad at all. The amount of sugar, organic or not, does kind of bum me out, though. My teeth can only handle so much added sugar per day, I’m telling ya.

As long as I didn’t load up on too much other sugary stuff like granola bars earlier in the day or anything else like that, this is fine. The Simply Nature Apple Cinnamon oatmeal definitely tastes good, no question about that. At my Aldi, they run about $2.15 for 8 packets. I feel like that’s a pretty good price.

It’s tough to beat the price of bulk steel-cut oats at Sam’s Club or Costco, but this is also a convenient amount. I could see myself buying these for a road trip or something.