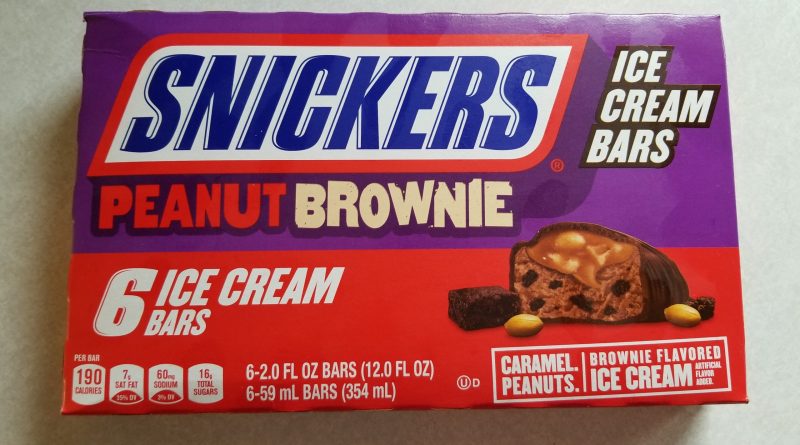 I’m having Snickers Peanut Brownie Bars for dessert tonight. Found them in the freezer section at Aldi and felt like they had to come home with me. Look, I’m all about staying healthy and eating things like the Moser Roth bars for dessert, but, sometimes you need some ice cream.

Whoever came up with the idea for Snickers and ice cream combined, they need an award. I haven’t even reviewed this dessert from Aldi yet but it’s just the idea in general.

Ah yes, the unmentionable part of all dessert items: their nutrition facts. Let’s take a deep dive into the facts behind the 190 calories in these.

Maybe it’s just me, but I can’t sleep at all if I have too much saturated fat. For some reason, it makes me heat up a bunch and I need to crank the AC or turn my Chili Pad’s temperature down to get to sleep.

There’s less cholesterol in these Snickers Peanut Brownie Bars than I thought there would be. Carbs are about what I expected. There’s also less sugar than I was anticipating.

You figure that if something is a combination of three really sugar dessert items, it’ll probably be loaded with the stuff. Evidently not.

Tiny bit of protein, not much in the way of vitamins or minerals.

The ingredients for ice cream are always interesting. We don’t need to go line-by-line here but let’s just check a few of them out. The nice thing is that they do break the Snickers Peanut Brownie Bars ingredients’ down by which part of the bar they’re in.

The ice cream itself is pretty complex, even some sub-parts are in there. We’re looking at the basics to start: skim milk and cream, makes sense so far. Then we’re jumping to the brownie pieces, which definitely add some science-y sounding terms here.

Reduced iron and thiamine mononitrate are two of them. Can’t forget about the guar gum or the carrageenan. Pretty sure that these are the ingredients to a lot of dessert items, not just this new one. There’s a fair amount of dairy in all of the Snickers Peanut Brownie Bars ingredients.

I decided to make myself earn one of these. Before eating one, I did leg lifts for a minute each, about 4 inches off the ground 10 times. That included 1 minute of rest in-between.

By them time I was done, I could barely move. Using every once of my energy, I crawled downstairs to the freezer to rip into the box of Snickers Peanut Brownie Bars.

Boy am I glad that I did. Not only is the packaging for these fun to look at, the bars are also actually pretty big. They’re about the size of a regular Snickers bar, which is fun.

Personally, I don’t love caramel, but when it’s in a Snickers bar, I do. They manage to get just the right balance of everything in there between the peanuts, ice cream, chocolate and brownies. I had to be careful I didn’t eat a second one.