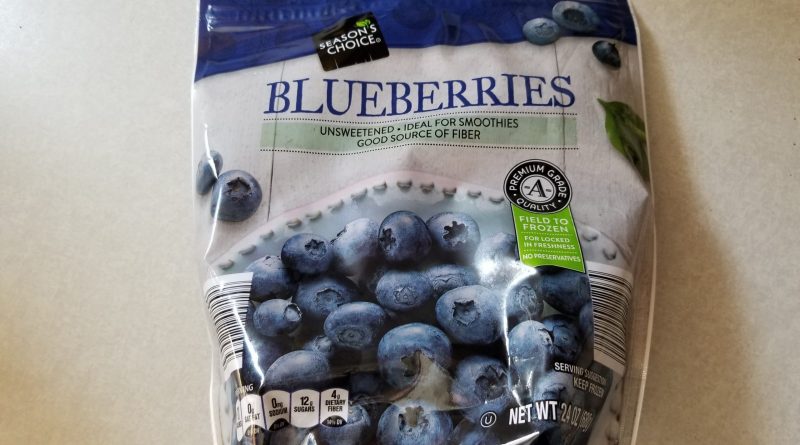 Seasons Choice Blueberries are going in my oatmeal today. I usually just eat a frozen berry mix from Sam’s Club or their giant 4 pound bag of blueberries, but, today we’re doing something different.

Seeing as I’m reviewing things from Aldi these days, I thought I should really try their frozen fruit. I’ve eaten more than my fair share of unhealthy snacks, so, it’s time to make my doctor proud.

There’s a lot of things you can do with seasons choice blueberries. You can make a pie, a muffin, or even dehydrate them. They come with a lot of fiber, too.

Not sure if you’ve seen Willy Wonka, but, he caps off his three course dinner-flavored gum with blueberry pie. Then, of course, we get to see that girl (ironically named Violet) turn into a giant blueberry.

I always wonder what kind of real life lawsuits would happen if there was actually a guy with a candy factory doing that stuff. All Gene Wilder talk aside, let’s actually review these bad boys.

These aren’t the giant bags that I’m used to. However, there’s definitely a place in the world for a smaller bag of frozen fruit. Sometimes, I can’t even fit the Sam’s Club one into the freezer all the way. For that reason, I do see some value in the conveniently-sized bag of Seasons Choice Blueberries.

Each serving of these is one cup and 70 calories. You won’t see much in the way of fat, cholesterol, or sodium in these. As expected, though, the Seasons Choice Blueberries do pack a couple of carbs.

You’ll get 6% of your daily value out of that and 4 grams of daily fiber. That’s 14% of your daily fiber value, not too bad. Most of those carbs are made up of 12 grams of sugar (but no added sugar). This is the good kind of sugar.

After that, there’s not much else in these at all.

They’re blueberries. Not much more to say. Some ice in there, I guess. Water, technically. Yea.

Here’s where we find out if these Seasons Choice Blueberries stack up to other stuff I’ve bought at Sam’s Club in the fruit arena. They almost taste sweeter, which is an interesting twist since they have less calories. I’d expect more if they taste the way they do.

Ultimately, though, blueberries are blueberries. In the case of Seasons Choice Blueberries, they work great in oatmeal, with cereal, and anywhere else that I can think of putting them. Seriously, no complaints about these from me. I do kind of wish the bag was a little bigger because I’m so used to buying giant ones, but, I know that there’s also some clear benefits to a smaller package.