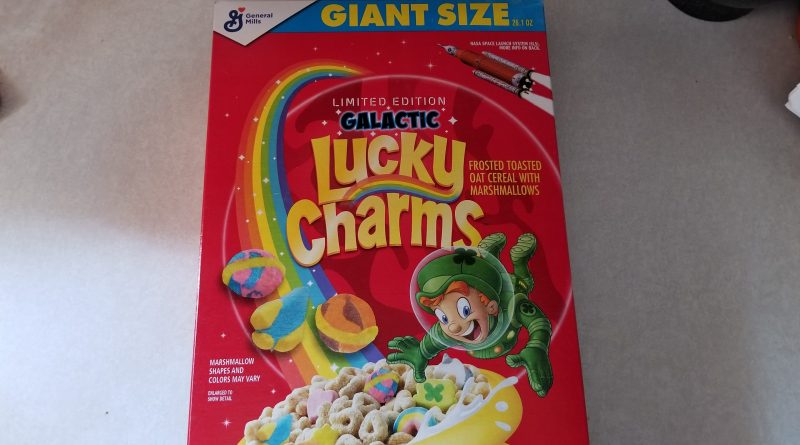 Lucky Charms are in my bowl today for a little review action. I’ll be going over all the important parts of eating this cereal, from the way the box itself looks to the nutrition facts. I recently bought this at my local Aldi in their Aisle of Shame.

I think I always felt a little lucky if my mom decided to grab this cereal at the store. Unfortunately, that just didn’t happen super often because this is sugar cereal with marshmallows. Similar to Cocoa Puffs, I had to wait until adulthood to really start enjoying this often.

The best I got back then was usually Peanut Butter Crunch, which, frankly, isn’t much better than Lucky Charms (nutritionally speaking). Nothing against Captain Crunch and his peanut butter, but, that stuff really does cut the roof of your mouth. It’s good, but, my mouth’s roof gets wrecked every time I eat it.

Lucky Charms, on the other hand, does not cut the roof of my mouth. It’s almost like Cheerios with marshmallows in it.

This consumer favorite was started back in 1964 by a guy at General Mills named John Holahan. According to General Mills’ website, it came out on St. Patrick’s day, too. Makes sense.

Let’s take a look at some of the nutrition facts and see if Lucky Charms are really all that bad for you or if there’s some redeeming qualities to this cereal. I gotta imagine the marshmallows are bad either way with all their fun coloring, but, yea.

In this massive box, we get 20 servings. Each serving is a cup and hits you with 140 calories, pretty standard compared to other cereals like the Aldi Cheerios knockoff I had recently.

There’s hardly any fat to speak of in these Lucky Charms, but there’s a small bit of all of the big types of fat. There’s a little sodium, 10% of your daily value.

There’s a little bit of protein in there and a whole lot of different vitamins and minerals. I feel like those aren’t appreciated enough. Given all the iron, thiamin, zinc, B12, B6, and Folate this packs, it sure looks healthy to me.

You also get a decent amount of vitamin A, C, D, and calcium before adding milk. Not bad at all Lucky Charms, not bad at all!

The Lucky Charms only contain 2% or less of the weird ingredients. Those include fan-favorites, such as trisodium phosphate, a handful of color dyes, and tocopherols. Mmmm, tocopherols.

Because this is the Lucky Charms Galactic edition, they have some extra crazy marshmallows in there. You can expect things like planets and space ships, to name a few of them.

The leprechaun guy is also in a space suit, that’s pretty wild. There’s also a rocket taking off in the top right corner of the box, very space-y.

Ultimately, though, these just tasted like the regular Lucky Charms that I’m used to eating once in a while. The giant box is nicely sized. They have that kind-of-sugary but not-too-sugary taste to them.

The marshmallows (called “marbits”) are sort of crunchy more than squishy like campfire marshmallows. All in all, it’s a good cereal with a lot in the box if you go with a giant size.