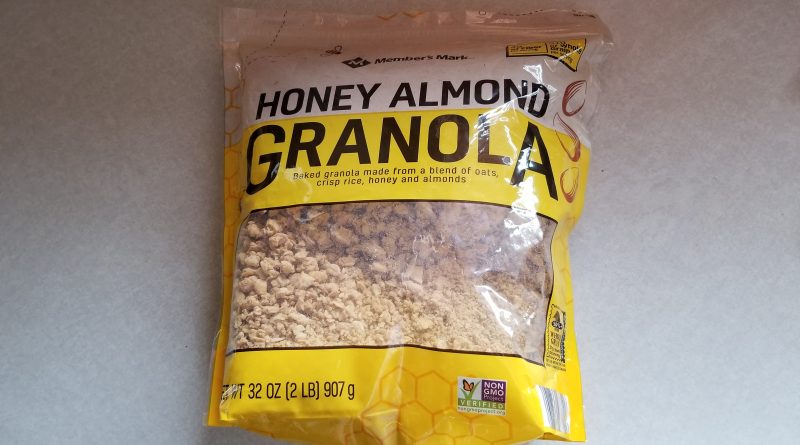 Member’s Mark Honey Almond Granola has been a staple in my diet for a few months now. I’m a little surprised at myself for not writing something up about it sooner, but it slipped my mind. Granola has a lot of health benefits, including lots of fiber and healthy fats.

If you want to get motivated to eat a diet that’s a little healthier, this might be a great food to start with. Most granola out there has a lot of sugar, so it shouldn’t feel like a chore to eat it. That being said, you should eat it (and any other food for that matter) in moderation.

I got into eating granola as an accompaniment to my yogurt and fruit for breakfast during college.

All it took was that first spoonful and I was hooked. I wish I knew where that dining hall granola came from, but, the past is the past. The Member’s Mark Honey Almond Granola from Sam’s Club came pretty close to the taste of that. Today I’ll take a bite of it and give you a play-by-play analysis on everything in it, how the current bag I just got tastes, and everything in between.

You will get similar nutritional info in these compared with other breakfast cereals like Cheerios. At least similar to the ones that are healthier.

As I mentioned, these have similar nutrition facts to a lot of the healthier breakfast cereals out there. A major difference, though, is that they are a lot more calorically dense than any cereal I can think of. Coming in at 260 calories for 2/3 cup, the Member’s Mark Honey Almond granola isn’t exactly a lightweight contender.

Part of the reason there’s so many calories probably has to do with some specific ingredients that pack a lot of them in small amounts. We’ll get to those soon. You’ll be looking at 8 grams of fat with one serving of this, too.

Getting down to the vitamins and minerals, this thing’s loaded with those. From largest to smallest, you’ll get 50% of your daily manganese then 15% of a few metals like selenium and copper in this Member’s Mark Honey Almond Granola. After that, there’s a handful of other things that run between 2 and 10% of your daily values.

This has a lot of different things in it. Some you might expect and others, not so much. The title was probably a dead giveaway that honey was an ingredient. In addition to your honey, you’ll be looking at crispy rice, whole rolled oats, and crunchy almonds (lots of calories per oz).

Even if you already make regular oatmeal part of your diet every day, adding in one serving of these won’t over-oat you or anything. At least it shouldn’t. Unless I’ve been suffering from oatitus this whole time and I haven’t realized it.

I think my Member’s Mark Honey Almond Granola would have had the decency to tell me that.

So, I already hinted at this but I like the stuff. If you have nut allergies or can’t handle a little coconut (apparently that’s in it somewhere) then you won’t. Avoid it if you have any nut allergies at all. I gotta imagine there’s some gluten in there somewhere, too. One nice thing about this is that it’s also non-GMO, too.

Most of the cereal I review is at least a little GMO, if you know what I mean.