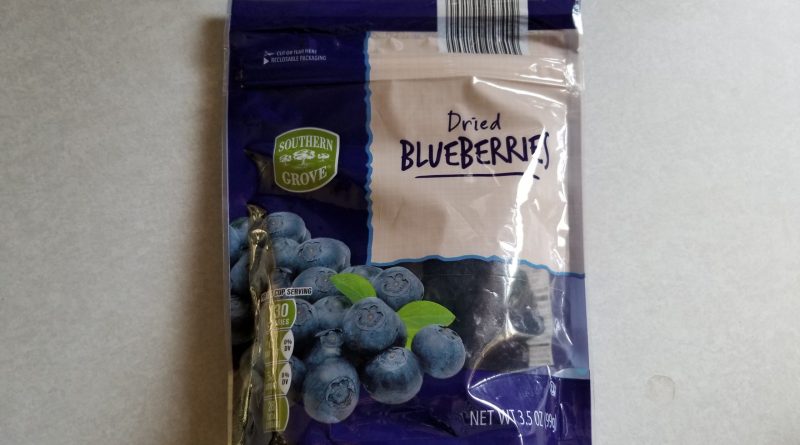 Southern Grove Dried Blueberries from Aldi are like a bag of the blueberries you get in cereal. The difference is that you get way more and you aren’t picking through tons of cereal to get at them.

These are among a number of different dried fruit options that Aldi has to offer. I consider myself a fan of fruit in general. It’s good for you and has the right kind of sugar.

Unless you’re eating fruit rings or other kinds of fake fruit. Those probs won’t give you the benefits of straight up fruit. Maybe I’m wrong and those peach rings can actually prevent scurvy. Gummy cherries could always be worth looking into, who knows?

I don’t think I’ve ever found candy blueberries, but these Southern Grove Dried Blueberries from Aldi are the next best thing. They run a little on the more expensive side at $2.55 for about 3/4 cup of them. There’s a price to pay for the convenience of being able to keep blueberries outside of the refrigerator, I guess. You may want to look at a regular pint or some frozen ones if your goal is to get blueberries and save money.

That’s also just the price at my Aldi in the upper mid-west, so, yours might have them for a little cheaper. Blueberries tout some serious health benefits, too. Those include being low in calories but high in nutrients, being the “king of antioxidant foods,” according to Healthline, being able to reduce DNA damage and many others. I should note, and we’ll get into it more in a minute, but these Southern Grove Dried Blueberries do look like they have a little bit of added sugar.

There’s not really any fat in these. Somehow you get .5 grams if you eat the entire bag, but in a single serving it’s less than 1% of your daily value. Hardly any sodium and quite a few carbs. Part of me is kind of scratching my head about why there’s so much added sugar in these on top of the natural sugar. I’d be interested to try a version of Southern Grove Dried Blueberries without all the extra added in there.

There aren’t too many vitamins and minerals in it, just a little calcium and potassium.

Well, the moment we’ve all been waiting for. The big reveal to finally show what’s in this mysterious product: blueberries and sugar. Yea, pretty complex. Southern Grove Dried Blueberries are one complicated fruit. I’m also just noticing that it says I need to refrigerate after opening. I definitely didn’t do that and ate these over the course of two or three days at room temperature. Yikes.

They weren’t bad, I’ll say that. They were also very blue and pretty prune-looking to be frank about it. I suppose that comes with the territory of being dried. I scooped out my first bit of them with a 1/4 measuring cup and poured them into my bowl that I’d already had cereal in earlier.

For me, the extra sugar was just a bit much. Maybe studies showed them that people didn’t like fully natural blueberries or something so that’s why Southern Grove Dried Blueberries have the extra stuff in them. They were still good, definitely more of a dessert-level sugar item though.