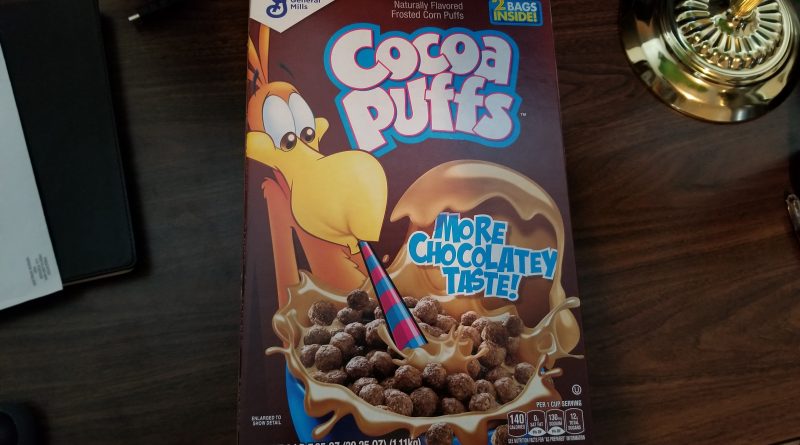 It’s definitely like the chocolate taste in chocolate milk. Back in my day, my mom didn’t really buy it that often. I mean, Cocoa Puffs is chocolate cereal.

Who could in good conscience feed their kid a cereal that’s made of chocolate? Well, the good news is that it’s actually pretty healthy. Most of these cereals are fortified with various vitamins and minerals, including Cocoa Puffs.

Now that I’m an adult, I figured I’d go all-out and buy the monster box of Cocoa Puffs at Sam’s Club. Mmmm. Monster. I should be allowed to gorge on as much chocolate cereal as I want, right? Good.

Sonny the bird has been the mascot since the beginning. In earlier commercials, he was usually accompanied by his grandpa who would use the cereal to get Sonny to do things that he wanted. Seriously, it was goofy but almost a little weird.

In the second commercial (part of this compilation below) the grandpa uses Cocoa Puffs to turn Sonny into a drill so they can dig for oil. Then, they accidentally go to China. I don’t even know anymore, man.

Eventually, gramps got phased out or old age just took its toll, because now we just deal with Sonny on the boxes. Even the double-wide Sam’s Club ones. One really nice thing about this cereal (and all chocolate cereals for that matter) is that it does make some nice chocolate milk after you’re done eating it.

Right off the bat, these Cocoa Puffs are carb-heavy (which is a good thing as far as I’m concerned). We won’t lie to you there. Yes, a lot of those carbs also come from sugar. Look, I probably say this too much, but, a little sugar here and there is not the end of the world. Far from it, in fact. I start my day with this granola, cereal, nut and protein concoction that’s loaded with sugar.

My teeth are doing just fine, thanks for asking.

This sports 140 calories (180 with 1/2 cup skim milk) and doesn’t have much else in the way of other things like fat or protein. There are however, a lot of different vitamins and minerals in Coco Puffs. Lots of iron, thiamin, folate, and vitamin B12 in there to keep you feelin’ some kinda way.

The only thing that bummed me out about the ingredients in this was that there’s no Hershey’s chocolate. In the old days, this cereal did have Hershey’s in it. Now we need to look elsewhere for that cereal, like Hershey’s Fillows if you can find it anywhere. I believe there’s also a Hershey’s Kiss cereal somewhere, too.

This has it all. Whole grain corn. Rice flour. Even some Alkali got processed in there! Then there’s all the vitamin and mineral ingredients, too. Baking soda’s good for your teeth and your stomach in these Cocoa Puffs!

Enough about those ingredients, let’s pour a bowl and see what happens.

We’ve seen a few other chocolate cereals in our time. Oreo, Krave, and Cheerios are all getting in on the chocolate game. However, Cocoa Puffs is the original. They got here first, so let’s have a bite with some almond milk and see if the taste still makes us cucoo for ’em. Since I never got my hands on the versions that had Hershey’s Chocolate in them, I didn’t go in with the highest expectations to taste that flavor.

The good news is that these are still a pretty tasty cereal. It’s true that a lot of competition exists these days, but good ol’ Cocoa Puffs still hold up. They didn’t exactly blow me away, but, they were still tasty to snack on. Together with almond milk (or any milk) they do taste good and they still make me cucoo whenever I see them.