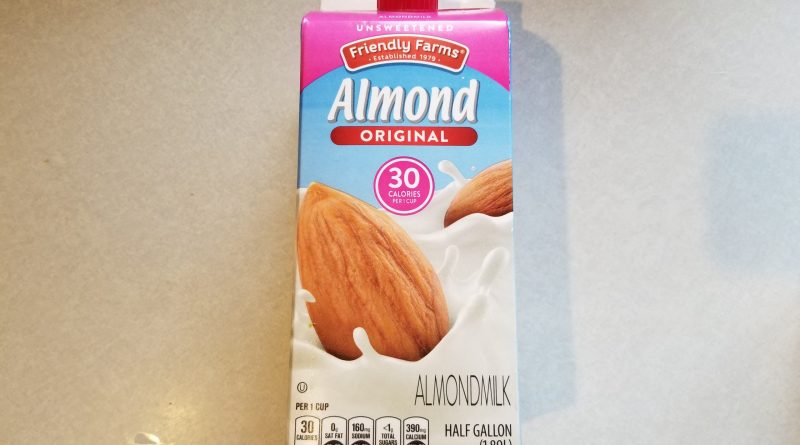 Friendly Farms Unsweetened Almond Milk is what I’ll be drinking today. I’ll be having some of it with an elevation protein powder mixed in, too. Almond milk has become a new thing for me lately.

At one point, I wasn’t drinking any milk at all when I started seeing that a lot of athletes tend to avoid dairy. Then, I discovered that almond milk was a thing and started buying kind of a lot of it.

Normally, I buy almond milk in big quantities from Sam’s Club. However, there isn’t one really close by to me and when I ran out, Aldi came in clutch.

Because I’m a boring old guy, I prefer the Friendly Farms Unsweetened Almond Milk vs the sweetened. Yes, the unsweetened on its own does taste kind of bland (we’ll get to that later) but I still like it. Especially with a flavored protein shake mixed in. Heck, even pea protein powder mixed with it is pretty good.

That’s a little bit of a stretch, I probably wouldn’t ever just drink it with pea protein powder. However, pouring that mixture into almonds and sugar cereal (like Lucky Charms) is pretty good.

Let’s get into the nutrition facts for this.

Each one of these containers of Friendly Farms Unsweetened Almond Milk yields 8 servings and each serving is 1 cup. You’ll get 30 calories out of that cup. It’s really not much considering how loaded with nutrients this is. I’m a little surprised that they don’t need to label it as a supplement or something.

There’s hardly any fat in this, which I always gotta do a double take with because almonds themselves have a lot of healthy fat (but apparently this doesn’t). There’s a little sodium in there. 1 gram of carbs but basically none.

Tiny bit of protein in the Friendly Farms Unsweetened Almond Milk, too. Getting down to the vitamins and minerals is where things get interesting.

Here’s where we learn the crazy truth about almond milk: it’s kinda not really milk. It’s water. And almonds. Yea. Either way, it definitely resembles milk taste-wise so I’m okay with it.

You’ll also be getting some tricalcium phosphate in there, some sea salt, gellan gum, sunflower lecithin, locust bean gum and other hard-to-pronounce things. Don’t forget, the Friendly Farms Unsweetened Almond Milk is not meant to be used as an infant formula.

I guess that must have been a problem if they had to put it on the packaging. Anyway, don’t forget to refrigerate it.

I’ve had this alone and tried it with all kinds of different things (like protein powders, mainly). Any way that I’ve had this, I’ve enjoyed it. I’ll admit that I’m a bit wigged out by the different gums and phosphates, but, for all I know, those additives might do some good.

Almond milk in general is my go-to thing now instead of regular 2%. It’s loaded with nutrients and it doesn’t taste bad. Once in a while I’ll think about grabbing the sweetened version, but, I always go with the Friendly Farms Unsweetened Almond Milk if given the choice.