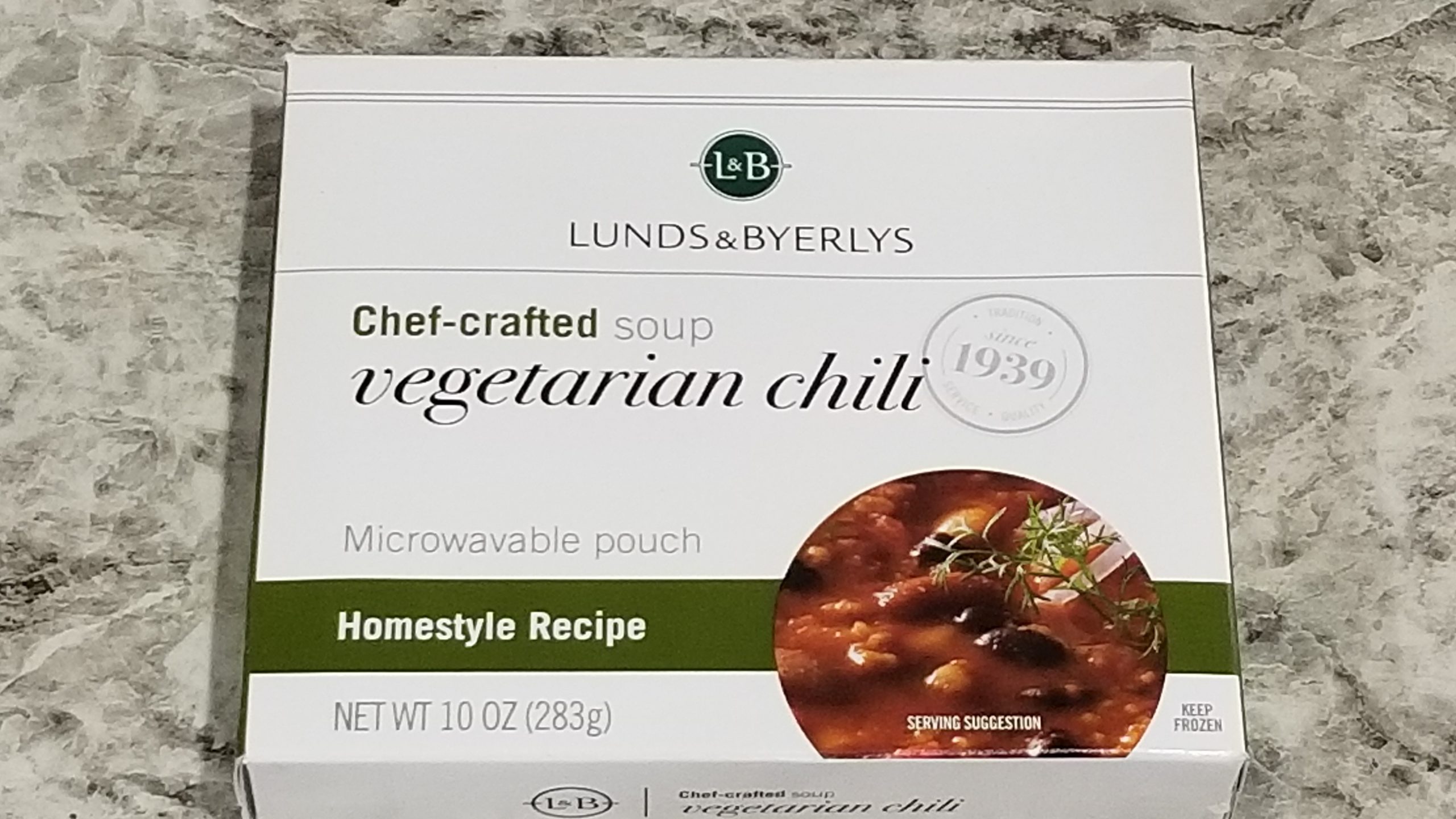 That’s right, in their various offerings of different soups, the Minneapolis grocery store chain offers vegetarian-friendly chili. Let’s find out how it stacks up with other vegetarian meals we’ve eaten.

Who knows, it might be a great addition to the frozen foods we eat.

A Quick Bit on Going Meatless

One of the reasons I tried this in the first place was because I’m trying to make an effort to go meatless once in a while. According to the Mayo Clinic’s website, there are some serious benefits to cutting out meat once a week. Substituting meat with things like beans and legumes can help reduce your risk of many different health conditions.

Just make sure you don’t compensate for the vegetarian chili day with double steak the next! Let’s take a look at the front of this box.

The Front of The Box

You will notice that most Lunds & Byerlys soup boxes look similar. The front does not look too different than any other one. The “vegetarian chili” is in italicized font and we’re reminded that this soup comes from tradition and quality since 1939. It’s also a homestyle recipe!

The picture of the soup looks pretty tasty. You’ve got some beans in there and I think I see a piece of onion, too. There’s also a nice bit of cilantro in there as a garnishment (I definitely ate all of mine though).

The soup is also 10 ounces.

You will be eating some healthy soup here. I just wish there were more calories in it. My biggest problem is trying to eat healthy but going way overboard with too many vitamins and minerals trying to get up to 2400 calories every day.

You have a lot of fiber in here, a ton of Vitamin A, Vitamin C, and even a solid amount of protein. Not too much fat, either. The only thing I don’t like is how much sodium this packs, but we can’t have everything, right?

Holy Ingredients Batman! There’s a lot of stuff for us to dig through in this vegetarian chili. It’s hard to believe that a small bag of soup for 180 calories is loaded with this many different ingredients.

On the other, if you pick one up, there are about a million different flavors in this to taste. You get onion, carrot, celery, chili powder, cumin, and a ton of other things that might make you nose run if you’re sensitive to mildly spicy food. Let’s peak at those cooking instructions.

Above the cooking instructions, we also get a reminder of the core ingredients that make up this vegetarian chili. Those jalapeno chili peppers are probably largely responsible for any spiciness you taste when eating this.

I love me some green bell pepper once in a while. Frankly, the best way to cook this is (in my opinion) in a pot of boiling water. When I made this, I did the microwave approach. The soup just gets done more evenly on the stove, but I was feeling lazy.

The microwave works well enough, but, you might end up with some soup encrusted on the upper parts of your bowl by the time it’s done cooking.

It kind of looks like that’s a soup crater in there with the ring around the bowl. That would have been avoided if I went with the pot + boiling water.

As I mentioned earlier, going meatless at least one day a week can be good for your health. If you do choose to go in that direction, I highly recommend adding this soup into your menu. It can be great for lunch, dinner, or even a Midnight Snack.

I’m not exactly sure which bean was responsible for this, but the soup almost tasted like it had meat in it. If someone had told me that it had a small amount of ground beef in there, I would have believed it. That makes this soup especially good if you don’t think you could part with meat for one day. You can at least fool yourself with something that tastes kind of meaty.

I enjoyed the spiciness, although, I get that might not be for everybody. The onions were also pretty tasty. This would be a Shrek-approved soup.

Recommend the vegetarian chili from Lunds and Byerlys? Yes