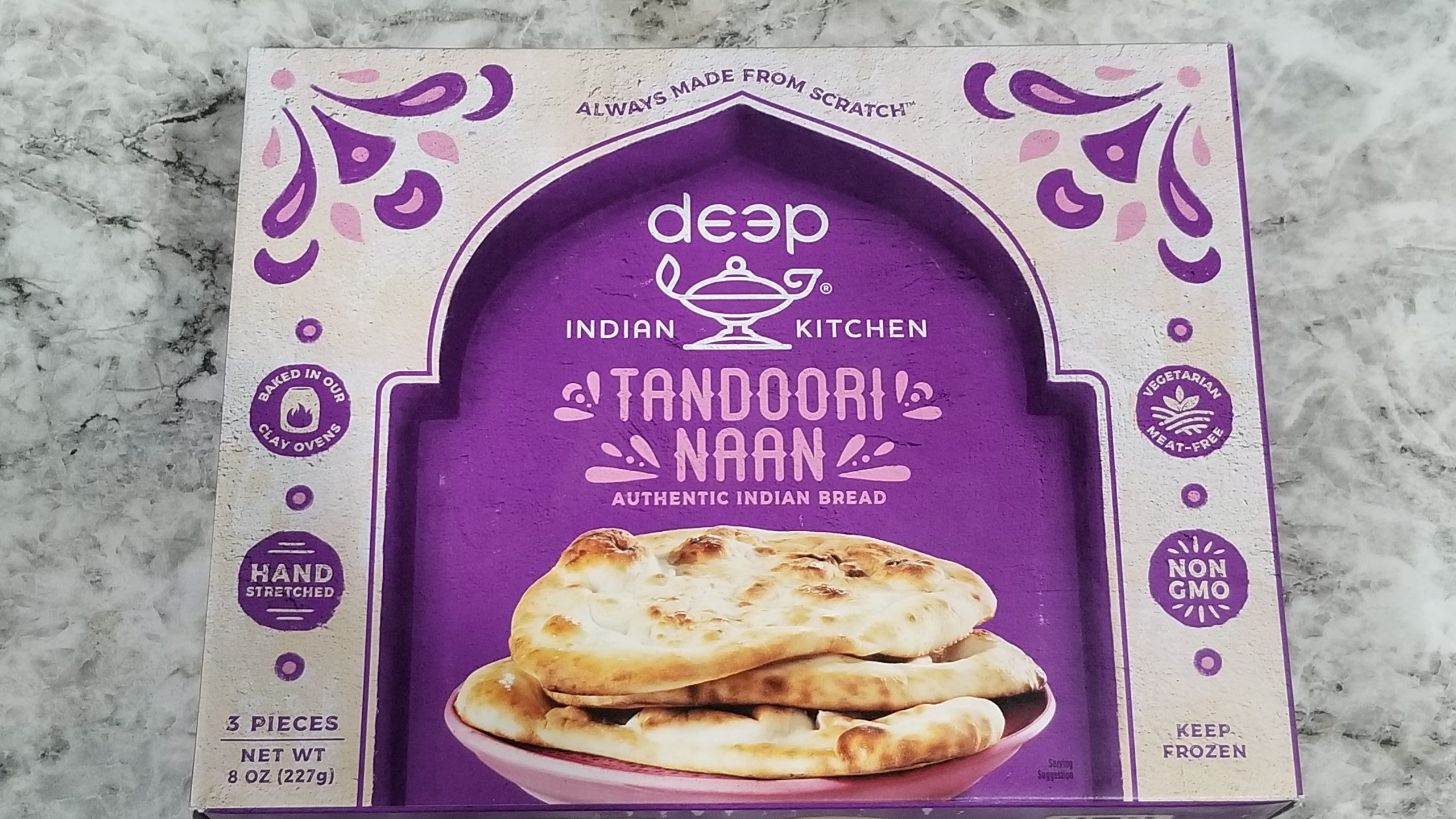 If there’s one thing that knocks me out when I wake up during the night, it’s eating straight carbs. Tandoori Naan is basically all carbs except for a small amount of fat and sugar.

Usually, I throw some oatmeal in the microwave to really go to sleep if I need to, but this might become my backup midnight snack.

Deep Indian kitchen is a family run business. According to the story on their website and packaging, the company has been around for a while. They make this Tandoori Naan from scratch, too. The dough is hand-stretched and cooked in a clay tandoor oven. I was pretty good at making clay stuff back in the day.

The front of the packaging has a handful of messages about their process and the Tandoori Naan. The naan in the front picture actually looks much smaller than what’s actually in the package. That’s a big plus, since breakfast cereal has been enlarged on the cover of its packaging for generations to show the texture. That and get our hopes up about the cereal being huge. How awesome would that be?

The front also reminds us that the dough is hand-stretched, made in Deep Indian Kitchen’s clay ovens, meat-free and non-GMO. Possibly the most important message, though, is about the hand-stretched part.

The back of the box shows us what the simple ingredients in this tandoori naan bread are: wheat and salt. The company also includes an explanation about their brand. In India, according to the package, “deep” means lamp. They also mention that every purchase benefits their Deepkiran (“Ray of Light”) Foundation. This ultimately allows them to support 22,000+ children each year.

Welcoming you to India, the box also explains that naan is India’s most popular food (not tandoori naan?). It’s eaten with every meal. I can confirm, that while eating a lot of westernized Indian food while I was studying abroad in England, there was always a lot of tandoori naan present. That and papadums.

So, yea. Carbs. Pretty simple and straightforward nutrition facts for you on the tandoori naan here. If you decide to eat all three pieces like I did, that runs you 690 calories. There’s a surprising amount of protein in here for bread, 21 grams if you eat everything. Otherwise, it’s not too steep with anything else, which is good to see. Drink plenty of water when you eat it.

According to the ingredients, this has a little more than just wheat and salt baked into it. We got some palm oil, sesame oil, sugar, sunflower oil, all the oil! Not really. But it does have varying oils. The yeast was expected, I mean it is tandoori naan after all.

I did have an oven to preheat but no butter for my Naan, oh well. After preheating the oven to 400 F, I placed the tandoori naan on a parchment paper-lined baking sheet and put it in there for the two minutes and thirty seconds.

The naan didn’t quite get done in that amount of time, so I was a little bummed by that. After putting it in for about another 2 minutes, it came out hot and ready to eat.

Here we stand, with a plate full of tandoori naan bread. What else can you say? It was pretty indistinguishable from other naan that I’ve had in some solid restaurants. This was more like bread-only and didn’t have anything like cinnamon or pre-spread butter (although it was recommended). As I said at the beginning, having something like this in your freezer is great if you wake up in the middle of the night craving a snack to put you back into dream land.

The bread was both dense but at the same time light and airy. Taste-wise, it was fine. I didn’t have some machine-made tandoori naan to compare it to. If I did, my guess is that this would have come out on top by comparison. Next time I get this, I’ll be putting it in the microwave to save some parchment paper. Cooking it in the oven didn’t really feel necessary. It’s also nice that this comes from a family-run company.