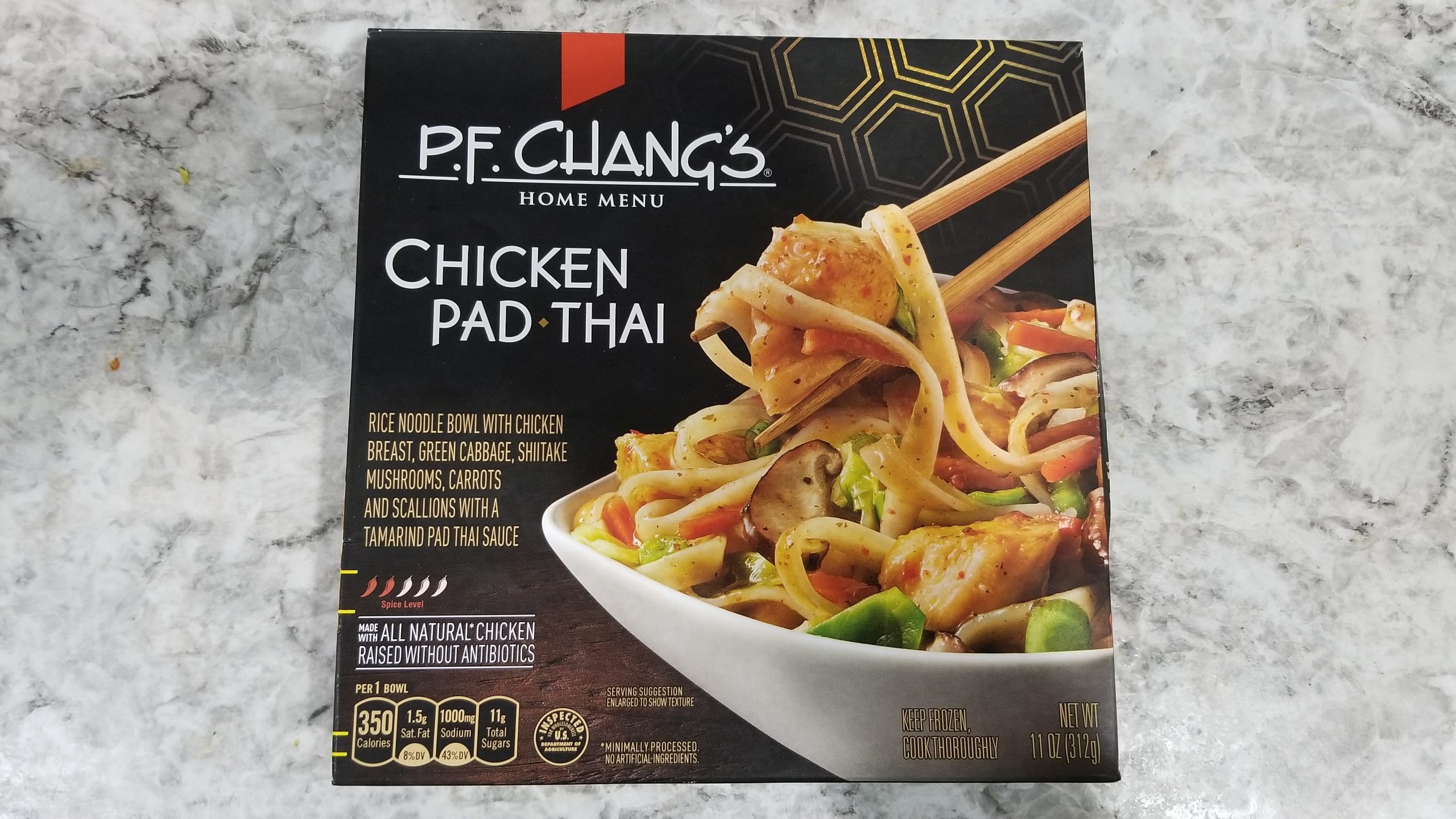 P.F. Chang’s Chicken Pad Thai, it’s one of the many frozen meals from the chain of restaurants throughout the United States. They also sell frozen boxes of some of their meals for people to enjoy at home if a restaurant isn’t close by.

I was wandering through Target and noticed this one in the freezer section the other day, so I figured it was about time I reviewed a little more frozen food for some Midnight Snackin‘.

A Little On The Company

The restaurant chain was started back in 1993 by Paul Fleming and Philip Chiang in Scottsdale, AZ. I’m guessing Philip’s middle name is Frank or something. The chain wouldn’t quite have the same ring to it if it was P.F. Fleming’s. Wouldn’t be crazy about buying food from a place that sounds like phlegm. That or the “F” is for Fleming’s name.

The restaurant chain really started in the 60’s with Chiang’s mom, Cecilia. She had a restaurant called the The Mandarin that was super good and eventually that lead to Paul and Philip doing the P.F. Chang chain a few years later.

It would be a few year’s before getting to P.F. Chang’s Chicken Pad Thai in the freezer section. Enough about business, let’s get to the food!

The packaging looks nice. It reminds me of one of their restaurants that I’ve never been in before. I mean, it reminds me of what I assume their restaurants probably look like on the inside. Yea. The food also looks tasty. You figure that all frozen food pictures look good, but this actually looks delicious. The P.F. Chang’s Chicken Pad Thai had a good photographer.

This is pretty solid in terms of protein, carbs, and fat. It doesn’t mention what kind of fat makes up the other 10.5 grams outside of the 1.5 saturated fat and the 0 grams of trans fat, but it could be the good kind?

The important thing is that you know there’s only a little bit of the bad fats in this P.F. Chang’s Chicken Pad Thai. Based on how great I felt after eating this, my gut tells me the other fats in this were monosaturated and/or polyunsaturated.

To kick things off, holy vegetables. I should also mention right off the bat that those Shiitake mushrooms were awesome. You figure that anything frozen might not carry the same quality as fresh food, which is fair.

While I didn’t have a direct comparison, these were really good. I didn’t notice the cabbage as much and the carrots were tasty. The anchovy, olive oil, and fish sauce probably explain the healthy fat content in this P.F. Chang’s Chicken Pad Thai meal.

Back of The Box

“Stay in. Eat like you didn’t.” That’s a good way to put it, Philip. It’s neat to see the various ingredients on the back of the box there. Those ingredients in it were pretty tasty. The label is also smart.

The cooking instructions were pretty straightforward. Even better, they were simpler than most frozen food directions since you don’t need to cut any holes to vent it. Just throw’er into your microwave on high and go nuts.

I opted to cook it at 4:45 and that worked out pretty well. I did, however, forget to stick my meat thermometer into it to check for the temperature. I’m writing this 24 hours later and still alive, so I’m guessing it was fully cooked.

Little foggy in there!

A lot goin’ on there. The white things are the scallions (I think) and tasted pretty good. If you squint really hard, you can see some chicken in there. Kidding, there’s actually a decent amount of chicken but it’s tough to see amongst the vegetables.

Overall, this is a tasty frozen meal. What they say on the box is probably kinda true about it tasting similar to what you get in their restaurants. I’m sure that their restaurants are better when the food’s prepared right there, but this P.F. Chang’s Chicken Pad Thai does taste good.

The frozen vegetables and chicken are great and the noodles have that awesome pad-thai-noodly taste that I think is pretty addicting. There’s a little more sodium than I’m cool with, but hey – all frozen food’s high in sodium. Or at least a lot of it is.

The front of the box says that it’s not too spicy on their spice-o-meter images of those jalapenos. The amount of them colored red indicates their spiciness, with only 2 out of 5 being red. I disagree with that, since I thought it was pretty dang spicy.

Still really tasty, but for people with sensitive palates, you should know P.F. Chang’s Chicken Pad Thai underestimates that a bit. I think in terms of authentic Thai standards it’s probably accurate, since everyone I know who’s originally from Thailand can attest that they can handle waaaaaay spicier food there than folks with North American taste palates.