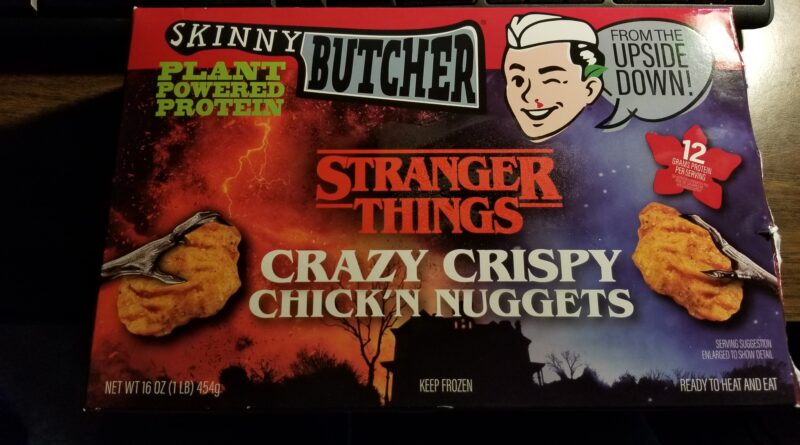 Stranger Things Chicken Nuggets hit the scene a few days ago, officially called Stranger Things CRAZY CRISPY CHICK’N NUGGETS. Even though it probably feels like I just yelled at you with the way that was typed, it somehow isn’t like that on the packaging.

Anyways, to make this even crazier, these are made from plant-based protein. I’ve had other plant-based meats before with mixed feelings.

About three years ago, I tried the White Castle Impossible slider. It tasted a little weird, to be honest.

The company that made these is called Skinny Butcher. I’ll be honest, I really like that name. Has a nice ring to it. I also really like that the picture of the guy on the front of the box has a little nosebleed thing going on. Looks like he just did some crazy Eleven-style stuff.

Let’s start out by looking at the nutrition facts for these Stranger Things Chicken Nuggets. Looks like each serving will pack 320 calories for you. That should be pretty good in terms of overall energy. One serving is 5 pieces.

You will also get a little protein, 12% of your daily value. Very good to see. Some iron as well.

These ingredients consist of a handful of common things.

So, I’ll get right to the point. I didn’t really like these. I think it’s safe to say that most movie or TV show themed foods are suspect at best. Unfortunately, these tasted like mushy shrimp (like it’s not bad enough to give you food poisoning, but it’s not great).

I hope that someday the fake meat gets perfected to the point where we can’t tell the difference, but that time has not arrived. If these were loaded with different spices that might have made a difference, but I’m not sure. Nutritionally, they really aren’t bad, so that’s a redeeming quality.