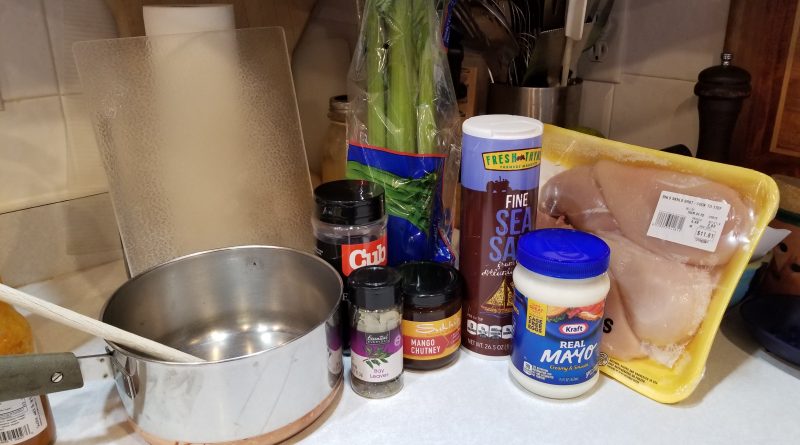 Chicken salad recipes are good year-round. The boiling part might not be your thing in the summer, but it won’t heat up the kitchen too much. You’ll mostly be simmering the ingredients, anyway. It’s great if you want a meal with lots of protein and b vitamins that’s also a little lighter.

Let’s take a look at what you’ll need to make this.

Click here for the notecard version of the recipe

Let’s get into this chicken salad recipe with the first step of finding a big pot. You’ll need that to boil a lot of the ingredients together. Ideally, it’ll have a lid, too.

Next, grab your chicken

Once you have your chicken, wash it under cold water.

Pat each breast dry with a paper towel.

Once you’ve done that with each breast, throw it into the pot. Speaking of that, make sure you grab a Pyrex measuring cup and fill the pot up with about 1.5 quarts of water.

Dump one quart into the big pot and then get another half quart in there.

Pour that one into the pot, too. This is about what it should look like when all the chicken breasts have been washed and put into the pot:

Next, grab your celery for this chicken salad recipe

You’ll be chopping it and then washing for this chicken salad recipe.

Grab a cutting board and a kitchen knife for this part. First, cut the base of the celery off.

Then, go for the top leafy parts for this chicken salad recipe.

After that, wash the stalks before cutting them up any more.

Probably wouldn’t hurt to wash the cutting board, too. This part might not be all that necessary, but the celery that I used looked kind of dirty.

Next, chop up the celery into little pieces on the cutting board.

They need to be really finely chopped up, but nice little chunks will work because there are just being used for the broth.

Next, get your bay leaves for the chicken salad recipe.

Grab a few of them. You’ll need between 2-4 for this. For whatever reason, the ones I got where in a container with a lid like this one:

That didn’t really make any sense but whatever, I’ll allow it. Throw those bay leaves into the pot.

After the bay leaves, get your 1/4 cup measuring cup out.

Peppercorn time. Grab your peppercorn container. I bout some at Cub, they really let you know it’s their brand, too.

Measure out 1/4 cup of that since you’ll need it for the broth.

Dump the quarter cup of peppercorns into the big pot.

Next, get your 1 teaspoon measuring spoon.

Then, get your salt and measure out one teaspoon of that.

Dump that in there.

Turn up your heat to get the water boiling for this chicken salad recipe.

Mixing everything around is probably optional at this point in the chicken salad recipe, but it also can’t hurt.

Throw a lid on to speed up the boiling process. Once it’s boiling, take the top off and stir it around a little more.

Turn the heat on the stove down to low so it simmers since we’ll be cooking this pretty slowly. Other chicken salad recipes might skip this part, but it really adds to the flavor. Once the heat’s down, cover the pot again.

Set a timer for one hour to let it simmer.

During that time, you can periodically stir the mixture for the chicken salad recipe. Feels more like chicken soup at this point.

Once it’s done, the pot should look something like the image above. Make sure that your chicken breasts are at least 160 degrees F.

I probably didn’t need to cook mine that long since they were kind of overdone at 200 degrees F. Either way, put your chicken on the cutting board.

Try your best to chop it up into cubes for this chicken salad recipe.

As you can see, I did a terrible job cutting mine up and it ended up being all shredded. After that, throw the chicken into a medium-large mixing bowl.

After that, get your Mayo. Just a side note, if you bought yours on a shelf and it wasn’t being refrigerated – that’s fine. After you open it, though, put any that you don’t use with this recipe back in the fridge right away.

Grab the one cup measuring cup.

Measure out one cup of Mayo. Then, dump that into the mix with the chicken.

It probably wouldn’t hurt to mix that around for this chicken salad recipe before putting anything else in there. Then, grab your mango chutney.

If you have a little container like the one that I got, just pour all of it into the mixing bowl. If you have a lot of it, measuring out about one cup of it. Dump that in with the chicken salad recipe mixture.

Mix that around really well with a spoon.

Looks pretty mushy. Once that’s mixed really well together, get the rest of your celery. Unless you have a ton of that left, then just grab a few ribs.

Wash it and chop that up just like you did before. Once that’s done, toss it into the mixing bowl and stir everything together. You may want to dry it with a paper towel, too.

That’s pretty much it! You can also chop the celery to be finer and consider adding other things like cranberries to this. Serve it on various breads like buns or in rolls.