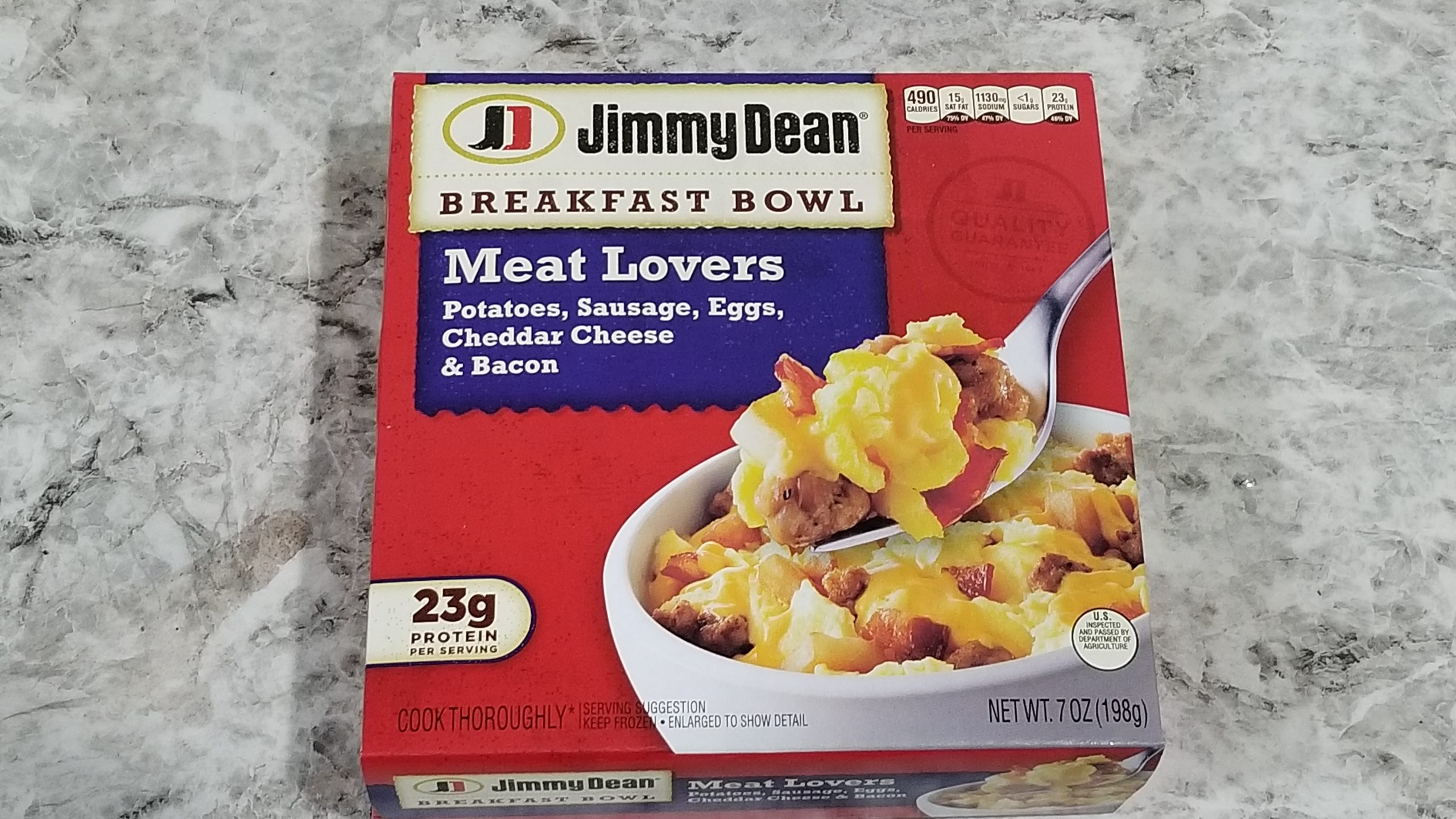 Jimmy Dean Meat Lovers Bowl is on the table tonight.

It was supposed to be another thing from Kodiak Cakes but there was a pretty big snowstorm. Considering I barely made it to the gym that’s five minutes from my house, I wasn’t looking to die by trying to go to Target after if I didn’t need to.

I picked up four or five different Jimmy Dean breakfast bowls last weekend when they were on sale for $2.50 a pop at Cub. The Kodiak Cakes we reviewed yesterday were kind of a last-minute thing because I needed to eat more sugar but wanted something balanced late at night.

That’s not a joke, I actually haven’t been eating enough sugar and it’s been messing with my sleep in a bad way. Anyways, here’s the Jimmy Dean Meat Lovers Breakfast Bowl review.

Jimmy Dean was started by none other than a guy named Jimmy Dean. If you aren’t familiar with him, he was a country singer back in the day. He had made sausage a lot with his grandpa when he was growing up on a farm in Texas. One day he bit into a particularly fatty sausage in a diner and that was what got him thinking about doing his own thing.

Since the late ‘60s, millions of people have eaten Jimmy’s sausage and many more will for the foreseeable future. Yum.

That’s him if you’re wondering.

The front of this Jimmy Dean Meat Lovers bowl has everything you’d want in a Jimmy Dean meal. The stamp of approval, the logo that I’m just realizing now is a pair of boots, and the core ingredients listed on there.

Let’s not forget the possibly-enlarged forkful of food from the bowl itself. Along with that, we’re shown that it has potatoes, sausage, eggs, cheddar cheese & bacon in it.

I like all those things. Especially the 23 grams of protein.

This thing is loaded with a lot of stuff, including some things that are good and bad. Let’s tackle the bad and end on a high note. First off, 490 calories. That in itself isn’t terrible. You do want a big breakfast in the morning or something like this after drinking a lot at night.

You also see 70% of your daily cholesterol, which might be seen as a bit much for some people.

Half your daily sodium’s in the Jimmy Dean Meat Lovers bowl, too.

On the bright side, there isn’t much sugar or carbs if you’re trying to avoid those. Then of course the protein is pretty big in this at 23 grams or 43% of your daily value.

We saw the main ingredients on the front of the package, but that was just the tip of the preservative. The potatoes in this have maltodextrin, tetrasodium pyrophosphate and disodium dihydrogen pyrophosphate. I hope I don’t die-hydrogen after eating this.

The scrambled eggs have the usual and respectable ingredients you would expect. Although, there’s artificial butter flavor in there.

The cooking instructions for this require that you puncture the film on the bowl before putting it into the microwave for the first round of cooking. Then, you just need to remove the film and stir it up a little. Replace the film and cook for another minute with a minute of rest after and you’re good to go.

The potatoes were white and tasted okay but not great. I’m not sure if their consistency was tough because of all the ingredients that were hard to pronounce, but they weren’t anything to write home about.

The sausage was pretty greasy. The bacon probably played a role in that, too. When I say greasy, this was greeeeeeeeasy.

The cheddar cheese was awesome and they eggs were pretty average scrambled frozen eggs.

All the saturated fat really messed with my ability to sleep last night. When I say messed with it, we’re talking walking up at 3 am and laying there till the alarm went off at 6. It was also pretty hard to go to sleep in the first place.

That may have been my own fault because I always throw some coconut in my oatmeal in the morning (lots of saturated fat in there) so I was already at 80 or 90% of my daily value.

The Jimmy Dean Meat Lovers Bowl wasn’t the best Jimmy Dean product we’ve reviewed here. I know there’s better ones out there and I don’t doubt that one of the other four in my freezer will clock in at a higher rating soon.