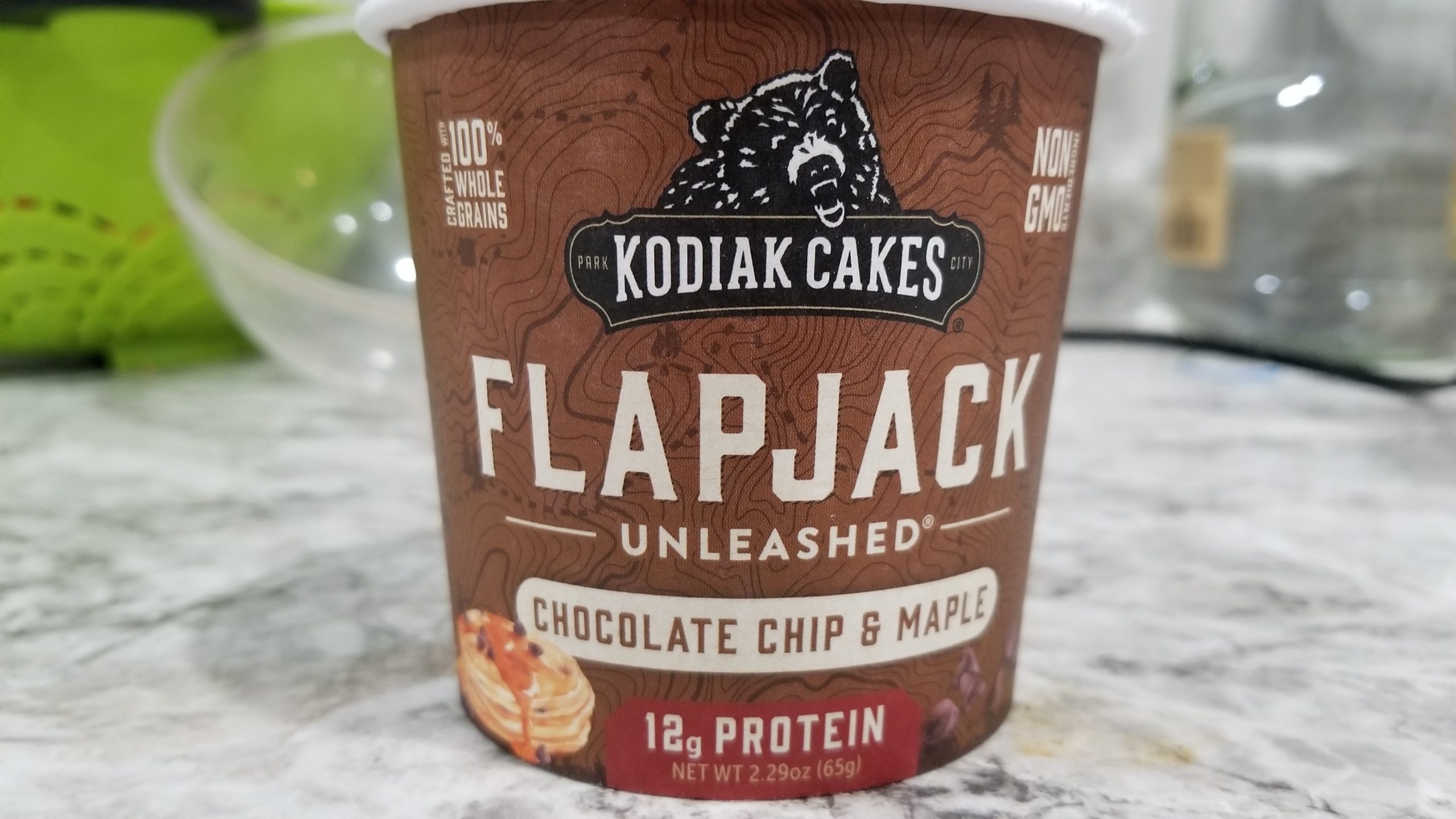 Chocolate Chip & Maple Flapjack Unleashed are on the table for review tonight.

These originally got on my radar because one of my roommates is always eating them and they smell pretty darn good. Since I like reviewing stuff, I figured why not?

The ones he’s usually eating at his computer in the morning kind of smell like brownies when I walk past. Along with that, he’s usually making the same noises as Bill Murray in “What About Bob” during the dinner part.

To be a little more specific, he’s making those “I’ll have what she’s having” type noises.

A Little Bit on The Company

The name of the company is Kodiak Cakes. They actually make a ton of other things besides these cups. Depending on how these things taste, we might need to dive into more of their products.

This is another one of those companies where I really like the story. They technically started up in the early 80’s with an 8-year-old named Joel going door-to-door around town selling his grandpa’s heirloom pancake mix.

Things got a little more organized in the ‘90s when Joel starting working on a “just add water” pancake mix and operating a business with the idea. It was slow growing at first, but, their brand has now grown into a sizable operation.

The front of the chocolate chip & maple Kodiak power cup shows their logo with what I believe is a Kodiak bear roaring. Careful going near that thing’s cubs. It mentions on either side of the bear that this is non-GMO and also 100% whole grain.

Lower on the cup we see a stack of pancakes with syrup and blueberries on them. Off to the other side there’s some chocolate chips. Front and center at the base of it, we see those oh-so-tasty 12 grams of protein.

The nutrition label on this shows 270 calories in your pancake cup. In addition to that, there’s 15% of your daily calcium, a decent amount of dietary fiber, and of course 12 grams of protein.

There is a little more saturated fat than I was expecting, but these are also pancakes in a cup we’re talking about here. Also, there’s 16 grams of sugar in there. That was actually part of the reason why I bought this.

Of all things, I wasn’t getting enough sugar in my diet with the weight lifting that I do. Even though I could have gone and bought a Gatorade, I went instead to Target after my workout last night and picked up one of these.

I figured that if the ones that my buddy’s always eating smelled like brownies, they probably had some sugar in them. At the same time, I assumed that if they were pancakes (or pancake-y) then they would have a good balance of carbs.

My gut instincts there did not lead me astray.

This does contain milk and wheat plus trace amounts of egg, peanuts, soy and tree nuts. If you’re not allowed to eat any of the fun things like that, then shoot.

The cooking instructions for the Chocolate Chip & Maple Flapjack Unleashed are pretty straightforward. It instructs you to take off the lid, thoroughly mix ¼ cup of water in there, and microwave on high for 60 seconds in a 1100-watt microwave.

That was all I needed and it came out hot and ready to eat!

I really picked one of these up because I was having trouble sleeping. I needed something with the right amount of sugar, carbs and ideally some protein to put me out for the night. This worked. Not only did it work, but it introduced me to a new type of pancake.

These are definitely an investment, they run $1.99 a piece at Target stores. That being said, there are a lot of wholesome ingredients.

I’m not sure how long the pancake-in-a-cup concept has been around, but, it’s genius. Now, I’m not saying that I don’t like my classic steel-cut oats in the morning, but this is something that I wish was on my radar sooner.

After cooking it in the microwave and letting it rest a minute, the Chocolate Chip & Maple Flapjack Unleashed was still pretty hot. After letting it cool a bit more, I dug in and took the first bite. It was pretty light and airy.

Fluffier than a pancake but similar in taste. The chocolate was good but not overbearing, as was the maple taste.