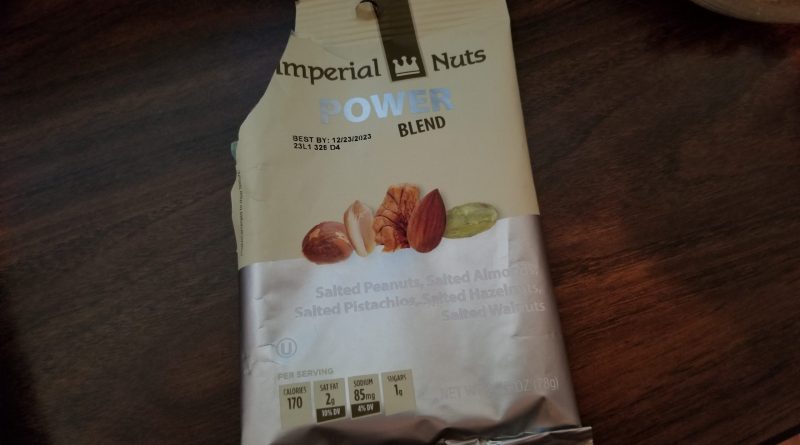 Imperial Nuts are said to be a blend of the best. Wait, no, it definitely doesn’t say that on the packaging. The important thing is that it is a blend of nuts, from what I can see.

In fact, there’s a lot of different kinds in the Imperial Nuts Power Blend from the looks of it. As the package says, there’s Salted Peanuts, Salted Almonds, Salted Pistachios, Salted Hazelnuts, and Salted Walnuts in there. Yea.

It looks like these Imperial Nuts should be pretty good. They have a shelf life that goes until 12/23/2023, which is good to see. Sometimes the stuff that I find at the Dollar Tree is pretty close to its expiration date, but not these.

There’s 3 servings per bag of these Imperial Nuts and each serving size is one ounce. That’s 28 grams/about 1/4 cup). I’ll just cover the per-container facts for these. For each bag, there’s 470 calories and 54% of your daily amount of fat, or 42 grams.

Saturated fat is 6 grams in this – that’s 28% of your daily value. There is no trans-fat in these. Lots of healthy fat in nuts and a great way to get those in for the day quickly.

You will get a ton of fiber in the full bag of these Imperial Nuts – 24% of your daily value. That looks pretty good to me. Fiber is super important, and these are an awesome source.

You will also get a lot of protein in these nuts – 18 grams. That’s a lot. The iron is also pretty substantial, potassium is there but not too significantly.

Basically, these Imperial Nuts are mostly made up of, well, nuts! The oil has some sub-ingredients, but that’s about it. Also, some salt in there, too.

The product is from USA, Argentina, Mexico, and Turkey. It’s a pretty diverse bag of nuts.

These were actually mostly peanuts and I was kind of disappointed. The overall distribution in this bag was actually probably 85-90% peanuts and the other ones mentioned on the bag made up that last 10% or so.

It’s not that I don’t like peanuts, but I feel like the picture on the front of the bag implied that I’d be getting walnuts, almonds, and other things like pistachios. When it came to the taste, the peanuts were fine.

Anyways, that’s all I’ve got for this one. They were tasty, but I was pretty disappointed that it didn’t have more of the other nuts. These are definitely worth picking up since they are only $1.25. There’s also multiple servings per bag, so on a per-serving basis, these really are affordable.

Unless you’re comparing these Imperial Nuts to a giant bag of Member’s Mark nuts from Sam’s Club, then it probably doesn’t seem as good of a deal.