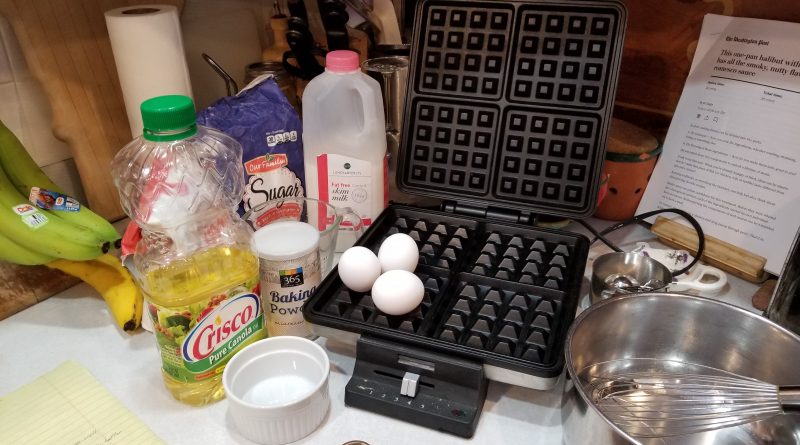 Waffle Recipes are pretty straightforward and can be done fast. We’re talking 15 minutes here and you’ll have some tasty waffles to put syrup on and all that good stuff. They go great as a main breakfast item or as a side. There are plenty of awesome toppings that work well for these, too. Those include things like chocolate chips, fruit, or whipped cream. Nutella on waffles is also incredible.

Here’s what you’ll need to make it:

Step 1 of this Waffle Recipe

Grab your milk. The one that I have pictured actually spoiled and so I ended up putting almond milk in these. Maybe it wasn’t completely spoiled but it seemed like it was, so I didn’t want to take any chances.

Next, get a measuring cup.

Fill the measuring cup with 1 cup of milk.

Pour that into the big mixing bowl.

Pour another half cup of milk into the bowl with the first one. Then, grab your medium bowl and little bowls.

Then, grab the eggs for this waffle recipe.

What you’ll be doing here is cracking the eggs and pouring the whites into the medium mixing bowl. Then, dump the yolks into the milk in the big bowl. Set the shells in the little bowl or just discard those directly into the trash.

That’s what your whites should look like in the medium bowl above. Set those aside for later and grab your flour.

Measure out 1 and 3/4 cups of flour and dump that into the liquid mixture in the big bowl.

Having a little more or a little less is fine, but I grabbed a butter knife to smooth things out on top.

Dump that in there, then mix it around for this waffle recipe.

Mixing the flour one part at a time may make it easier than throwing everything in there at once.

Dump that last part in there. It may get pretty dense here, but do your best to really mix it around.

Next, get your baking powder. This doesn’t require a ton of it, but you’ll definitely need some.

Get your measuring spoons.

Measure out two teaspoons and dump them into the wet mix. Then, grab your sugar.

Get those measuring spoons again.

Throw 1 tablespoon of sugar into the wet mix.

Mix it around really well so there aren’t any clumps. One more thing to add to your waffle recipe – the salt. Get that quick.

Measure out a half teaspoon of salt.

Mix it around after you throw that in there, too.

After that, go and find your vegetable oil.

Also, grab your Pyrex measuring cup again. It doesn’t need to be washed out or anything since the vegetable oil is going into the milk anyhow.

Pour 1/4 of the vegetable oil in there.

Careful not to splash any out of the bowl while you’re mixing it in. After mixing that around really well, wash your whisk off and grab the medium sized bowl with the egg whites in it.

Beat those really well. Once done with that, layer them into the batter for the waffle. This should make them fluffy.

Then, mix everything around some more. Also, plug in your waffle iron so it starts heating up.

Using a 1 cup measuring cup, dump a scoop of batter on to the iron.

Close the iron until it indicates that the waffle is finished cooking.

After that, your waffle recipe is done, and you’ll have some nice hot waffles.

Here’s the source recipe that I used from Wikipedia and the notecard version of this:

Notecard version of the waffle recipe