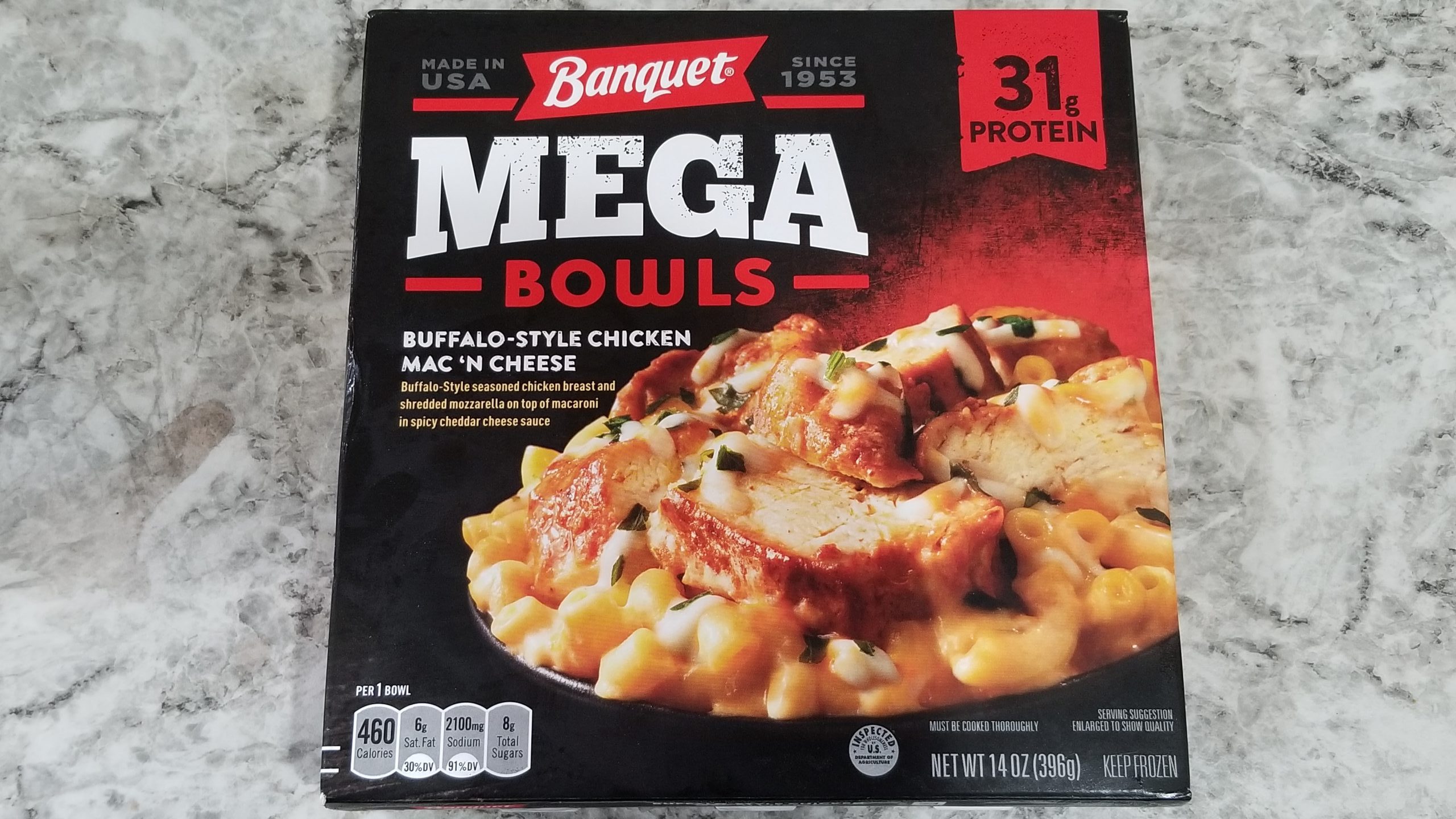 Buffalo Chicken Mac & Cheese from Banquet is on the table tonight.

Lately, we have been on a tear of reviewing different mac & cheese from a handful of companies. Some of them have tasted awesome and some not incredible.

It’s hard to mess up mac & cheese, I mean think about it. All you need is some cheese and macaroni and you’re pretty much set. Yea, I know there’s more to it than that, but I like to pretend it’s that easy.

I’ve made some buffalo chicken cheese dip before, so I was excited to see if this would be similar to that at all in spiciness or taste. The recipe I made used canned chicken, so I figured this may be somewhat similar coming out of the freezer aisle.

Let’s have a banquet! Seriously, that’s the name of this historical American food company. Banquet’s frozen meals started being sold in the mid-1950’s. In an odd turn of events that we would probably never see today, RCA bought Banquet to try and sell more TV’s. Yes, you heard that right. Banquet – the food company, was purchased by RCA – the electronics company.

It wasn’t until 2017 that they released foods like the Buffalo Chicken Mac & Cheese when their Mega Bowl line was started. Their website touts that these have significantly more protein.

The Front of the Box

The front of the box for this does look incredibly appetizing. In very large font we get to see “MEGA” underneath “Banquet” and above “Bowls.” In the top right corner, 31 grams of protein is proudly stamped there. The picture of this thing is what really gets your attention, though. The buffalo chicken mac ‘n cheese looks like it’s coming out of the kitchen at a gourmet restaurant.

That chicken skin doe. Looks crispy on the outside, moist and juicy on the inside. Their marketing team knows what they’re doing.

I was genuinely pretty excited to be trying this. The only thing that made me a little nervous was seeing these nutrition facts. The amount of protein is definitely great, but you end up eating 91% of your daily recommended amount of sodium with this thing. That’s 2100 milligrams. At 460 calories, it’s pretty likely you will end up going over your daily limit if you eat this.

There is not as much fat as I might have thought (based on the amount of cheese in that picture) so that’s a relief. In fact, it’s only 30% of your daily saturated fat, or 6 grams. Not bad.

Same with the cholesterol, it surprised me in a good way that this was as low as it was at 22% of your daily value.

The ingredients are a toss up of good and not so great things in this buffalo chicken mac & cheese. The actual macaroni and cheese itself is pretty decent, made with standard durum wheat semolina. That niacin is a B vitamin and the ferrous sulfate is an essential body mineral, a type of iron.

In the chicken breast, there’s good stuff like olive oil and dried Franks Red Hot Buffalo Wings sauce. That was an interesting surprise to see.

These, like other cooking instructions for different bowls we’ve tried lately, are straightforward to start out. They just require popping it into the microwave for four minutes. After that, taking the film off and stirring.

Then, sticking it back in the microwave for 2-3 minutes gets this thing hot and ready to eat.

They also encourage you to stick a meat thermometer in this to make sure it’s actually done at 165 degrees. I definitely forgot to do that.

This thing is dense. If someone broke into my house at night, I’d ward them off by throwing the buffalo chicken mac ‘n cheese at them. Weighing in at 14 oz’s, this is a big meal. It makes sense, since this is a Banquet MEGA BOWL!!!!

After eating a few healthier options out there, I figured it was time to treat ma’self to this bad boy. I was a little disappointed with the presentation. On the box it looks incredible, but in the bowl it’s more like mac & cheese soup. That didn’t negatively impact the taste too much, though.

The noodles were larger, that was a changeup from the Fit Kitchen noodles or Amy’s rice noodles.

Make sure you drink a lot of water with this. The sodium felt a little bit excessive. Who am I kidding? There was way too much sodium in this.

I was also thinking there would be more chicken in it. That and the chicken that was in it did not have the tasty looking skin that the chicken on the box had, bummer.

This buffalo chicken mac & cheese is definitely comfort food, no question about it. It does still have a ton of the protein in there, which is a big plus. You may want to go with something like Amy’s or Evol instead, but this was still tasty. The spicy cheddar cheese sauce was also good.