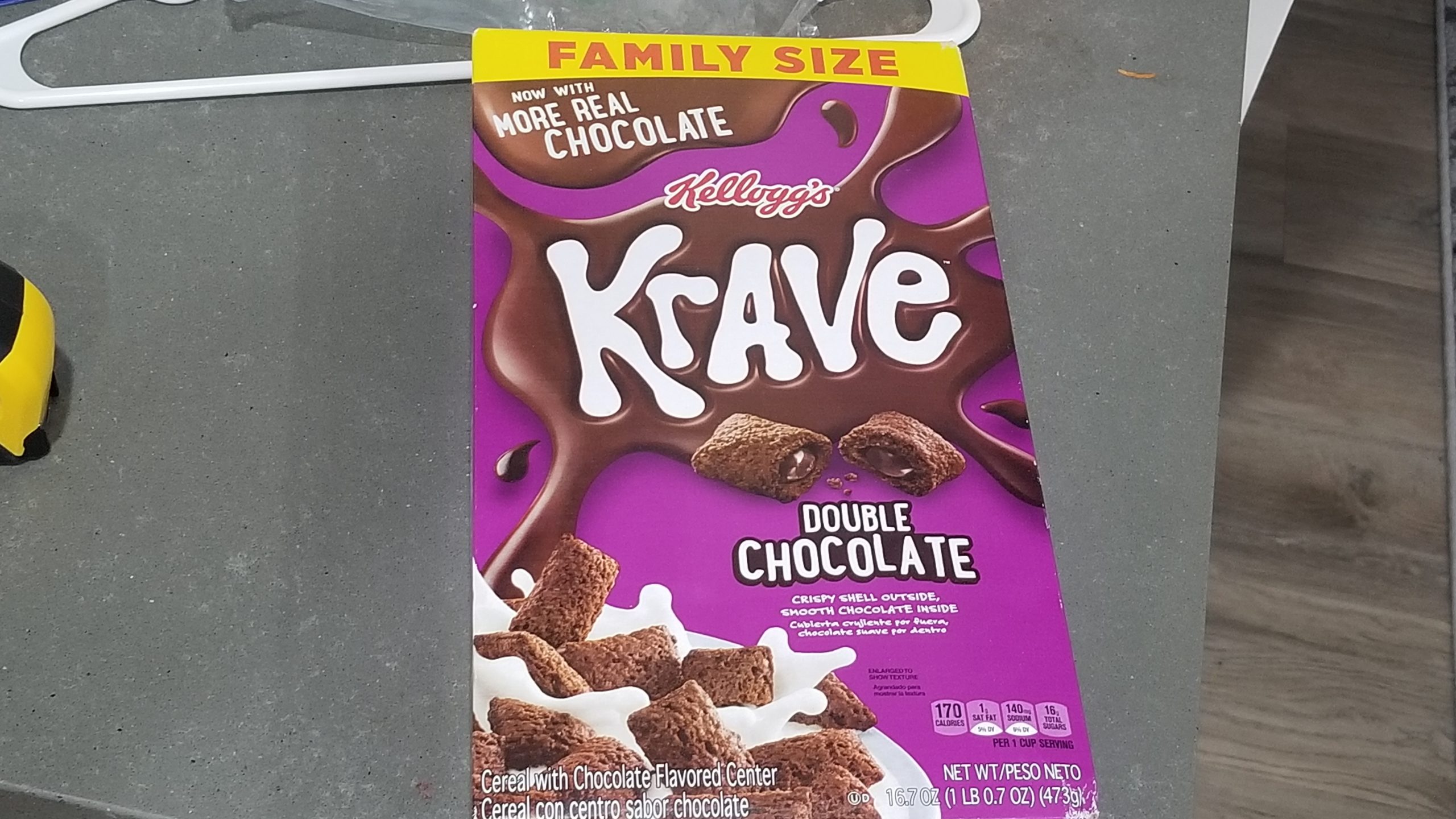 Krave Double Chocolate Cereal is on the table tonight. We’re taking a look at this one after going through some other cereals in the past that have been similar, like Hershey’s Fillows.

These Fillows looked pretty similar and had a filling in them that was something like that of cookies & cream Pop-Tarts. These promise chocolate on the outside AND chocolate on the inside, how bout that?

This is also going to be a family size review, so we’ll find out if this one’s really fun for the whole family. It also claims to have even more real chocolate, we’ll find out soon enough.

The company behind Krave double chocolate cereal is Kellogg’s, which has actually been around for over 100 years. According to the timeline on their website, the first major milestone of the company was when W.K. Kellogg created Corn Flakes in 1894.

An accident caused the original discovery of the cereal, believe it or not. According to their Wikipedia article, the discovery came when brothers W.K. & H.K Kellogg were working with wheat in order to make granola. They accidentally let the wheat go stale and decided to try making granola with it anyway.

What they ended up with were thin flakes, which they ended up serving at the Battle Creek Sanitarium. At the time, H.K. was the superintendent there and W.K. was a bookkeeper. The cereal turned out to be a hit, and there were a lot of people trying to get more of the cereal after staying at the sanitarium.

Then some drama started. W.K. Kellogg wanted to sell it to everybody and ol’ Dr. H.K. wanted to keep it with residents and past-residents only. Bum Bum Bum. There was a falling out.

W.K. convinced his brother to let him have the rights to the company and thus it was born.

The first company was built off just the Corn Flakes themselves. That was called the “Battle Creek Toasted Corn Flake Company.” A few years later and we now have Krave double chocolate cereal lining the shelves at my Target and maybe yours.

Front of The Box

On the front of the box, we see large red lettering across the top that reads “FAMILY SIZE” highlighted in yellow. Below that, we’ve got the exciting declaration that this now has MORE REAL CHOCOLATE. I do like chocolate.

In the middle is our cereal’s main title, “Krave,” which is written with some goofy lettering. It also looks like it’s been kind of splashed on to the box. That or someone threw some chocolate at the box and then carefully wrote it.

Either way, the front of this Krave double chocolate cereal has a lot of chocolate on it. Maybe even triple.

I think it should be noted that before we look at the nutrition facts for this, it is chocolate cereal. It’s cereal made of chocolate. When would that ever have crazy healthy ingredients?

Taking it from the top (per serving), this Krave double chocolate cereal has 170 calories, 5 grams of fat, 140 mg of sodium, 31 grams of carbohydrates (including 15 grams of added sugars) and 3 grams of protein.

If we jump a little further down, you can see that there’s a tiny bit of vitamin d, a lot of iron (5.4 mg), 60% of your daily Thiamin and a few other solid vitamins and minerals in there.

It’s actually not too bad! Personally, I need the sugar because of my activity levels every day.

The ingredients aren’t amazing. The chocolate-flavored filling in this Krave double chocolate cereal is fine, pretty much what I expected. Things get a little iffy when we start moving toward the caramel color and corn bran.

Things really go down hill when we get to red 40, yellow 5, blue 1 and yellow 6. Even though these dyes are in a lot of different things, they still aren’t great.

Pretty straightforward. So straightforward, in fact, that there aren’t any cooking instructions for this Krave double chocolate cereal. You can either do what I do and pour some straight into the bowl or go traditional and put ¾ cup milk in with it.

This review, like my last few, is being written after having many servings of this cereal. For some of them, I’ve mixed the Krave double chocolate cereal in with different protein shakes. Others have been the cereal alone and I’ve just been snacking on it.

As they promise, there is a lot of chocolate. The filling is pretty accurate in terms of the amount compared with the picture on the front of the box. Even though this is more of a snack or dessert-type cereal, it could still fit into your breakfast lineup.

Personally, I would stick to having this as a snack-only. Compared to Hershey’s Fillows, it tastes pretty similar. Some of the ingredients aren’t amazing, but it’s also a mass-produced breakfast cereal.