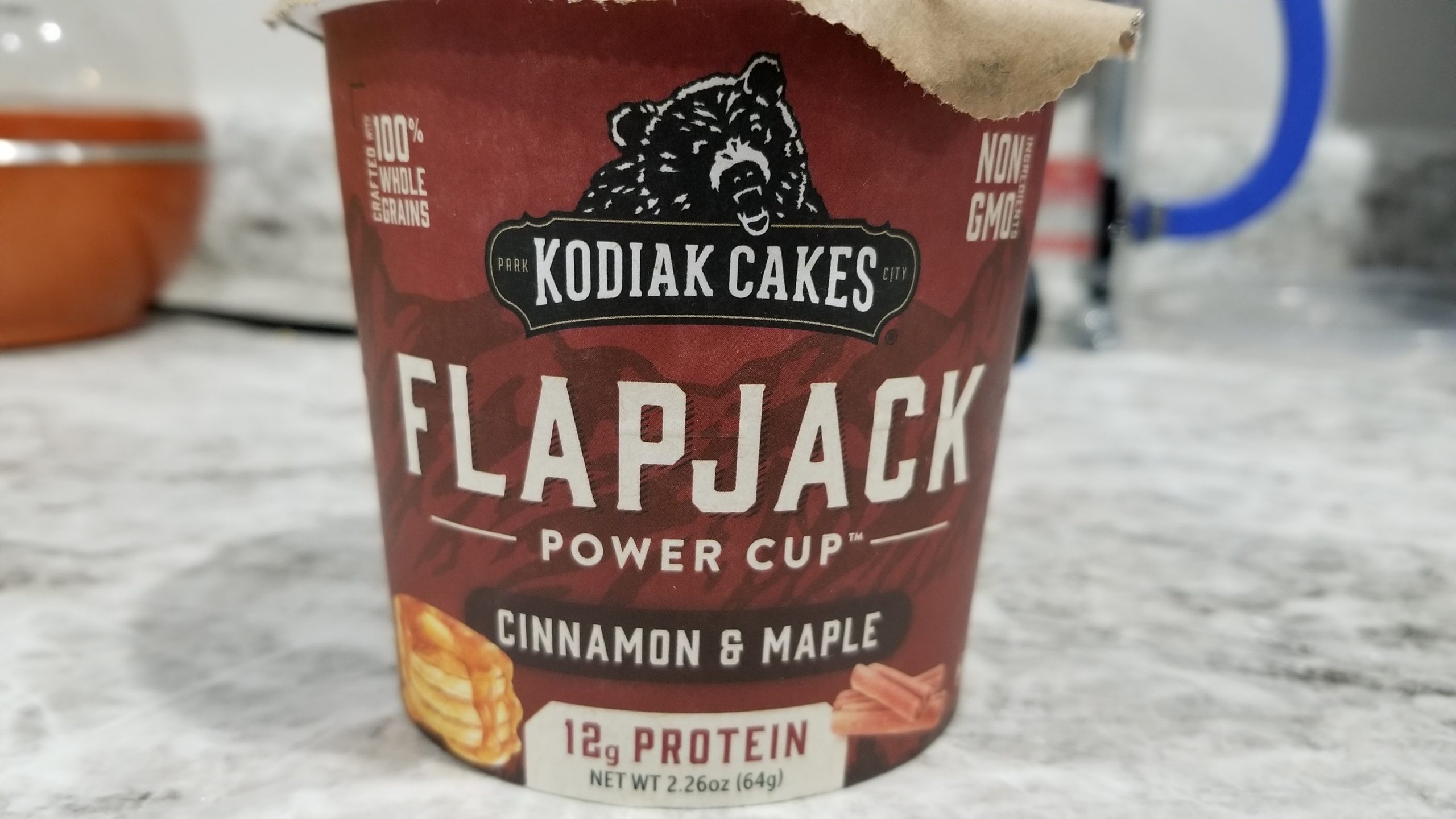 Cinnamon and Maple FlapJack Power Cup from Kodiak Cakes is on the table tonight for us.

So far, we’ve tried a few different types of these pancake cups from that company. Both of the ones before were pretty darn good.

At the same time, the other two we tried both had chocolate in them so it’ll be interesting to see how this pancake cup stacks up. Get it. Pancake. Stack. Yea.

These have done a pretty good job of helping me go to sleep and stay asleep after exercising later at night, so I’m hoping this one is no different than the last two in that sense.

The Company Behind Cinnamon and Maple FlapJack Power Cups

The company (called Kodiak Cakes) has its roots in the early 1980’s. When Penny Clark sent her 8-year-old son Joel into town to sell a pancake mix made with their family recipe, she never expected where things would be 30 years later.

Although it started as a fun summer activity, Joel’s brother Jon decided to try and build a business out of it a few years later in the ‘90s. Things were slow for a while and it wasn’t until 2012 that a deal with Target really put them on the map.

Incidentally, them getting into Target was how I ended up reviewing the cinnamon and maple flapjack power cup right now. I might have eventually tracked these down since a lot of buddies of mine were already buying the products from these guys.

Kodiak Cakes’ theme is a rugged, wholesome, and adventurous. It feels like I’m planning a trip to go mountain climbing just looking at their website.

The front of this cinnamon and maple flapjack power cup is similar to the others we’ve looked at. The top lid/flap on this one has a Kodiak bear roaring at you, too. Front and center is another roaring bear and the reminders that this this 100% whole grain and also non-GMO.

The title of the product, “Flapjack Power Cup” is pretty epic sounding in general. Below that, the major two ingredients – cinnamon and maple are listed for you.

In addition to those, there’s a picture of some pancakes to the left and cinnamon sticks to the right. It seems like the trend with these is to show some of the products that inspired it (like regular pancakes) or some of the ingredients like cinnamon sticks.

Then, last but definitely not least, the reminder of 12 grams of protein in there.

Similar to other Flapjack Power cups, this one also packs a solid 270 calories in there. There’s a little fat with a bit more saturated fat than I was expecting. You’re hardly looking at any cholesterol and just a little bit of sodium in there.

There are some solid carbs in this cinnamon and maple flapjack. In addition to that, there are 16 grams of sugar and 12 grams of protein. It might seem like a lot of sugar to you, but frankly this is the perfect amount that I need considering what else I eat in a given day.

This packs both kinds of 100% whole grain flower – wheat and oat.

You’re also going to get some of that wheat protein isolate again. The cinnamon comes in cinnamon flakes, I’m not sure how natural those sound with their sunflower lecithin and palm kernel.

The maple syrup in there looks pretty good!

Check out that bear next to the bar code on the cinnamon and maple flapjack right here. Guy looks like he’s at the doctor getting his height measured.

The cooking instructions are pretty straightforward here. You just need to pour in ¼ cup water or milk, stir it up and microwave on “high” for 60 seconds.

We haven’t tried making one with milk yet. You really do need to be cautious because the cup and contents will be really hot. So hot that you could sit around for three minutes after taking it out of the microwave and it will still be pretty warm.

The Cinnamon and Maple Flapjack Review

I could smell the cinnamon pretty well when I poured the water in there and was stirring it up. Strangely enough, it didn’t smell a lot like cinnamon or maple when it came out.

The batter on the spoon was pretty good. I’m thinking if I was feeling more shameless, I might’ve drank the batter tonight instead of waiting the 60 seconds.

This cinnamon and maple flapjack had a similar consistency to banana bread fresh out of the oven. The other ones were more like muffins. It took a while for this to cool down to a temp where I could eat it fast, too.

It was actually kind of tough to notice the cinnamon and maple. It was for sure there though. It’s tough to say if more cinnamon/maple taste would actually be better, since overall it’s a pretty good pancake cup.