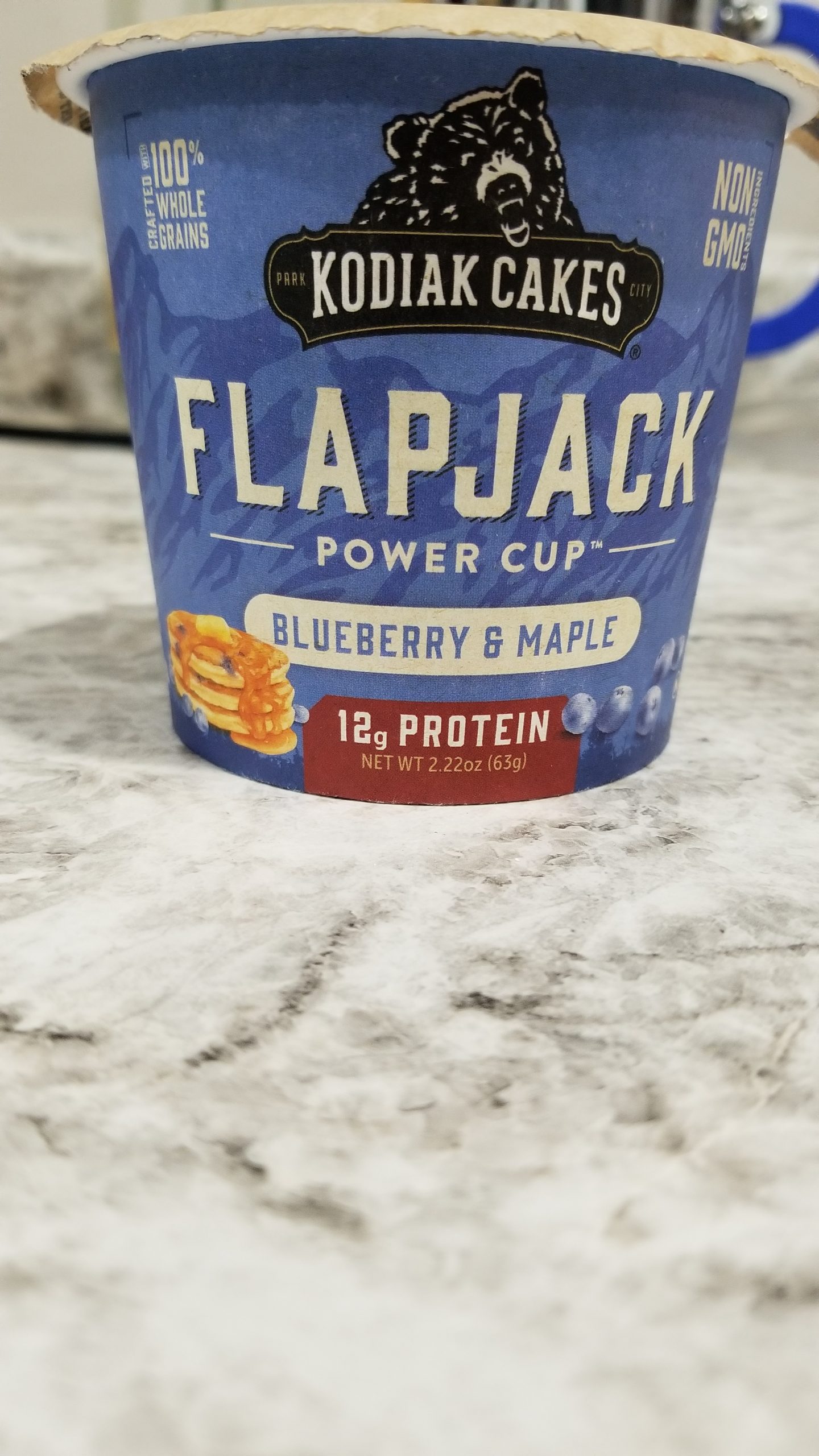 Blueberry and Maple Flapjack from Kodiak Cakes is the review to wrap up the week.

After trying a few with chocolate or ones that were cinnamon flavored, it only seemed right to work some fruit into the mix.

Plus, the maple in the other one that I had was pretty good.

Blueberries carry a number of health benefits, too. It’s possible to go as far as calling them the “King of Antioxidant foods,” according to Healthline. Antioxidants do something healthy for you that I can’t explain because I’m not a doctor or a dietician.

This blueberry and maple flapjack comes from a company called Kodiak Cakes. They operate out of Park City, Utah (or at least that’s where their mailing address is). The business was really started way back in the early ‘80s when co-founder Joel Clark’s mom sent him into town one day.

Penny Clark had made pancake mix with an old family recipe and sent it with her son to go sell for a fun summer activity. A few years later in the mid-90s, Joel’s brother Jon would actually take the steps to formally put a business together and start selling the pancake mix in larger amounts.

One of the first things he did was make his mom’s recipe into an “add-water-only” mix. That’s how this blueberry and maple flapjack cup works and it’s awesome.

For the first few years of business, money was tight and growth was slow. Joel and Jon ran the business together for a little while, but Jon eventually turned it over to Joel in order to get a job with more consistent income.

Joel ended up doing a bunch of various things on the side and different full-time jobs while still operating Kodiak Cakes as a side-project.

Eventually (and I mean eventually because it still took a long time) in 2012 they got into Target and things really started to take off. They even made an appearance on Shark Tank at one point.

Now, the company’s sales are way over $100 million annually and business is going strong.

The blueberry and maple flapjack package is pretty blue. I’d say that’s fitting. The top of the lid shows that same bear growling who’s front and center. Either side of him mention how it’s 100% whole grain and non-GMO, too.

Underneath that, we’re reminded that this is a Flapjack Power Cup. That name does sound pretty epic. Power Cup. Below that, the core ingredients of blueberry and maple are listed.

As is the trend with these flapjacks, there’s also a picture of blueberry pancakes to the left and some actual blueberries off to the right. Who could forget those 12 grams of protein in the middle?

This blueberry and maple flapjack review is the first one where we’ve seen a power cup with less than 270 calories, I think. This one had 7 grams of fat, 4 grams of saturated fat (which is 20% of your daily value, by the way).

There’s a healthy chunk of carbs in there at 38 grams with 16 grams of sugar within those carbs. To top it off, we’ve got those 12 grams of protein.

In line with other pancake cups, this blueberry and maple flapjack has 100% whole grain wheat flower and 100% whole grain oat flower. Also, that wheat protein isolate gives you that extra protein boost.

I’d never heard of honey powder until now, but that’s definitely a thing.

As far as I know, all of these power cups have the same cooking instructions. You just open the lid, add ¼ cup of water, stir thoroughly, and microwave on high for 60 seconds.

We still haven’t tried the milk option yet.

The Blueberry and Maple Flapjack Review

It’s a blue container, that definitely does something sub-consciously for me. The blueberries smelled very blueberry-y while I was mixing the water in there. These were some kind of tiny dried blueberry like you would find in breakfast cereal.

I didn’t feel like this batter was drinkable, it had to be fully cooked. Some of the other power cup batters were good enough to eat like soup. I needed to cook the blueberry and maple flapjack all the way through.

This one also seemed to rise up a little higher once it was fully cooked compared to the s’mores or chocolate chip ones. This one was also pretty hot for a while. Once I could dig in, it tasted like a muffin with a better sugar balance than most muffins out there.

It was very moist and fluffy, too. Since I’m a pretty big blueberry guy personally, this one was exciting to try. I did notice that the blueberries in this were pretty small in general and almost seemed to shrink a bit more during cooking.

You won’t be getting the burst-in-your-mouth giant blueberries like in grandma’s pancakes.

Ultimately, as with all of these cups so far, this one was pretty darn tasty.