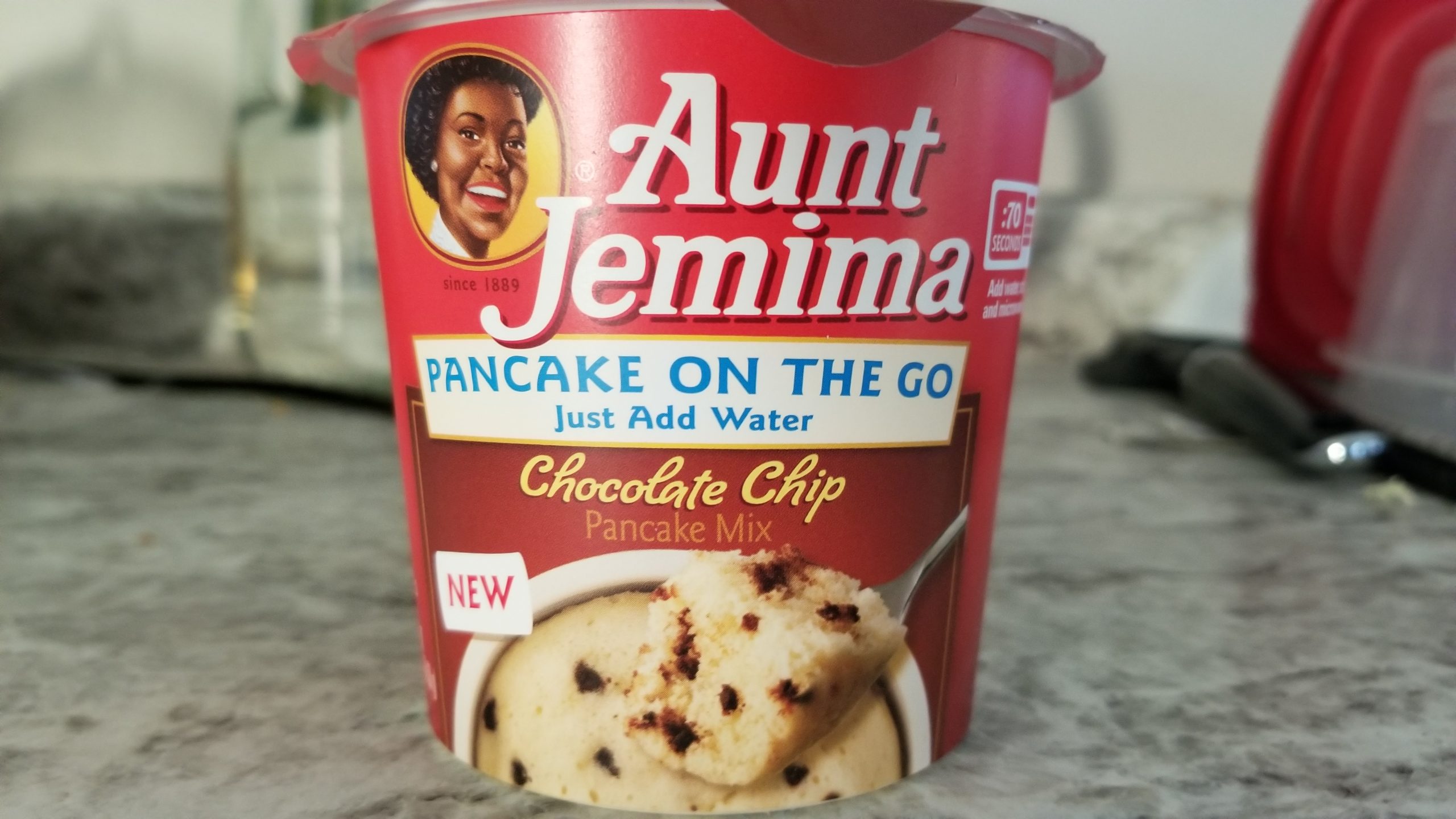 Aunt Jemima Chocolate Chip pancake on the go is up for review tonight.

Now that we’ve been through a bunch of the pancake cups from Kodiak Cakes and had our fun with the best-sellers, it’s time to try out a competitor.

Plus, I’ve somehow never had any of the Aunt Jemima products despite their long-time existence. They have this chocolate chip version of the pancake cup to compete with the Kodiak one.

Let’s find out if the other articles on the internet are true or if this does hold a candle to Kodiak. This doesn’t cost a lot of money, either, it was $.99!

The actual brand Aunt Jemima has been around for over 130 years. Currently owned by Pepsi, they will be changing the name in 2021 so the Aunt Jemima Chocolate Chip pancake on the go will…..go by a different name at that point.

On a really serious note, the history is actually pretty racist. The Aunt Jemima brand was created based on the stereotype of enslaved black women who were tasked with raising white families kids.

The origins of the company go way back to the late 1800’s. A guy named Chris Rutt and his friend Charles Underwood bought a flour mill back then started working on a pancake mix.

Their mix ended up being the first ready-mix. The mix wasn’t quite created by them alone, though. It took going broke and the sale of their short-lived company to the Randolph Truett Davis Milling Company in 1890 to get the brand widely recognized.

Quaker oats (now a subsidiary of Pepsi) bought the brand in 1926.

A little under 100 years later in 2019, they released the Aunt Jemima chocolate chip pancake cup.

The front of the package for this looks pretty similar to other Aunt Jemima products. They have the picture and title of the brand (soon to be removed) and the “Pancake on the go” below that.

They still included “pancake mix” in there, I mean I guess that’s technically what it is.

The picture on the cup does kind of look cake in the picture there. That or a partially cooked pancake. Plus, it’s NEW!

Slightly off to the side, it also lists the cooking time for this at :70 seconds in the microwave.

These Aunt Jemima chocolate chip pancake cups have slightly less calories than other pancake cups on the market at 230. Not too much saturated fat, either. There is close to 1/3 of your daily recommended amount of sodium in this, though.

You get a few carbs, but not as many as I thought. The expected sugar’s in there as well. In addition to that, there’s some Thiamin, Riboflavin, Folate and a few other things.

So, the ingredients in this aunt jemima chocolate chip pancake cup are pretty standard, too. You get pretty normal enriched bleached flour and chocolate.

But then, the leavening contains “sodium aluminum phosphate” and also tocopherols, which are preservatives.

One of the really nice things about this Aunt Jemima chocolate chip pancake cup is that it has a fill line in it. Yes, you could measure out 1/4 cup of water and pull out the measuring cup. But why do that when you’ve got the fill line? Nicely done Quaker Oats.

Then, you need to stir it with a fork and throw it into the microwave for 70 seconds.

The first thing I noticed after mixing this was that the batter was very tasty off the fork. The Aunt Jemima Chocolate Chip Pancake Cup definitely has drinkable batter.

Once it was cooked, it did taste a little more like cake than a pancake. Can’t have cake without pancakes, I guess.

Overall, the taste was fine, though. It was a little on the dry side, but, I even exceeded the fill line in there so it shouldn’t have been an issue. It really needed some syrup or a syrup packet maybe.

For 99 cents, it’s definitely worth throwing one in the cabinet.