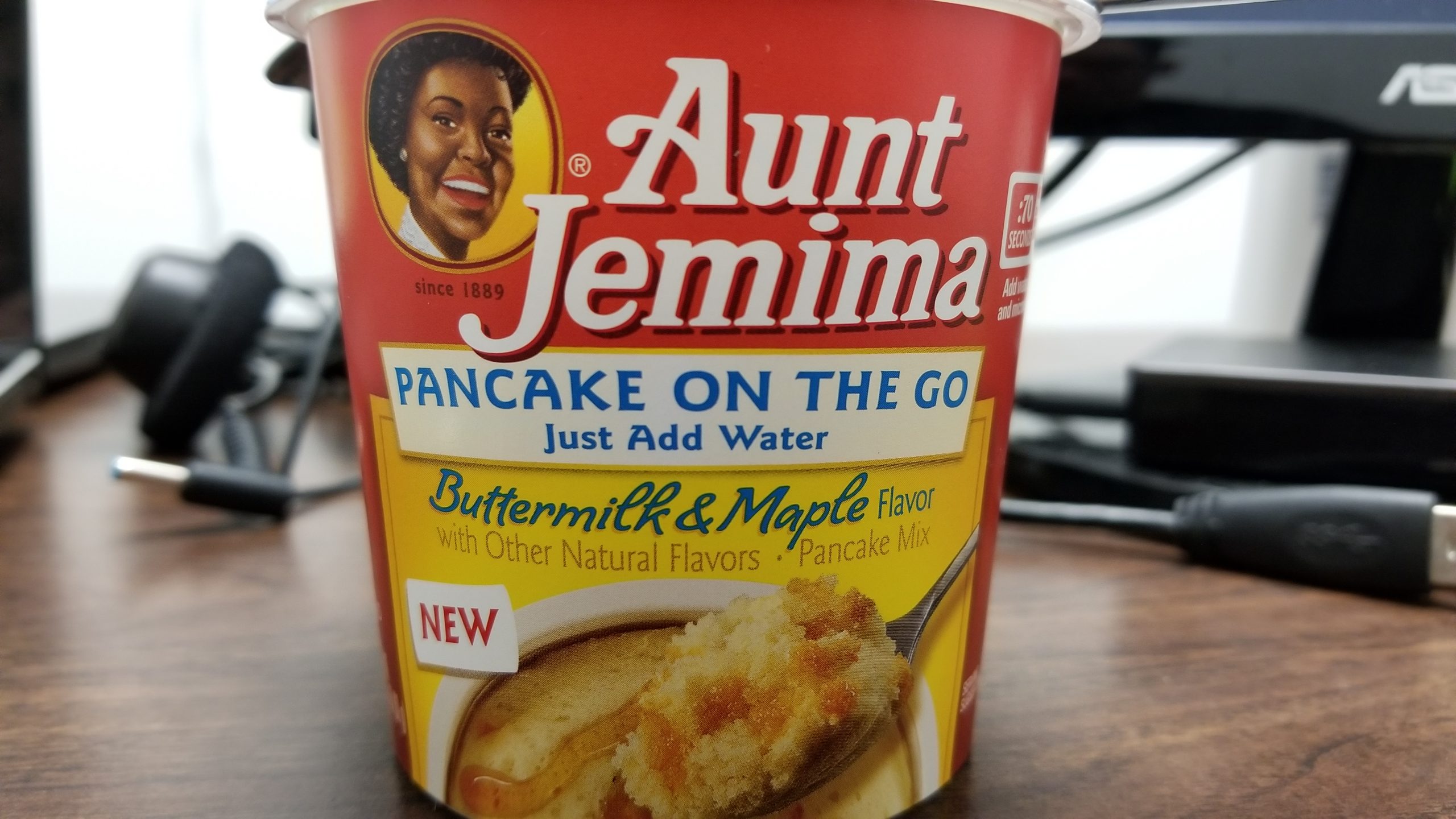 Aunt Jemima Buttermilk and Maple pancake cup is on the table tonight.

After trying out the chocolate chip Aunt Jemima pancake cup, we figured this would be good to pick up, too.

This one also didn’t cost much money and it was only $.99 at Target, which was a big plus right away. The choco chip one was the same price.

As a side, I’ve never had a buttermilk and maple pancake. Would definitely be open to it but never had one. Seems like most recipes are regular buttermilk.

We went into this a bit with the last Aunt Jemima product review. Pepsi is actually planning to rename the brand in 2021 because of some, er, slightly racially insensitive history of the name.

Did I say slightly? Let’s amend that to “very very very racist history of this brand name, to the point I’m surprised people haven’t outright stopped buying it.” Yea, that’s a better fit.

Basically, the original brand name was started by two guys named Chris Rutt and Charles Underwood. The two of them sold “self-rising pancake flour,” and later called it “the first ready-mix.”

Ready mix is one of those big game-changers in general. As I’ve discovered in my 20’s, making food with minimal effort is usually the way to go. The Aunt Jemima Buttermilk and Maple pancake cup is definitely something that adds some convenience.

Those two guys ran out of money pretty quickly despite their good idea. As a result of that, they sold the company to the Randolph Truett Davis Milling Company. They tweaked the recipe, built up sales, and eventually sold it to Quaker Oats who still holds it today.

Quaker is now owned by Pepsi. That’s a couple subsidiaries.

The Front of Aunt Jemima Buttermilk and Maple Pancake Cup

On the front of the Aunt Jemima Buttermilk and Maple pancake cup, it has the controversial name and logo at the top. Off to the right are the microwaving instructions. The title of these are actually “pancake on the go,” but calling them pancake cups just rolls off the tongue better.

In a yellow window near the bottom you’ve got the “buttermilk and maple” flavor listed with a picture of a spoon scooping some cooked pancake cup out. Looks like there’s some syrup in there, too.

As an FYI, there is no syrup in the Aunt Jemima Buttermilk and Maple pancake cup. You’ll need to add your own if you want that.

This has 220 calories in it, so it can be a decent snack if you’re craving something. Definitely good for something late night to make you go back to sleep.

The Aunt Jemima Buttermilk and Maple pancake cup has a little bit of fat, almost a third of your daily sodium, but then no cholesterol at all. The carbs are a little less than I thought, but there’s a nice bit of sugar in there if you need some of that.

For me, I needed to add some sugar to my diet and all of the pancake cups we’ve reviewed so far have been great for doing that. Sugar gets vilified by the media a bit and everyone seems to say it should be cut out of a diet completely.

That doesn’t work for me. Don’t forget that this also has a little protein in there!

The ingredients in this actually aren’t terrible. On the other hand, you’ll notice the usual preservatives in there toward the end. The enriched bleached flower is pretty par for the course with a lower cost carb-rich item at the grocery store.

Then, you’ve got some nonfat dry milk, dry whole milk, and cocoa powder in there. Those sound pretty good-I’ll give you that, Aunt Jemima Buttermilk and Maple pancake cup.

Then there’s that wheat protein isolate, which we saw in some of the pancake cups from Kodiak Cakes. I never knew it was a thing while I’ve been putting down tons of protein powder shakes myself.

Remove the lid completely and pour water into this up to the fill line. It’s about 1/4 cup of water. The Aunt Jemima Buttermilk and Maple pancake cup cooking instructions are pretty similar to others out there.

Their cooking time is a little bit longer, though. Not by much, just a few seconds.

This was a pretty basic pancake in a cup. The chocolate chips were in the last one we had, but this one was strictly buttermilk and maple. One of the interesting things about this was that it had these little maple pockets in the cup.

Those were tasty and enjoyable, especially since that’s the first time I’ve had something like that outside of a muffin. The rest of the pancake was a little boring to tell you the truth.

If it had syrup on it, that would have been a game-changer. It was definitely dense and the taste was fine. In terms of being a great source for late-night calories to get you back to bed, it would definitely work well for that.