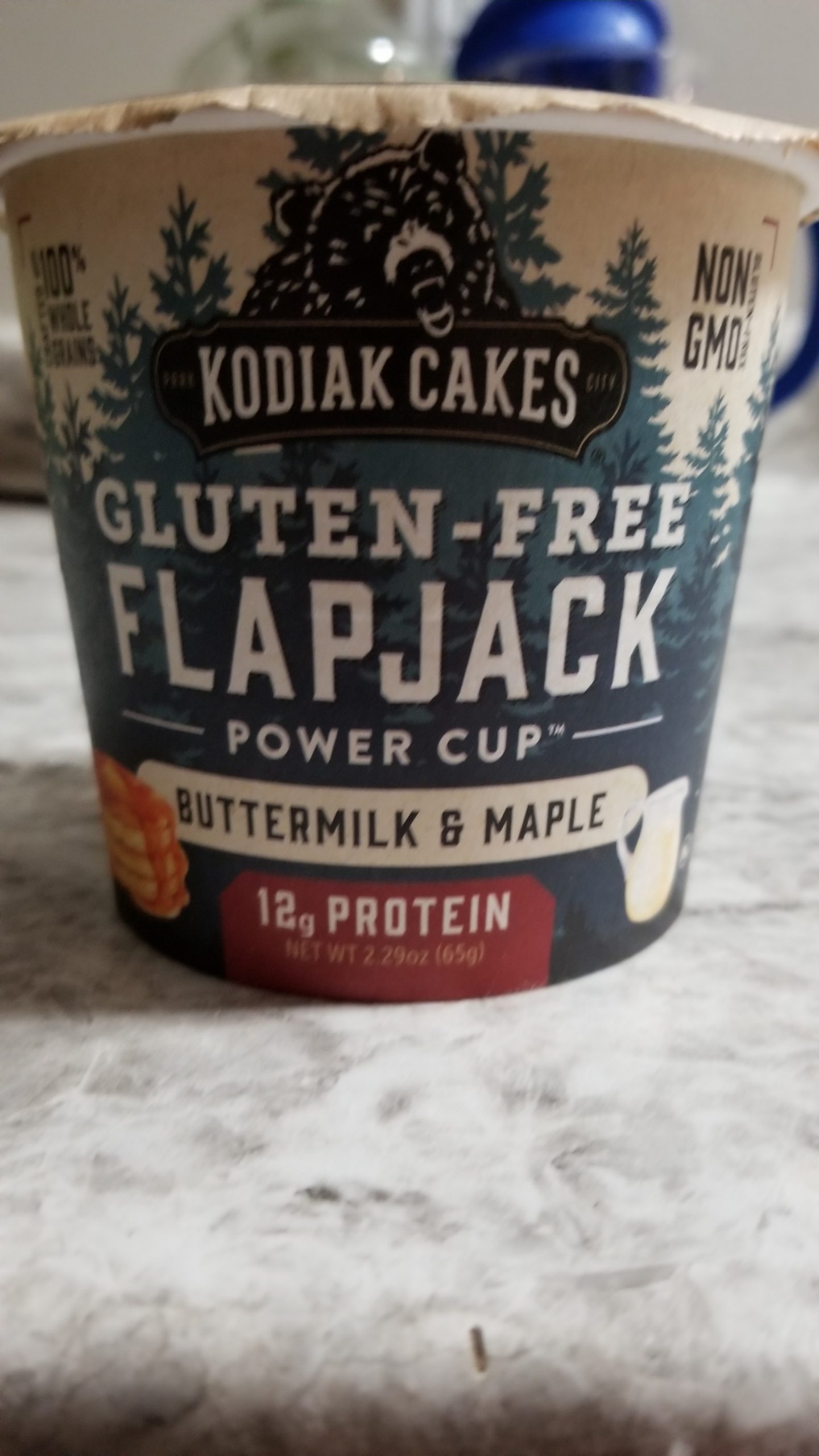 Gluten-Free Buttermilk and Maple Flapjack is on the table for review tonight.

After eating all the other Power Cups from Kodiak Cakes that had gluten in them, I was actually starting to hack some stuff up by the end of last week.

To be clear – anything with gluten makes that happen to me if I have enough of it, especially right before bed. About a year and a half ago, I decided to only eat the cheapest pasta possible from Wal-Mart for a week-ish straight.

That was all I ate and it was loaded with gluten. The main reason was because I was over-doing it on healthy fats and hadn’t slept much. The carb/gluten intense diet did make me sleep like a rock, but it also pretty much tore a hole in my gut.

Seriously, after 7 or 8 days, I had a cup of coffee and it came out my nose a few minutes later. Not even kidding. I’m definitely not the most effected by gluten, but, I’m also not immune to it in enough quantities.

I didn’t even notice this gluten-free buttermilk and maple flapjack in the shopping cart, I just grabbed as many Power Cups as I could throw in and bought everything.

The company that makes this and the other Flapjack Power Cups I reviewed in the last week is called Kodiak Cakes. Their story goes back pretty far into the ‘80s when the current CEO was just 8 years old.

His name’s Joel Clark, and back then, his mom had him going door-to-door selling pancake mix for fun one summer. Fast forward a few years, and his brother Jon was actually the one who set up the company in the mid-90s to start selling the mix on a larger scale.

The business strung along and didn’t make much money at first. It was bootstrapped for a number of years by Jon and then Joel, who eventually took over the business because Jon needed a more consistent income to support his family.

In 2012, after a deal with Target really put them on the map, things did start to take off pretty fast for them. Then, going on Shark Tank got their name out there even more and resulted in them being sold out at Target soon after.

Now, the company has sales of $160 million annually and they keep putting out awesome products like the gluten-free buttermilk and maple power cups. In addition to that, they have been rated one of the best companies to work for in Utah.

The front of this one has more of a forest going on in the background compared to others like the s’mores Power Cup. At the height of the forest, of course, there’s that epic Kodiak bear wildly roaring. Would not want to make him mad.

Then, it shows that this is 100% whole grain + on-GMO as well on either side of the roaring bear. I didn’t think that whole grains could even be gluten free, so this gluten-free buttermilk and maple review should be interesting.

Below the title of large “Gluten-Free Flapjack,” the core flavors – buttermilk and maple are listed. On either side of those are delicious pictures of each. Actually, it definitely looks more like cream next to the maple in that pitcher down on the right. Huh.

These gluten-free buttermilk and maple power cups actually carry more calories than others. Not by much, since the first few we did had 260 or 270 calories in them.

There’s a little bit of fat in there and not too much cholesterol. Sort of a lot of sodium given the number of calories in this, but not a ton.

It’s got a nice balance of carbs, sugar and protein.

The main ingredient in this gluten-free buttermilk and maple Power Cup is the 100% whole grain oat flower. In addition to that, we see the usual other ingredients you would find in pancakes – with some more wholesome since this comes from Kodiak Cakes.

The brown sugar and the maple syrup are mainly what I’m talking about.

The cooking instructions for this gluten free buttermilk and maple Power Cup are no different than the other ones. You just need to throw in ¼ cup of water, stir thoroughly, and put it in the microwave for 60 seconds.

The batter in this one was very drinkable (taste testing it off the spoon). Although, it did seem like it was chunking a lot while I was mixing it. This rose all the way to the top of the cup while cooking, too.

Not all of them have lifted up that far. This gluten-free buttermilk and maple does taste pretty close to buttermilk pancakes. On that basis, it was really good.

I have been spoiled by eating the ones with chocolate and blueberries in them first. This really needed some syrup to go with it. I mean at least something. It wasn’t bad, but the gluten-free buttermilk and maple was just kind of boring without it.

If you need to stay gluten-free, this thing is incredible to do that with and have the same taste as things containing gluten.