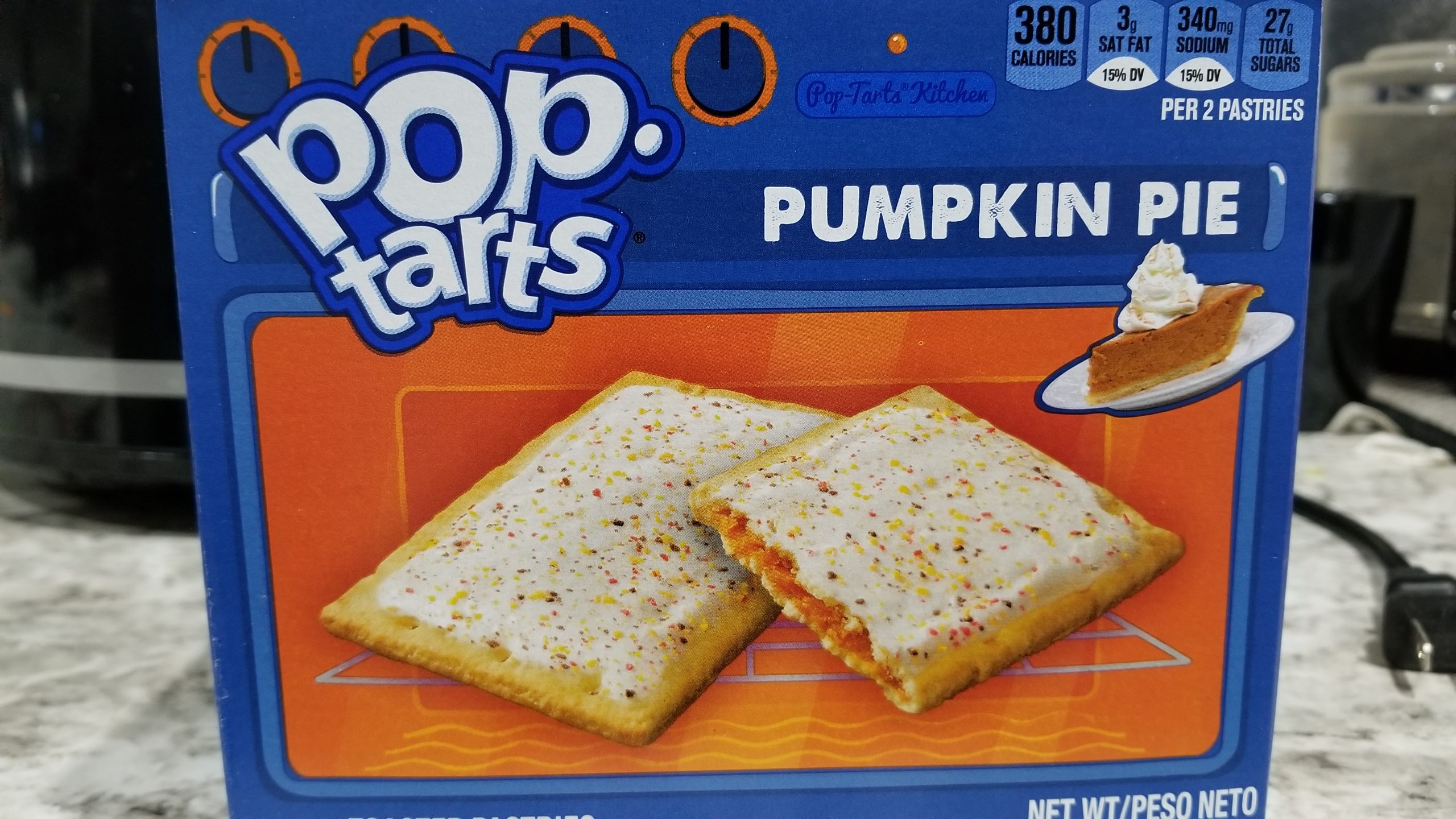 Pumpkin pie Pop-Tarts are on the table tonight now that we’ve just had Thanksgiving and ate some real pumpkin pie to compare them to. Since there are twelve of these bad boys in the box, I even had one on Thanksgiving for some real-time comparison along with the pair being reviewed now.

Personally, I love me some pumpkin pie. It seems like a mixed bag with some people kind of liking it and some people being more eh about it. Either way, the stuff tastes incredible to me and I jumped at the opportunity to get a box full of these Pop-Tarts.

Pop-Tarts have been known to come in the form of a lot of different things throughout the years, from the classic s’mores and strawberry to more outrageous and unhealthy variations like birthday cake.

I love them all despite my fully contradictory obsession with trying to eat healthy. A little cheating never killed nobody, alright? Okay.

Post actually came up with these first – but they told everybody way too early and Kellogg developed their own product to take the market first. You know what they say, if you leave your idea in the toaster too long, it might burn up. Something like that.

This all happened over 40 years before the pumpkin pie Pop-Tarts came out, way back in the mid-60s.

Anyway, Kellogg came up with this viral commercial series that looked a lot like the Brave Little Toaster before that movie was a thing:

Now, it’s impossible to not know what Pop-Tarts are and I’m sure there are a few Thanksgiving-themed ads out there for these Pumpkin pie Pop-Tarts themselves.

The “Crazy Good” ad campaign also never gets old for me. I think the secret is the commercials being short, sweet, and slightly dark (but not uncomfortably dark).

There is a lot going on with the front of this box. Starting from the top left corner down, we’ve got these four things that kind of look like clocks but I’m pretty sure they’re meant to be pumpkin pies. Then there’s the timeless Pop-Tarts logo that literally pops at you.

Wait – I’m just realizing this, okay, the front of the box is an oven. Holy clever.

Those aren’t clocks, those are oven dials. Now it makes more sense. Those kind-of-3D pumpkin pie Pop-Tarts shown front and center are supposed to be cooking in the oven.

It all makes sense now. In addition to that, we’ve also got a slice of pumpkin pie in the upper right-hand corner of that oven.

I’m a little surprised it doesn’t say “limited edition” or “limited time only” on the front like the older ones did. These have been around since 2010, I suppose.

These are actually a little more calorie-light than other Pop-Tarts out there. One individual s’mores Pop-Tart will run you 200 calories, but the overall difference isn’t that big. Two of these pumpkin pie Pop-Tarts are 380 calories and 96 grams.

There’s actually a little saturated fat in there, too. 3 grams of it! Not super bad but it’s in there.  The main attraction will be your carbs – 68 grams total. Of that, there’s 27 grams of sugar, about 54% of your recommended daily value.

That depends on your activity level and if you are on a 2,000-calorie diet. Personally, I need a little more than that myself.

Look, we all know Pop-Tarts aren’t super healthy. It’s a given. Let’s do this.

You’ll have some enriched flower, high-fructose corn syrup (as is tradition), dextrose and who could forget – bleached wheat flour.

Now for the best part – these contain 2% or less of pumpkin. Frankly, they tasted pumpkin-like enough for me. If you have any milk, egg, or soy allergies, be careful with these. They contain all of those things.

By now, Kellogg has fully embraced that people enjoy making these in a wide variety of ways. You can heat’em, stack’em or even freeze these pumpkin pie Pop-Tarts and eat them cold. I’ve had them all three ways and I can confirm I like them every way.

The first one I ate was straight out of the package, no toaster oven for it. That one was pretty decent, despite the kind of sad presentation with the top frosting. The pumpkin pie filling itself was tasty and pop tart crust already tastes like pie crust naturally.

This was no exception.

The pop tart I made in the toaster oven was really good. Very crispy on the outside, gooey on the inside. It actually tasted a lot like a warm slice of pumpkin pie. I just wish there had been more filling it in, that was really the heart of the pastry.

The top frosting felt a little bit like the same one they put on strawberry pop tarts. Like, it’s okay but necessary crazy good or anything wild like that.

Recommend Pumpkin pie Pop-Tarts? Yes, if you can find it! These are good.