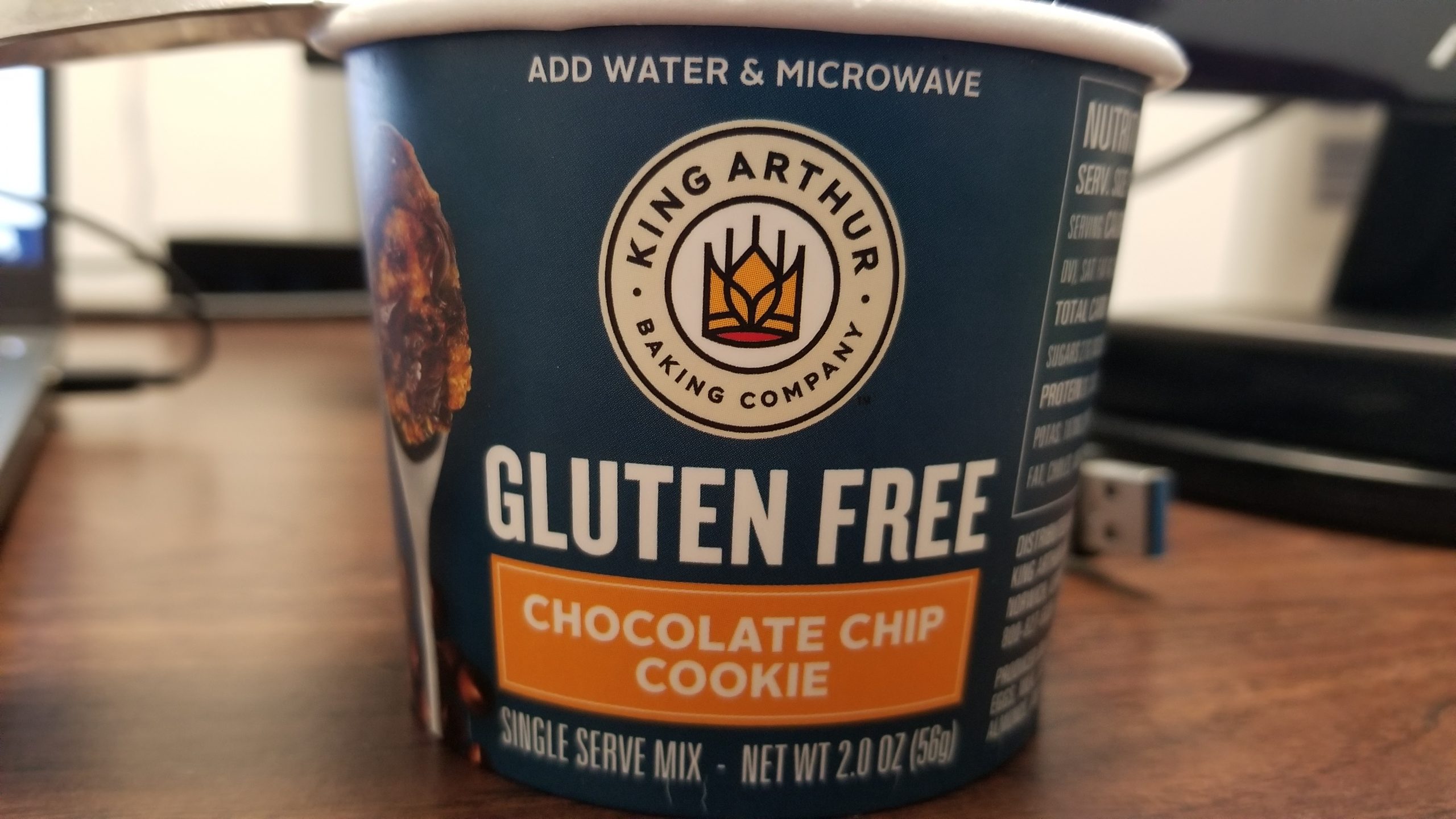 King Arthur chocolate chip cookie cup is on the table tonight. We’re looking at this one as a follow-up to the brownie cup they offer from the other day. That one turned out to be pretty good (and we didn’t miss the gluten in there).

This one definitely has a challenge, considering that the way brownies cook. They can be in any shape or form around any container they’re put in. When it comes to cookies, they usually go on a baking tray and they all kind of look the same.

This will definitely be the right shape, but it’s probably about to be a cookie with more depth than we’ve ever seen. Might be tough to call it a real cookie, but we’ll see what happens.

This company has some history behind it. A lot of history. They’ve been around since America was just a wee little country with 13 states in 1790. It started with a guy named Henry Wood.

Back then, Mr. Wood was more focused on importing flour from England than making these King Arthur chocolate chip cookie cups. He built the first flour company in the United States, in fact.

Throughout the years, his flower would come to be associated with legendary American baked goods. Slightly before the 1800’s, the first apple pie appeared. In 1849, sourdough bread started to…rise on the scene. Then, in 1886, pecan pie made its debut into the world.

A different guy named Benjamin Sands took over the company in 1870. About 25 years later, the business would be reorganized to reflect two other owners. It was pretty soon after that in 1896 that the company actually became King Arthur.

Now we’re getting closer to those King Arthur Chocolate Chip cookie cups – but we’re not there yet! It wasn’t until 1933 when Ruth Wakefield (owner of the Toll House Inn) accidentally invented chocolate chip cookies. In the coming years, there would be more awesome innovations with baking and a lot of growth with the company.

These dessert cups came along in 2019, just about a year ago now. Let’s take a look at the front of the one we’re eating tonight.

I think there’s a point where we need to draw the line of what a cookie is and isn’t. The front of the King Arthur Chocolate Chip cookie cup shows a spoonful of something that does look pretty delicious. The only problem is that’s definitely not a chocolate chip cookie!

To reiterate, it looks like delicious chocolately, cookie-ish goodness on a spoon. It’s like if someone got a hot bucket of Sweet Martha’s at the Minnesota State Fair, dug a spoon into the warm cookies, and pulled out a melty glob of it on the spoon. That doesn’t mean it won’t taste great, but it does not count as a cookie!

We also see in the large lettering that this is nice and gluten free. The brownie cup did not disappoint in that regard. The message of “add water & microwave” is reassuring that we won’t need to do much with this for prep, but more on that later.

This cup has got 250 calories at a total weight of 56 grams. There’s 9 grams of fat in there, too. It actually has a little less carbs than I was thinking it would, but still a decent chunk of them nonetheless. As to be expected with a cookie, especially this King Arthur Chocolate Chip cookie cup, there’s a little over half of your daily required amount of sugar in there.

I always notice the King Arthur coconut flour at Target and other grocery stores, but I’ve never seen their rice-based flour. Eating the Amy’s rice noodles were different but ultimately pretty good, so I’ve got high hopes for this one.

There is some soy in there with – gasp – maltodextrin as part of the molasses. That’s a bummer. On the bright side, there’s a handful of additional good things in there like the gluten-free whole grain flour and chocolate.

As we guessed, these cooking instructions are pretty straightforward. You just need to remove the lid, throw in a tablespoon (or probably just a splash) of water, microwave for 30 seconds, and let it cook for 2 minutes.

They really don’t want you to eat the batter of the King Arthur Chocolate Chip cookie cup, but it’s pretty difficult to resist. You should not eat the batter raw, but I almost drank all of it.

Actually, it was more like a cookie with no chocolate chips in the top. When I stuck a spoon into it, though, the cup answered on the missing chocolate. Right below the unassuming surface, there was a goldmine of it.

They were gooey and messy, too. Heck, the whole thing’s gooey and tasty. In addition to that, it was still somehow pretty cookie-doughy on top of that.

It looked a little like peanut butter all swirled around in there. If you need a sugar fix that’s gluten-free, this King Arthur Chocolate Chip pancake cup is your guy.