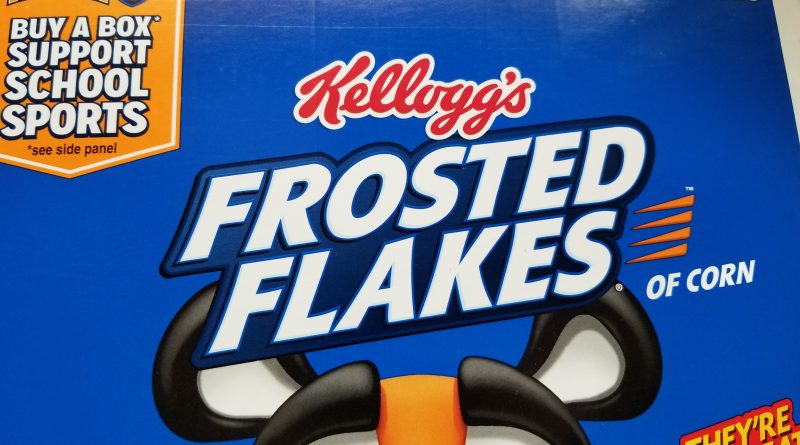 Frosted Flakes nutrition is something that a lot of parents probably want to know. Why? Because a lot of Kellogg’s cereals are advertised as being healthy. Well, not exactly. The official “healthy” message had to end in a lawsuit that cost the company a bunch of money in 2019.

They had to pay out over $20 million to people who had been mislead by false advertising claims. But here’s the thing: Frosted Flakes nutrition still looks pretty sugary. We’ll get into the nitty gritty with the label here in a minute, but it seems weird that they would have a lawsuit with their mini-wheats and still be able to cover the box of this cereal in sports equipment (while also maintaining a high sugar content).

The box just seems really really heavily tied to athletics. Don’t get me wrong, they do some good with philanthropy as far as getting kids basketball hoops, benches, and scoreboards. It just feels a little weird. Personally, I love the cereal. From lifting weights and exercising a lot, Frosted Flakes nutrition is perfect for me as an adult. How bout we take a look at that label.

So, this does have a lot of sugar in it. Can’t disagree with 24% of your daily value in 130 calories being kind of a lot. At the same time, though, this has a lot of redeeming qualities.

Number one, there’s no fat in it at all. That’s gotta count for something. Number two, the Frosted Flakes nutrition label shows a lot of really solid vitamins and minerals in there. Considering that I usually eat two cups of this, being at 80% of my daily iron in two scoops isn’t too shabby at all!

That being said, I could also easily go way over on iron if I’m not careful on the days where I’m eating two servings. Especially if I’m having Moser Roth 85% dark chocolate that day. You also get some solid b vitamins in there with a splash of vitamin D, too.

The most remarkable thing about this cereal is how simple it is. I’ve never seen a cereal be so simple or straightforward, it’s just milled corn, sugar, and malt flavor (plus the vitamins). That’s another concern, though, since we can’t really digest corn. Oddly enough, I still feel pretty good after eating a lot of this and it doesn’t seem like a huge deal for me.

There’s also a thing here about how you’re helping Tony’s mission by eating like a tiger. My only thing with that is if tigers had to live off Frosted Flakes nutrition, I’m not sure how long they’d survive. Especially since they mostly eat pigs and other things with red meat. Anyways, you can upload your receipt to get $2 donated toward getting resources for more students to play sports.

Whether it’s possible to digest parts of the cereal or not, I think it’s a mission we can all get behind.

I enjoyed eating this cereal. It wasn’t my first pick in the aisle (that was Coco Puffs) but I did go back for a second box once I chomped through the first one. Can’t say eating this right before going and playing sports is a good idea, but, Frosted Flakes nutrition is pretty good for post-exercise recovery. Contrary to what people might think, you actually do need sugar after exercising to help rebuild muscles.

I know this review got a little critical, but I still recommend the cereal. Plus, you don’t see other brands going and building basketball courts to get kids active. There’s something to be said about that.