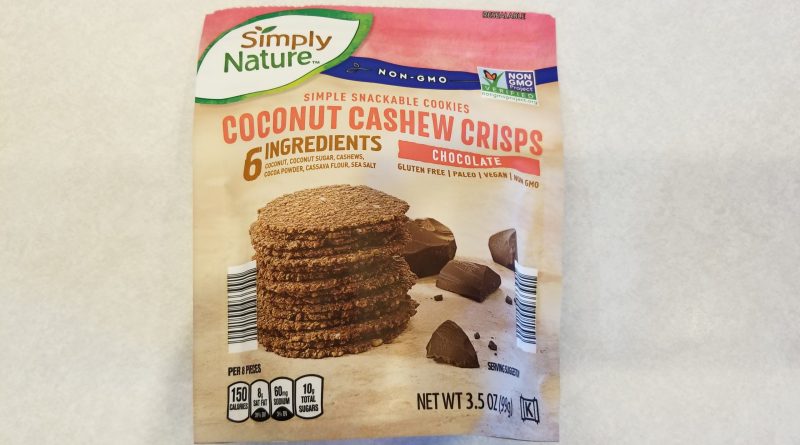 Aldi Coconut Cashew Crisps are on my plate right now and I’m trying to decide how to eat them. They sort of resemble potato chips but at the same time not really. Chips are more curved and these things are flat. They’re like flat bagel chips that are also a little bigger.

As the name implies, these are made out of coconuts and cashews. Kind of an odd combo if you ask me but it does sound good. I’m assuming that a lot of grinding and pressing goes into making these Aldi coconut cashew crisps. How else can you get coconut AND cashews to work together like that?

We’ll be going over the Aldi Coconut Cashew Crisps in detail with nutrition facts, ingredients (got a couple good guesses what’s in ’em) and a review at the end here. These run for $2.99 at our local Aldi here in Minnesnowta.

That does feel a little on the higher end, however, these look pretty healthy. If you’re feeling motivated to eat something good, these will probably be worth the extra bit of money (at least we’ll find out).

The first thing I noticed about these is that there is a lot of fat in them. Cashews and coconuts do both have a pretty high fat content and fit into the keto diet, though. It always surprises me a little bit when I get reminded that coconut has so much saturated fat. It’s not that much more than something like 1 serving of Aldi’s Moser Roth dark chocolate bars, however.

Each serving packs 150 calories into 8 of the crisps. They are pretty substantial in size, but if you really want to have an accurate calorie count, use a scale. The Aldi coconut cashew crisps are not all identical, so it’s tough to eyeball the amount of calories you’ll be getting. These also have a little fiber in there plus more sugar than I was expecting. That’s probably partially there to hold it together.

These things keep it pretty simple: coconut, coconut sugar, cashews, cocoa powder, cassava flour and sea salt. I got pretty into eating cassava (also called yuca root) for a while myself. It’s actually pretty tasty. You’ll need to go to Fresh Thyme or another grocery store for that, though, since it isn’t carried at Aldi (at least I don’t think it is).

Here we go. These bad boys are, um, good boys, I guess. Yea, they taste good. They have a nice chewy texture to them and there’s no mess because coconut and cashews being mashed together don’t make a bunch of crumbs everywhere when you bite in.

If you really wanted to make crumbs and have a Nature Valley-type thing going on, to each their own. You could always throw the bag around or smash it with a meat tenderizer if you really need those or want to eat it like cereal. As I mentioned earlier, these are a little bit on the pricier side and only contain three and a half servings. Consider it an investment in your health to buy these Aldi coconut cashew crisps.