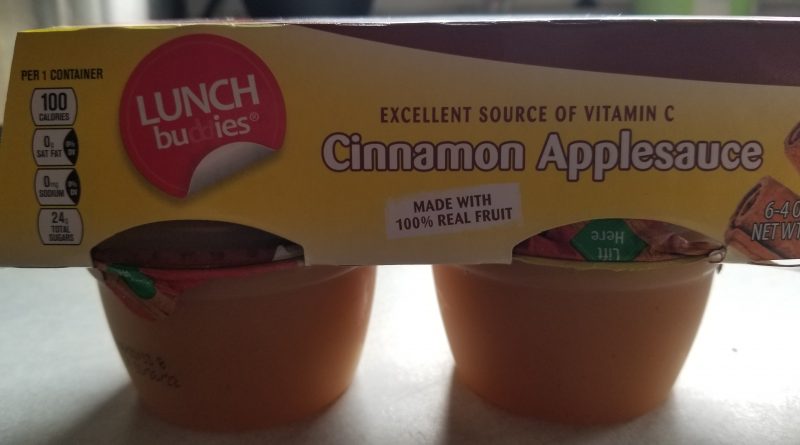 Lunch Buddies Cinnamon Applesauce will be my review today. Make sure you don’t confuse that with lunch friends or lunch pals. It could easily happen! This is a healthier alternative to something like pudding that has a lot of added sugars. I’m also pretty sure it’s healthier than apple pie.

These come in packs of 6 and can probably be found at most Aldi locations in the US where people also eat apples. That’s just my guess. I’ve always kind of wondered how applesauce gets made. It’d be interesting if it’s the same process as wine where someone stomps around on the apples in a vat.

I was never a major apple person growing up. As a result of that, this is about my 5th time in life having the majestic sauce of apples. This seems to be the case with every brand (not just Lunch Buddies Cinnamon Applesauce) but I don’t think I’ve ever seen granny smith style. I only remember red.

Scratch that, Motts definitely has grandmother smith’s apples. I wonder if you’d get apple pie by just dumping a bunch of it into a pie crust and throwing that in the oven. There’s only one way to find out.

Just not today. Other side note, cinnamon and apples really go together. Even microwaving a regular apple and putting cinnamon on it is pretty darn good. Let’s hop into the ol’ nutrition facts for these.

These come out to an even hundred calories and not much else. I never realized they were pure carbs until right now. Must be a pretty natural product! Although it says there’s a lot of sugar, there’s only 5 grams of added sugar. Lunch buddies cinnamon applesauce has 19 grams of the good stuff.

Yea, I guess you could say these are pretty healthy. My thoughts were confirmed, it’s just good old fashioned apples, sugar, water, cinnamon and ascorbic acid.

My first impression when biting into a spoonful of this was pretty simple. It tasted like someone took an apple, created sauce out of it, and then made the sauce a little more dense. It’s like horseradish sauce, but with apples. It’s also a paper sleeve and a paper cup, so it’s good for the environment.

But seriously, it’s all natural. Ascorbic acid is just the technical term for vitamin C. This thing was really good and I plan to pick it up again in the future if I’m ever feeling the sauce version of apples. Now we just need to wait and see if they come out with the granny smith version!