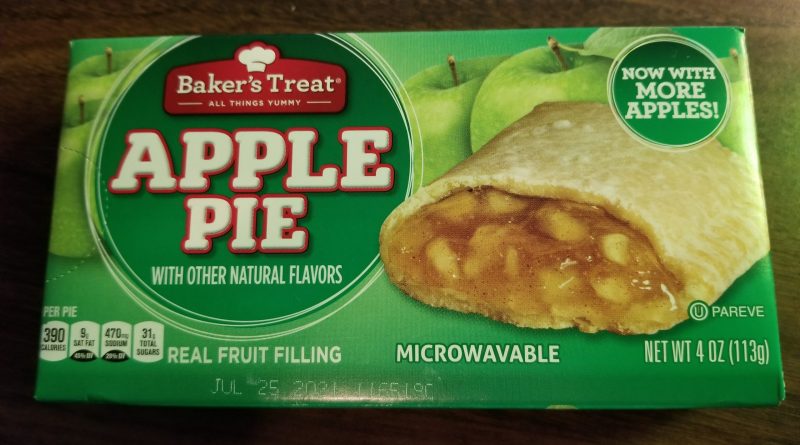 Baker’s Treat Apple Pie is on the table for me tonight. I’m not sure what to expect, either. I’ve definitely had boxed apple pies like this one and frankly, the ones in the past have kind of let me down. None were from Aldi, however, so I have high-hopes about today. Plus, it’s the 4th of July week right now so this review fits pretty well.

The first thing on the packaging that got my attention was that it says these contain real fruit filling. That could be the game-changer here. Whether that means all of the filling is real fruit or just some of it is remains to be seen. This one that I grabbed also happens to be made with granny smith apples. In fact, it’s even branded as having even MORE apples! This should be one exciting Baker’s Treat Apple Pie.

From a physical point of view, I really do like the outer packaging. It’s big enough where you know that the snack will be substantial, yet small enough to fit into your pocket. Not bad at all…di. See what I did there.

As far as the nutrition facts are concerned, it’s an apple pie. That means that yes, it’s high in calories. It’s also high in the stuff that’s considered not great for ya as all dessert items pretty much are.

Yea, you’ll be looking at 390 big ones in this Baker’s Treat Apple Pie. Then there’s about half of your daily saturated fat content, a lot of sodium, and a good bit of added sugars (58% of your daily value). Look, to take your mind off that, try saying Baker’s Treat Apple Pie 5 times fast. By the time you’re done, it’ll sound like you’re saying “Baker Street” (queue the Gerry Rafferty).

So, yea, it has all the -ates and -erides that you might guess. It’s a shelf-stable apple pie after all. You need to assume it’ll have some agar and xanthan gum in there. In the defense of these ingredients, this only lasts for a few weeks, so it’s many notches above Twinkies or pop-tarts on the is-it-real scale.

Despite the packaging inviting me to just throw it into the microwave box-and-all, I opted to put it into a bowl. I also sort of set it on top of the bowl and prayed it wouldn’t tip off into the microwave. My Baker’s Treat Apple Pie kind of collapsed in half into the bowl during cooking, but that wasn’t a big deal.

It felt like it was high-quality right away – the crust wasn’t too hard or too soft, it was just right. The taste was actually indistinguishable from a regular slice of apple pie from a bakery. Very impressed with that. The only bummer is really how much sugar is in these. My teeth are still pretty mad at me for eating it, but you gotta enjoy some sweet stuff once in a while, right? I say green light on picking one of these up next time you’re at Aldi.