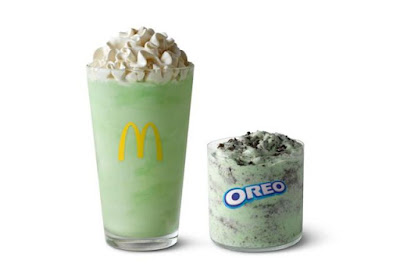 They’re comin’ back! The green and sugary goodness of the Shamrock Shake will be gracing the golden arches of McDonald’s locations on February 21st.

In addition to that is the Oreo Shamrock McFlurry, which debuted during the 2020 Shamrock Shake SZN. That’s something we absolutely need to try for Midnight Snack.

The Shamrock Shake is typically available for 4-6 weeks, according to guilty eats. Check out this old commercial for Shamrock Shakes from back in the day. I imagine this is late 80’s/early 90s:

You can find one of these delicious shakes at participating McDonald’s restaurants and may be able to use this website to locate a shake once they’re being sold. I tried using it, though, and it didn’t seem to work very well. That may just be because none are being sold yet, who knows.

OREO is a trademark of Mondelēz International group, used under license.