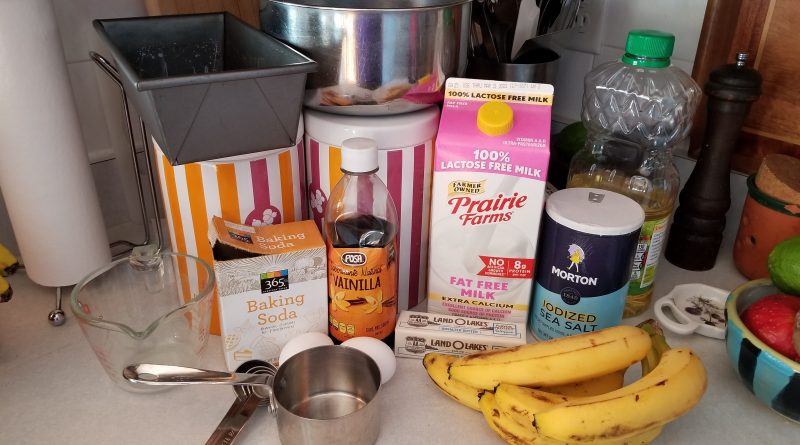 Banana bread recipes are always fun to make. You get to smash up some bananas, mix a bunch of ingredients together that smell good, and grease a pan. If your mom’s not looking, you can also lick the spoon and run the risk of getting some salmonella. The batter has raw eggs in it, so lick the spoon and whisk at your own risk.

That’s right, I used a whisk at first. As you’ll see in the pictures below, that wasn’t my brightest moment. It didn’t completely not work, but I definitely needed to switch to a wooden spoon.

Click here to jump to the notecard version of the recipe

What You’ll Need for This Banana Bread Recipe

The first thing you need to do is preheat your oven to 350 degrees F and then throw your 1 cup of sugar into the large bowl.

Next, grab your two eggs. Crack both of those into the sugar that’s already in the bowl for the banana bread recipe.

Next, dump your 1/4 teaspoon of salt in there for the banana bread recipe.

Next, dump your 1/2 teaspoon of baking powder in there. This is pretty important for that baking part.

After that, it’s time for your 1/3 cup of milk in this banana bread recipe. I used whatever we had in the fridge, but you’re probably safe with 2% or buttermilk.

Next, you’ll be dumping 1 tsp vanilla extract in there.

After that, get ready to dump in the flour for this banana bread recipe.

There’s two cups of that.

Some recipes might say to mix the banana in there sooner, but frankly, it’s fine for this banana bread recipe if you mix all the ingredients together except the bananas first.

You’ll need to soften the butter before adding that into the mix. I microwaved mine for 35 seconds and the entire stick pretty much melted. You’ll probably be fine doing 10 seconds or do the 35 like I did and have liquid butter.

Pour your butter or put a softened butter stick into the rest of the ingredients like in the picture. Next, grab a whisk or a mixing spoon to start mixing all the ingredients together.

If you use a whisk, get ready to be digging ingredients out of that thing.

Look at that chunked up mix. I mean, to be honest, it looks really good. I almost ate some right there.

Spoon’s here to fix this banana bread recipe. Maybe fix isn’t the right word. Either way, this’ll be appropriately mixed. Next, grab your bananas to mush them into this thing.

Using three of them for this banana bread recipe should be enough. If you’re using a wooden spoon and the bananas are soft enough, you can just throw them in there.

Smash up those bananas with the spoon. Mix everything around really well.

The mixture should look like the picture above once it’s done.

Grease your pan with a little Crisco or other spray. For this banana bread recipe, you can use a paper towel to move a little bit around and cover the entire thing.

Start to load your mixture into the loaf pan.

Make sure it gets smoothed out and evenly distributed

Bake for 60 minutes. Once it’s done or looks done, stick a toothpick into the center of the bread.

Once it’s ready to slice and eat, you should have something that looks like this: