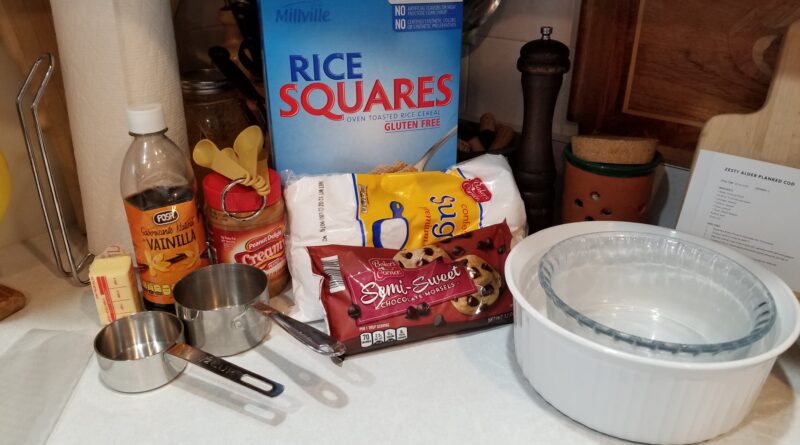 Puppy Chow Recipes are great any time of the year. You can eat it as a snack, dessert, or even for breakfast if you really have a sweet tooth. You probably don’t want to do it every day, like maybe once in a while is fine but I’m pretty sure your teeth will fall out if you did it a lot. Either way, here’s a link to the fast version of the recipe and a list of what you’ll need to make it.

What You’ll Need to Make It

Step One of The Puppy Chow Recipe

Grab one of your large bowls. This one that you’ll be putting the cereal in needs to be pretty big.

Next, get your cereal. You could probably use other types of square cereal for these like Wheat Chex, Chocolate Chex, or Corn Chex.

Get your 1 cup measuring cup next for this puppy chow recipe.

Measure out 9 cups of the Millville Rice Squares.

Pour all of them into the big bowl like below.

Set the bowl aside once you’re done with that. My toaster was the perfect place to set it.

Then, get your 1 cup measuring cup again for this puppy chow recipe.

Measure out 1 cup of those.

Following that, get 1/4 cup of unsalted butter. I had just the right amount in my fridge from the last thing I made.

Dump that in with the chocolate.

After those are together in the bowl for this puppy chow recipe, grab the peanut butter.

You can pick any kind you want, but I figured that creamy was the best way to go. I’ve never heard of a puppy chow recipe that has chunky peanut butter in it, just sayin’. Get a butter knife, too.

Get the peanut butter open and start scraping some out for this puppy chow recipe.

Fill up the measuring cup all the way.

Once you have a 1/2 cup of peanut butter measured for the puppy chow recipe, scrape it out into the bowl with the chocolate chips and butter.

Make sure it’s all in there really well.

Following that, microwave the ingredients on high for 1:15.

Once that’s out, grab a spoon.

Mix those three melted ingredients for the puppy chow recipe around really well.

It might take a minute or two to get everything blended well.

It’ll look like the picture below once it’s mixed well enough.

Once it’s mixed up, through the mixture for this puppy chow recipe back in the microwave for 20 seconds.

Following that, grab the vanilla.

Measure out 1 teaspoon of vanilla and dump it into the chocolate mixture.

Stir all of that around really well.

Once that’s done, grab your bowl of Millville cereal that you set aside earlier.

You’ll also need to line a baking sheet with parchment paper for this puppy chow recipe. It was force of habit, but I also added aluminum foil. Probably didn’t need that but whateva.

Dump the cereal out on to the parchment paper.

Once that’s all there and spread out, grab the chocolate mixture. This puppy chow recipe is really about to come together!

Spoon as much of that out into the cereal mix as you can.

You may need a spatula to get all of it.

Scrape the remaining chocolate out of there and start spreading it around in the cereal.

If you’re like me and having trouble mixing everything, don’t hesitate to dive in there with your (clean) hands and sort of knead the chocolate and cereal together. Putting on some plastic gloves wouldn’t be a bad idea either.

Once that chocolate is thoroughly mixed around, grab your powdered sugar.

You’ll also need the 1 cup and 1/2 cup measuring cups. If you don’t feel like cleaning the peanut butter out of the 1/2 cup, do what I did and just eyeball the half-cup measurement using the full one.

Measure out 1 cup first for this puppy chow recipe.

Spread that as evenly as you can over the cereal/chocolate mixture.

Again, you may want to mix things around with the spatula a bit. You don’t want the powdered sugar clumping up on the top of the rest of it.

The spoon or your hands work pretty well, too for mixing things around.

Once that’s mixed, it should look something like the picture below.

Next, grab a large sealable container for this this puppy chow recipe.

Start loading the mixture from the baking sheet into the container.

Close it up and get ready to shake things around. This is the last step of mixing it up.

Once the container is firmly sealed, start mixing it around. Mix it really well.

Once that’s done, you’ll be all set to enjoy some of this puppy chow recipe. It might be better after a little time in the fridge, but you’ll probably want to dig in and sample a little bit.

These are really good for a snack, dessert or whatever. Bring some to the office if your remote work is ending, why not?

Here’s the short version of the recipe: