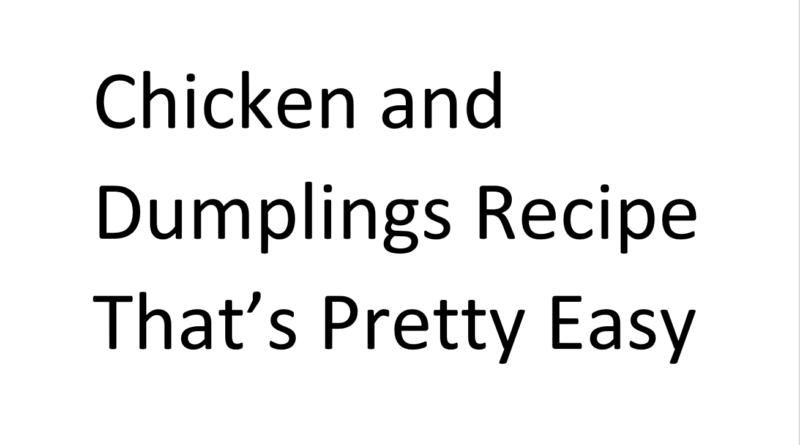 Chicken and Dumplings Recipe is what I’ll be focused on here. I’ll be going over what you need to make it, including ingredients and cookware. Then, we’ll cover the recipe itself.

Let’s start off with what you need first. You can pick up a lot of these things at your local Aldi or Publix store for pretty cheap.

Step 1 of this Chicken and Dumplings Recipe

Fill up the big pot of water and put it on medium-high heat to boil. This is for making the dumplings.

Step 2: The Onions and Chicken

Grab your cutting board and the kitchen knife to chop up some onion(s). Get the onion or onions (1 large is fine) and chop it up, removing the inedible parts. Chopping it up finely is good for this chicken and dumplings recipe.

Put the onions aside in a bowl. Grab your whole chicken and rinse it with cold water. Dry it with a paper towel and then chop it up on the cutting board.

Remove the small bones but leave in any big ones that you want. They’ll separate easily once the chicken is cooked and are better for the flavor.

Put your pan on the stove with 1-2 tablespoons of bacon grease in it. Oil also works. Put the onions in the pan with the grease or oil and brown them for this chicken and dumplings recipe. Once the onions are softened and well colored, add the chicken.

Brown the chicken quickly and add paprika to taste. Lower the heat and add enough water to cover the bottom of the pan. Continue to cook on low heat. Put the lid on the pan but leave it slightly open to avoid boiling.

Step 3 for Chicken and Dumplings Recipe

While the chicken is cooking in the pan, make the dumplings. Mix together your two or three cups of flour, 2-3 eggs, a pinch of salt and water as needed in a bowl until it’s at a sticky consistency.

Use the dessert spoon, melon baller or ice cream scoop to drop the dough into the boiling water. Heat whatever you use up in the water to help prevent dough from sticking to it. When the dumplings for this chicken and dumplings recipe float, they will be done. Once done, put them in a bowl and keep them warm.

Make sure that your chicken is cooked to 160 °F and the dumplings are done/drained. Add the dumplings to the pan and add the sour cream to coat. Add some more paprika until it’s more pink than white.

Once this chicken and dumplings recipe is made, eat with your favorite bread as a side.

Original recipe from Wikibooks, modified and used under the Creative Commons Attribution-ShareAlike License.