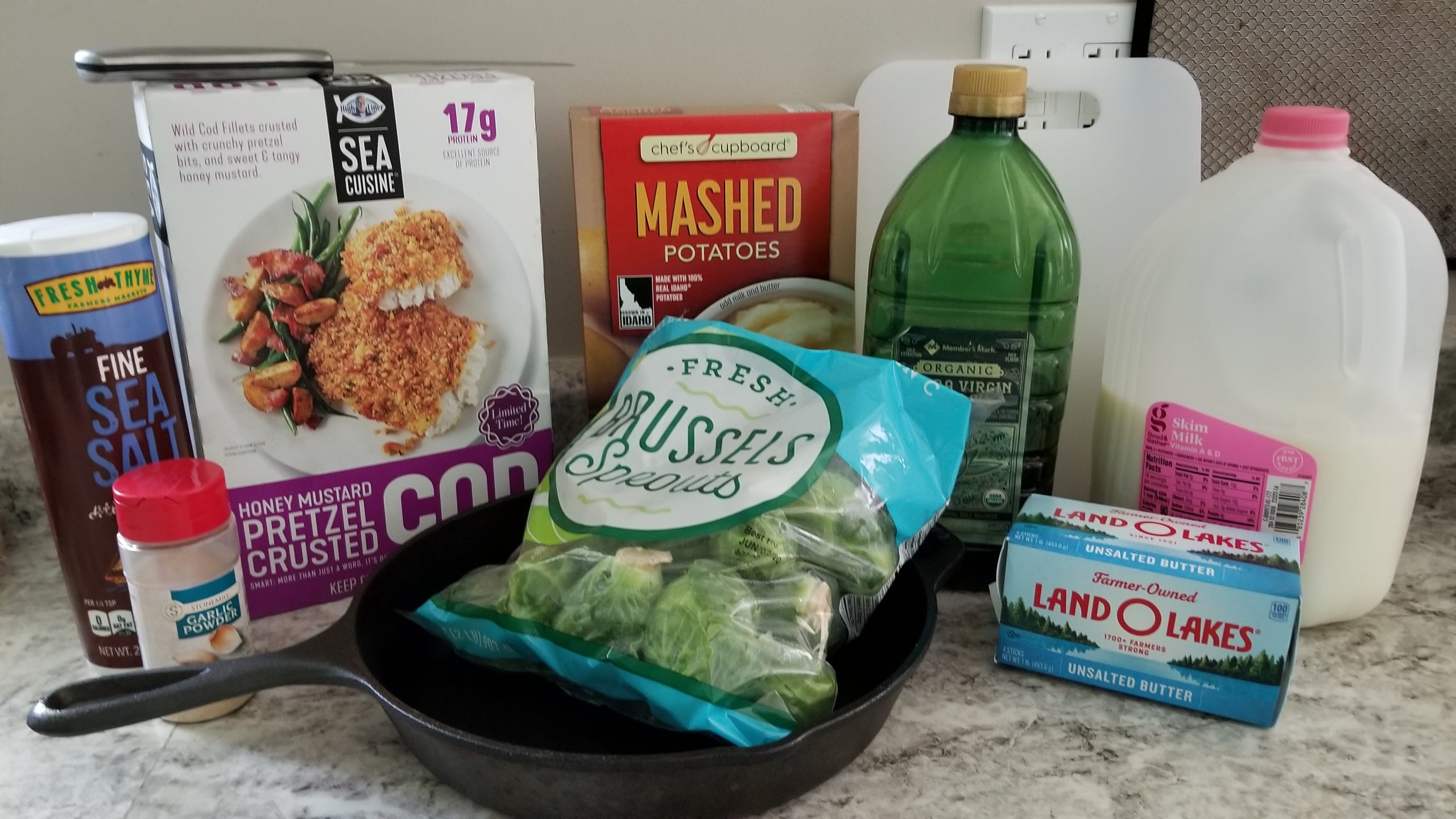 Cod with Brussels Sprouts is our meal tonight. A great low-cost fish to eat for getting some of those oh-so-healthy Omega-3’s. Combine that with pretzels and you’ve got a winner winner…. fish dinner.

The original plan was to just buy fish-only and do this recipe, but, when I saw the frozen pretzel crusted cod at Sam’s Club and the price difference, it was kind of a no-brainer to use that instead.

This recipe’s been tested for quality and it feeds 2 for a great dinner. Plus, it doesn’t take more than about half an hour to make it. If you need to make dinner in a pinch and have these ingredients on-hand, it’s an awesome weekday option. You can substitute the cod in this with most other kinds of fish or even other frozen types of cod.

The great thing about this recipe is how well it fits for a meal pretty much year round.

Start by getting the bag of Brussels sprouts out.

Then, get your kitchen scale and a small to medium sized bowl to put them in. Set the bowl on the scale.

Add Brussels sprouts to the bowl on your scale until it reads half a pound or about 225 grams.

Grab your cutting board and a kitchen knife.

Start cutting the Brussels sprouts, one at a time on the cutting board. Cut off the stem first, then, cut down the center of it.

Take your cut up Brussels sprouts (any stray leaves, too) and dump them into the big bowl.

Find a mixing spoon and the 1 tsp measuring spoon.

Grab the salt for your cod with brussels sprouts.

Measure out 1 teaspoon of salt and dump it into the bowl of Brussels sprouts.

Mix that around a little bit with the big spoon.

Get your garlic powder and toss a few sprinkles of that into the Brussels sprouts.

Mix the garlic powder around a few times so it gets distributed well with the salt.

Set the bowl of Brussels sprouts aside.

Find a medium sauce pan for cooking the potatoes.

Get your milk and two glass measuring cups out.

Scoop 1 cup of potato flakes out of the potato mix, smooth off any excess mix with a kitchen knife.

Find your stick of unsalted butter.

Cut 1 tablespoon of the butter off of the stick.

Set the mashed potato ingredients aside for the time being.

Take out a medium to large sized baking sheet and parchment baking paper.

Pull the pretzel encrusted cod out of the freezer (if you bought Sam’s Club cod).

Rip off a sheet of parchment paper and cover the baking sheet with it.

Set two filets of the cod on the paper, then, put the baking sheet in the oven for 18 minutes.

Get your cast-iron skillet and the measuring spoons.

Turn one of your stove burners to medium-high heat and set the skillet down to start heating up.

Find the olive oil and measure out 1.5 tablespoons of that into the cast-iron skillet.

Make sure that the olive oil gets moved around really well in the skillet and covers the entire cooking area.

Let that heat up for five minutes or so until it starts to steam.

Once the pan’s hot, grab your bowl of Brussels sprouts and dump them in, scraping any leftover seasoning into the skillet with the mixing spoon.

Keep the same spoon around for the cod with brussels sprouts.

Using the spoon, move the Brussels sprouts around periodically in the skillet while they cook at medium to high heat. You may decide to lower the heat a bit, that’s fine, too. These will take about 10 minutes to cook. Any more than that and they’ll probably be burnt-sels sprouts. Alright I’m done.

While those are cooking, pour the milk, water and throw the tablespoon of butter into the saucepan. Turn the heat to high for that one.

Once the mixture in the saucepan is boiling, remove it from the heat and dump the cup of potato flakes in. Start to mix it around a little bit while balancing the mixing of the Brussels sprouts.

Alternatively, you can just wait a few more minutes for the Brussels sprouts to be done cooking. Or, just grab a second spoon so they aren’t too tainted with potato.

The fish will be done soon, our cod with brussels sprouts and mashed potato is coming together!

About the time that your stove-top parts of the meal are done cooking, the fish will also be coming up at the 18 minutes.

When the timer sounds, push your saucepan and cast iron-skillet to the back of the stove and find an oven mitt.

Have a meat thermometer ready for this next part.

Put on the oven mitt and take the fish out of the oven with it. Stick each of the fish with the thermometer and ensure that each filet is at least 145 degrees F.

Let the fish cool off for at least 2 minutes if they’re done.

Load up your plates and serve! This meal makes 2 servings, although I put away both by myself after I made it.