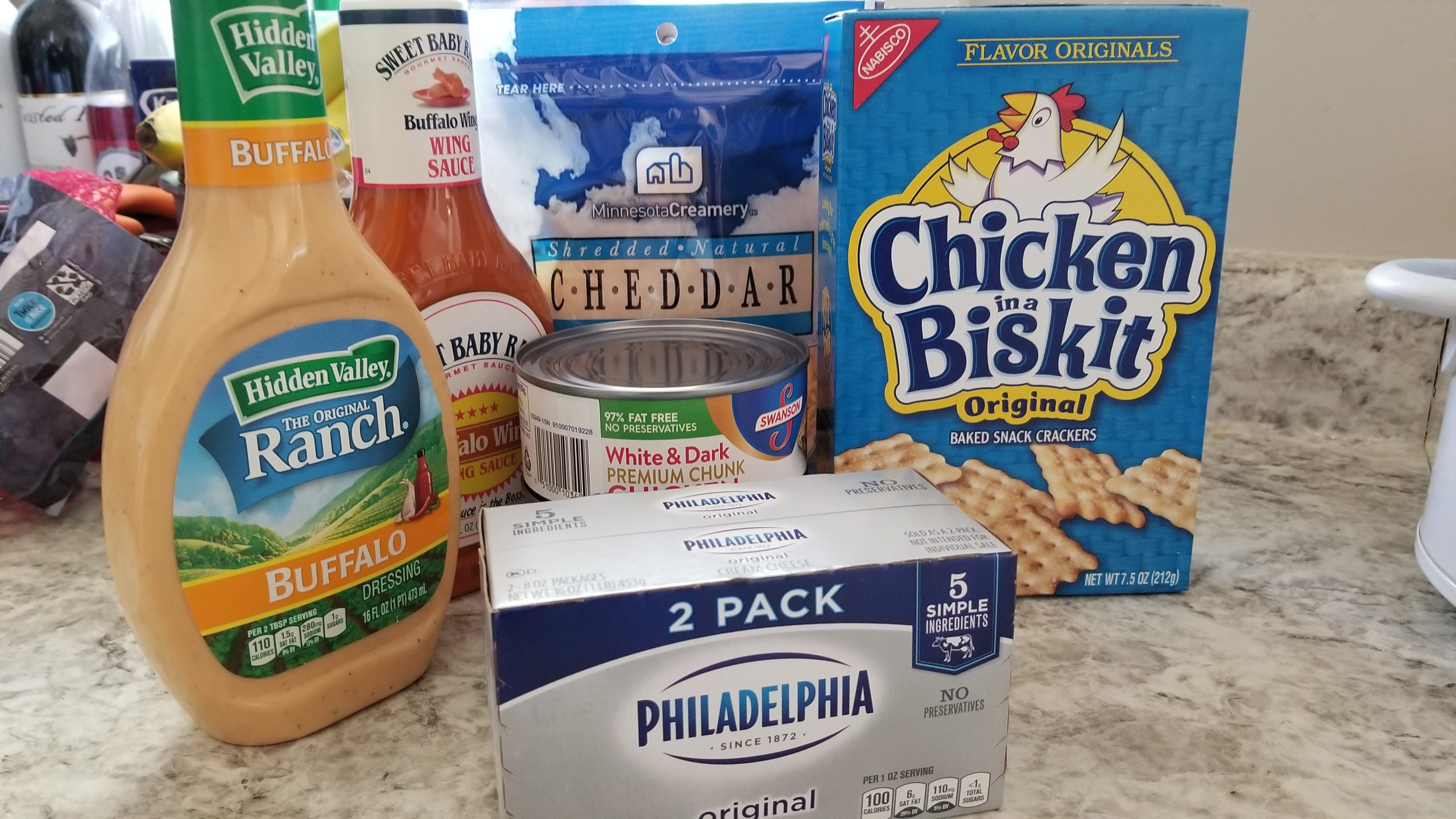 Buffalo chicken cheese dip is both easy to make and delicious. The first time I ever had this, I thought that it must have taken my friend’s mom at least a few hours to make. After looking through a few different recipes across the internet and making it myself, I realized that this is actually pretty quick to throw together. On top of that, there are a few steps that can be skipped and they won’t affect the taste or quality (speaking from experience). I decided to put together the quick and cheesy version of this that I did myself so you can, too.

Making this buffalo chicken cheese dip isn’t exactly budget-conscious, since it does run about $21 before crackers for dipping (in case you already had some at home, someone has an old bag of Chipotle chips, etc).

That being said, this recipe does make enough to feed the whole group of people you’re with. At least it should, because most human beings can only handle so much cheese. There’s no affiliate links in this article.

Here’s a handy list of everything you’ll need to make this (with a step-by-step recipe to follow):

Start out by testing your slow cooker (ours is a Crock Pot) to make sure it’s working for the buffalo chicken cheese dip.

Make sure to dry off the cooker part before putting it back into the heating base. Turn on the cooker when you start so it gets warm for a little later when it’s time to dump the first ingredients into it.

Grab all the ingredients and make sure you can find everything.

The first step will be opening the two cans of chicken.

Grab your can opener and get ready to shred some metal.

The bowl we used to mix the chicken and hot sauce was a little too small, it’s really an over-sized cereal bowl but it gets the job done as you’ll see.

If your can opener is like ours, get ready to fight with your can because this took a lot longer than it should have for us to open.

One thing that you can do for easier draining is just impale the can once and use that little cut to pour out most of the water in there.

Once you have can #1 drained, plop the chicken in the mixing bowl (in our case, the large cereal bowl). The buffalo chicken cheese dip begins.

After the first can’s chicken is in the bowl, move on to the 2nd.

Repeat the opening/draining process for this second can.

Pour it into the bowl with the rest of the chicken.

Now it’s time for your Sweet Baby Ray’s. This can be done with a lot of different hot sauces, but this one looked good on the shelf at the store.

Grab your measuring cup for the buffalo chicken cheese dip

Pour in about 1 cup of the hot sauce.

Time for the meeting of the century: chicken and hot sauce.

Pour that hot sauce in the bowl with your chicken, let’s hope they get along.

If it looks like you’ll need a spatula for hot sauce that gets stuck in the measuring cup, you’re right.

Grab that spatula, you’ll probably need it. Unless yours magically all gets poured out.

Scrape as much as you can out and into your mixing bowl.

Now it’s time to mix the chicken and hot sauce around a bit before having it possibly explode in the microwave (because our bowl is small).

Pick it up and bring it over to the microwave. This step isn’t totally necessary, but it does speed up the cooking process if this goes into the slow cooker warm already.

As you can see, we frequently clean out microwave. Put it in for 1 minute on medium to high power.

You can probably get away with 45 seconds. Frankly, I was nervous this would actually blow up so I kept a close eye on things.

When it’s done, check to make sure you don’t need to clean anything up in the microwave. If it all stays in the bowl (which it should if you use a bigger one!) then it’s time to pour it in the slow cooker.

An oven mitt may be needed if your bowl is 200 degrees like this one was.

Try not to spill too much.

Going slowly at first is probably the best way to go because otherwise the hot sauce may splash on you.

The cooker should already be hot at this point and will continue to keep the microwave-heated mixture warm.

You’ll be pouring about a half cup of this for the mixture. Some recipes call for a little more, but this turned out pretty well.

We barely went over the 1/2 cup mark for the buffalo chicken cheese dip.

Pour it into the cooker with the other ingredients.

Make sure you keep the spatula nearby after the first time you scrape the measuring cup – some might be tempted to throw it in the sink. You’ll need it.

You should start to notice a lava-like substance forming. Maybe if you’re lucky it’ll tell your fortune, too.

Grab the spatula again and mix that concoction together a few times. It’s almost like we could stop here, but it only gets cheesier.

Grab the 2 pack of cream cheese, things are about to get crazy.

This might seem like a lot, but it’s the right amount to throw everything there in. This was approved by five separate taste testers.

Try not to let any stay behind in the wrapper, I had to scrape a little bit out of each one.

Toss it in the cooker, don’t worry if it looks like things are too chunky right away.

Grab and open the second cream cheese block, they can both go in at the same time. Alternatively, you could do one at a time to make sure everything melts and space out putting them into the cooker by 10 minutes. We did both at once and it worked fine, although at the bottom of the cooker (once we ate most of it) I did notice there was a small amount of un-melted cream cheese.

Throw the second block of cream cheese in and mix it around with the first. Again, don’t worry that things are really chunky at this point.

You won’t need any measuring cups for this if you buy a bag with 2 cups worth of cheese in it. If there’s more than that, grab a measuring cup (1 cup for the amount) and measuring out 2 cups of cheese.

Next, pour two cups worth of cheese into the slow cooker mixture.

You can try mixing it around a little bit while it’s in there, but, the whole thing will be pretty chunky at this point and it will need time to melt.

Put the lid on your slow cooker and pick up a book (or start streaming a 20 minute show, walk the dog, etc.) because this needs to melt together for the next 20 minutes.

Setting a timer on the stove or microwave will help.

Don’t worry about venting it if you see the lid getting foggy, the cheese won’t boil out or anything (at least it shouldn’t).

After 20 minutes is up, open up the cooker and grab the spatula again to mix everything around now that it’s melted more. The buffalo chicken cheese dip should be coming together now!

As you can see, there will still be some un-melted cheese on the top and likely some cream cheese chunks down below. You will be breaking most of that up right now by mixing it around.

My hand looks like a crazy alien tentacle here, sorry about that. You may find yourself making plunging motions with the spatula.

After mixing it for a few minutes, it should start to look like it’s almost ready. Because it is. Grab that lid again off the counter.

Ready the dipping crackers, chips or whatever you bought/had in the cabinet to accompany this. I went with some “Chicken in a Biskit” because they taste good and the name’s funny.

Put another five minutes on the oven to let the buffalo chicken cheese dip melt more.

After the time is up, the dip will be ready to sample. If we did this over again, I might have put 10 minutes on the home-stretch melting since there were still a few chunks here and there. Overall, though, it’s ready to put out for serving at this point as long as it stays in the cooker on low heat to keep gradually continuing to get more melty.

We tested it out with these little dipping bowls, you can probably find some just like them pr something similar on Amazon.

I left the lid on and the cooker set to “high” for about an hour while people started to shuffle through and eat it.

I arranged them in a hot tub-style layout so the crackers could get to know each other before they went swimming in someone’s gut.

This is great for all kinds of get-togethers, we just made this on a regular Saturday afternoon and it was still awesome.

It worked out pretty well, here are a few pictures of what the cheese looked like after being left in the cooker on low for about four hours:

It held up really well all day. Toward the sixth, seventh and eight hour of being on the counter, it did get some crust. It looked kind of like a cheesy exoskeleton being shed. I guess buffalo chicken cheese dip can molt.

If this doesn’t show the crust clearly enough, just wait for this next one.

It almost looked like bacon (the crust). This picture was about the ninth hour sitting on the counter. Can confirm: roommates continued to eat it while being fully aware it had been out there that long and also enjoyed it.

This was taken at about 10 p.m. that night. We saved what was left and scraped out the slow cooker as best as possible. You want to wash yours on the same day you make this, otherwise it will get pretty gross and crusting all night sitting on the counter.

There you have it, a tasty slow cooker Buffalo Chicken Cheese dip recipe that you can make and share with a lot of different people (because if you tried eating the whole thing yourself, you’ll probably have a heart attack). If you like this recipe, please share it with friends, family, and even your enemies. Nobody should be without delicious slow cooker cheese lava. Nobody.