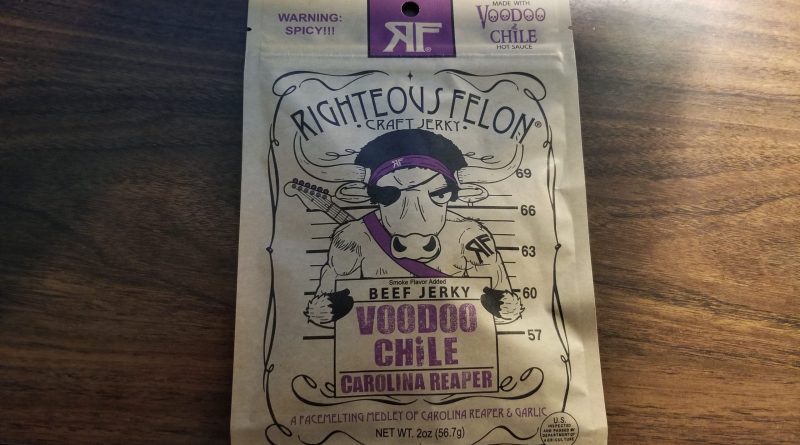 Righteous Felon Voodoo Chile Beef Jerky is our focus here. I’ll be tearing into a bag of this and try to figure out what the real story is here. I’m genuinely curious if a convicted felon or felons runs this company. I mean, it definitely sounds like a joke on their “About Us” page on their website.

At the same time, think about what happens when you’re a felon. You basically can’t get a job anywhere that pays a lot unless it’s high-risk and they’re desperate for employees. The logical thing to do if you’re fully rehabilitated (and educated) is to try and start your own company to make a ton of money. Go big or go home.

Anyways, that’s that. We’re now looking at this Righteous Felon Voodoo Chile Beef Jerky because someone, whether a convict or not, started the company and it’s time to try it out.

A Little on The Company

The bag has a bit of a story on it. It goes:

“In 1997, a band of three young, small-time crooks developed a recipe for a highly potent substance that went by the street name ‘Jerky.’ Within weeks, jerky flooded the streets of Chester County, PA. The gang was moving 10 kilos a week – pushing in the back alleys, the street corners, and the recess yards. Supply couldn’t keep up with demand, and the boys got sloppy. In the fall of ‘98, a deal went awry in the 9th-grade hallway bathroom when a teacher caught the boys mid-chew. The three received 4 hard hours of after-school detention…without parole. Whilst on the inside, they became cell-mates with a man that went by the name ‘G-off,’ a notorious carnivore known for only two things: a distribution network that stretched from Brazil to British Columbia, and an insatiable thirst for meat. It was this cell-mate-ship that altered the course of jerky trafficking, and American history, forever…”

Sounds interesting enough. I just want to get to the jerky.

This one is spicy. I’m not sure how spicy exactly because I haven’t eaten it yet, but there’s literally a warning on the front of the bag that says “Spicy!!!”. That many exclamation points tells me that they aren’t messin’ around here. It’s made with Voodoo Chili Hot Sauce, which we’ll get to in a few minutes. Let’s go over nutrition facts first.

Each package of these has about 2 oz’s in it. Of those, there’s 2, 1 oz servings. You get 60 calories in each serving. There’s not too much fat in this Righteous Felon Voodoo Chile Beef Jerky. Just 1 gram overall. You get 7% of your daily cholesterol and 15% of your daily amount of Sodium. I’m surprised that there’s even carbs in this jerky but most of those are from the sugar, likely added to balance off the spiciness.

There’s also 10 grams of protein per once. I like it.

There’s also chili powder, pepper, and natural smoke flavoring. On top of that, they have the usual things you would find in beef jerky. Beef, water, brown sugar, soybeans, salt molasses, etc.

As soon as I opened the bag of Righteous Felon Voodoo Chile, that aroma hit me square in the throat. Like, just the smell is so strong that it went into my nostrils and into my throat. It kind of hurt but that didn’t deter me. The first piece that I took out looked like something between a piece of bacon and a tongue. Not a human tongue, just a tongue.

First bite of it went over smoothly. It was hot, but not that hot. Usually when I do a beef jerky review like the Biltong from Aldi, I typically snarf down the entire bag of the stuff right there on the spot. In the name of consistency, that’s what I did here. Big mistake.

Even if the first bit of the decently sized piece went over smoothly, it was still hot. Then the heat got turned up. From eating a bunch of pieces of it at once, my mouth suddenly caught on fire. Not literally, but my mouth was pretty hot. One glass of emergency water and then chugging my liter water bottle upstairs pretty much cooled things down. It was still good, just pretty hot. I bet I only ate 1/3 of the bag, maybe not even. If you like spicy snacks, these are probably right up your alley.