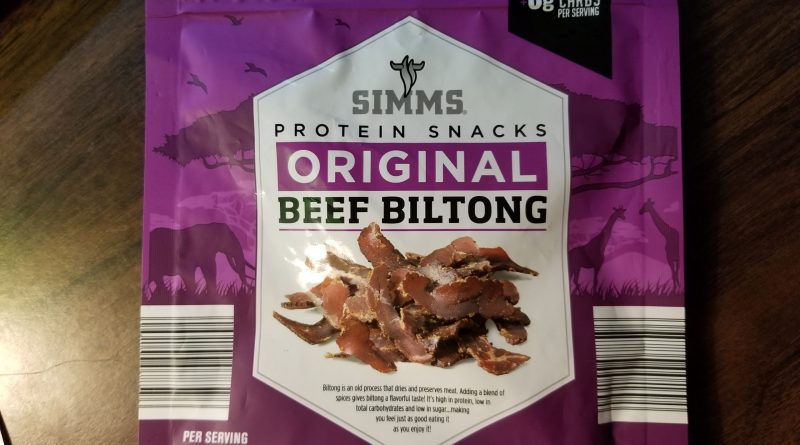 Simms Original Beef Biltong from Aldi is on our plate for this one. It might be better for me to say it’s in my pocket, since this is a packet of beef jerky, I think. Truth be told, I didn’t even realize this was called “Biltong” until I got it home, I was kind of assuming it was just beef jerky.

According to the front of the package, Biltong is “an old process that dries and preserves meat. Adding a blend of spices gives biltong a flavorful taste! It’s high in protein, low in total carbohydrates and low in sugar…making you feel just as good eating it as you enjoy it!

Anyhow, Simms/Aldi’s packaging also boasts some impressive facts. You’ll be getting 16 grams of protein per serving and 0 grams of carbs. There is a lot of sodium in this, which should be expected no matter what type of beef jerky you snack on. People allegedly eat too much sodium in their diets, but I personally don’t. In fact, this Simms Original Beef Biltong came in handy for me. Normally, I have to add salt to everything I eat or put a ¼ teaspoon into my water bottles throughout the day.

This checked off my sodium box since I ate the entire packet.

Let’s check out those nutrition facts as well.

There’s a good bit of cholesterol in there, too. Outside of that, there isn’t much else to speak of. You’ll get a lot of iron if you eat the entire bag at once, but still, the thing that really sits center stage here is the amount of protein.

In terms of ingredients, the Simms Original Beef Biltong keeps it simple. Beef, vinegar, and that’s it. How could such a meaty snack be so simple? Who knows, that’s half the fun!

My first thought was the same as whenever I bite into any beef jerky: It kind of vaguely tastes like bacon. But at the same time, it doesn’t. The Simms Original Beef Biltong was a little bit softer than regular jerky. As far as I’m concerned, that was a good thing. It actually isn’t bad at all.

Initially, I was thinking I’d take it easy and eat this over a few days. That plan didn’t work out so well and I downed the whole bag. If you plan on doing that paleo diet at some point, getting these at Aldi could be a good move. Even if you don’t, it’s not bad to keep handy in a backpack or in the car somewhere. One major advantage Simms Original Beef Biltong has over other snacks is that it won’t melt and there’s no refrigeration required.