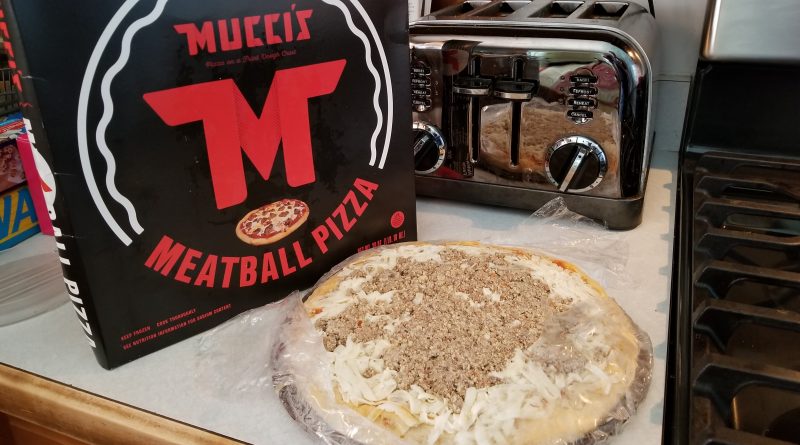 Mucci’s Pizza is on my plate today and man does it look cheesy. Like, this is pretty intense pizza. I know that the ultra-cheesy style has been becoming a big deal with ones like Heggies and Lotzza Motzza dominating the bar scene.

Specifically, I’m having the meatball style ‘za so there’s a bunch of meat on it, too. Personally, I like all kinds of pizza.

You can catch me enjoying anything from a square Totino’s to a Red’s Savoy (if we’re talking Minnesota pizzas). Sometimes, I’ll mix in something like a Jack’s or even a meatless DiGiorno if I’m feeling adventurous.

I didn’t even know Mucci’s pizza came frozen until I found one in the freezer at my parents’ house today. This type of pizza is like a happy medium between regular/thin crust and deep dish. They taste like there’s about half the cheese of a deep but about 1.5 or 2x the cheese of a thin.

Let’s cringe at the nutrition facts quick before trying it out.

Yep, Mucci’s pizza isn’t that good for you. Most pizzas aren’t. What did you expect? Didn’t you look at the picture with all the meat atop a mountain of cheese? Let’s be honest, there’s probably no healthy pizza out there that tastes good.

Alright, let’s just get through this. There’s 300 calories per serving. If you have a decent appetite, plan to eat about 900 calories total. That’s half the pizza, but your plate won’t be overflowing or anything. The pizza’s densely packed.

There’s 18% of your daily amount of fat in this Mucci’s pizza per serving, so, it’s really closer to 60% if you eat half. That also means 90% of your saturated fat for the day and 36% of your daily cholesterol.

The sodium gets pretty excessive. Drink a lot of water.

You’ll also get some great carbs and a healthy amount of protein in this Mucci’s pizza.

Those calcium and iron numbers are great, too.

Let’s take a look at some of the ingredients in Mucci’s pizza.

Something you won’t find in a ton of pizzas is deep fried pizza crust. I think this’ll be the first time I’ve had that, so, we’ll see how it goes. There’s a couple weird sounding ingredients here, but, for the most part it’s healthy.

This pizza kind of has everything. Flour, honey, kosher salt, pecorino romano cheese, red wine vinegar, and the list goes on. It’s everything but the door on the spice cabinet.

This took a little while in the oven. That wasn’t a huge deal, since Back to School was on AMC and that movie’s engaging enough where I wasn’t getting antsy. I let the pizza cook for about 23 minutes, it seemed a little too brown when it came out but that ended up being about perfect.

Sometimes, these types of pizza can seem molten hot on the edges/mid-piece but then the center is still cold. In this case, it was pretty evenly melted.

I cut it up and each piece of the Mucci’s Pizza was similar in length/wide to a Jacks/Tombstone with the density of a Connie’s. After giving it some time to cool, I dug in.

The pizza was a good. The cheese and meat were tasty and the crusty crispy. The only problem with pizza like this is that you can get tempted to eat the whole thing. Do that and I can almost guarantee you’ll be messed up the next day. Anyway, it was tasty.