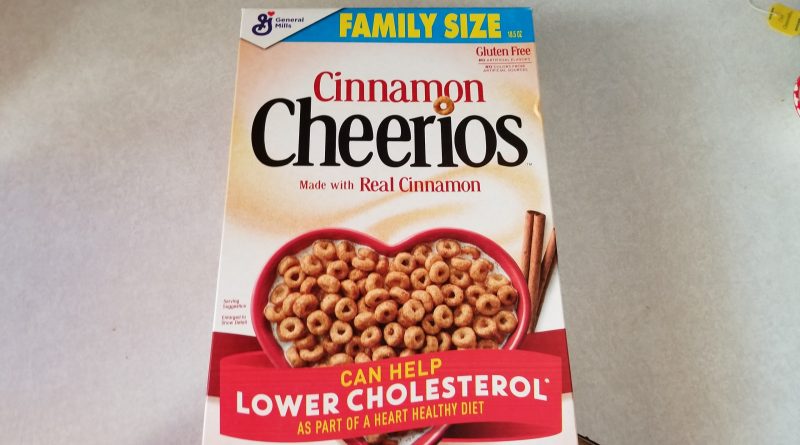 Cinnamon Cheerios are my focus here. I’ll be digging into the box, nutrition facts, ingredients, and give a taste-test verdict on these.

I’ve kind of been on a Cheerios spree for the last year or two. I bought this one in a 2-pack from Sam’s Club.

It was paired up with the pumpkin spice version of the cereal that I reviewed the week before last. That was pretty good, I might go and buy some more of that in October just because of the month.

I’ve also eaten my way through a bunch of other versions of Cheerios, like chocolate peanut butter or their very berry variety.

The one thing that I always get a kick out of is how they have the info about the heart-healthiness of the cereal. It definitely has a lot of good ingredients, but, there’s also a bunch of cereals that could make that claim.

Are these cinnamon Cheerios really any healthier for you than something like Honey Bunches of Oats or Grape Nuts? It’s tough to say. One thing that I do know is that things with cinnamon tend to be healthier.

Cinnamon is loaded with good things like antioxidants could potentially cut the risk of heart disease, according to Healthline. Anyhow, let’s dig into the nutrition facts.

In each serving (1 cup) of these Cinnamon Cheerios, you’ll be getting 140 calories. There’s not much fat to worry about, which is good news if that’s something you’re keeping an eye on.

No cholesterol and a tiny bit of sodium in there. You’ll get to the bulk of the calories if you look at the carbohydrates. There’s 10% of your daily fiber in there with a surprising amount of sugar.

Look at all of that. A whole 24% (probably 1% below 25 so no one can say they have a quarter of your daily sugar per serving). Realistically, my belief is that everyone is fine with a little added sugar every day.

Yes, there’s those who disagree, but a little sugar never killed anybody. It’s the folks eating tons and tons of it who have problems.

3 grams of protein. Getting down to the vitamins and minerals, there’s a healthy amount of them.

20% of your iron, Thiamin, Vitamin b, folate and zinc. Very good. There’s also a few other solid amounts in there, like calcium and vitamin D.

The ingredients for these cinnamon Cheerios include whole grain oats, sugar, canola oil, corn starch, and many others. The tripotassium phosphate sounds a little chemically, as does the caramel color.

Then there’s all the vitamins and minerals listed again. After that, good news – it’s gluten free. Personally, I can handle some gluten, but, too much and even I start to feel sick.

For some reason, I wasn’t expecting much here. There are a lot of cereals on the market today that have all kinds of varieties. The idea of Cinnamon Cheerios is fine, but it feels like one of those things that probably won’t sell with a ton of people.

Maybe I’m wrong, I don’t know. It just seems like the cinnamon market is controlled by Cinnamon Toast Crunch and the various knockoffs of that cereal. The taste test for this went fine. I actually really liked it and the cinnamon was well distributed.

There was just enough where I had to go back for more after every bite. I think that’s the main responsibility of a good food scientist/engineer, making a product where the person has to go back and isn’t ever completely satisfied.

This might just be a seasonal cereal since it was bundled with the pumpkin spice version. Either way, it’s good and worth picking up if you see it somewhere.