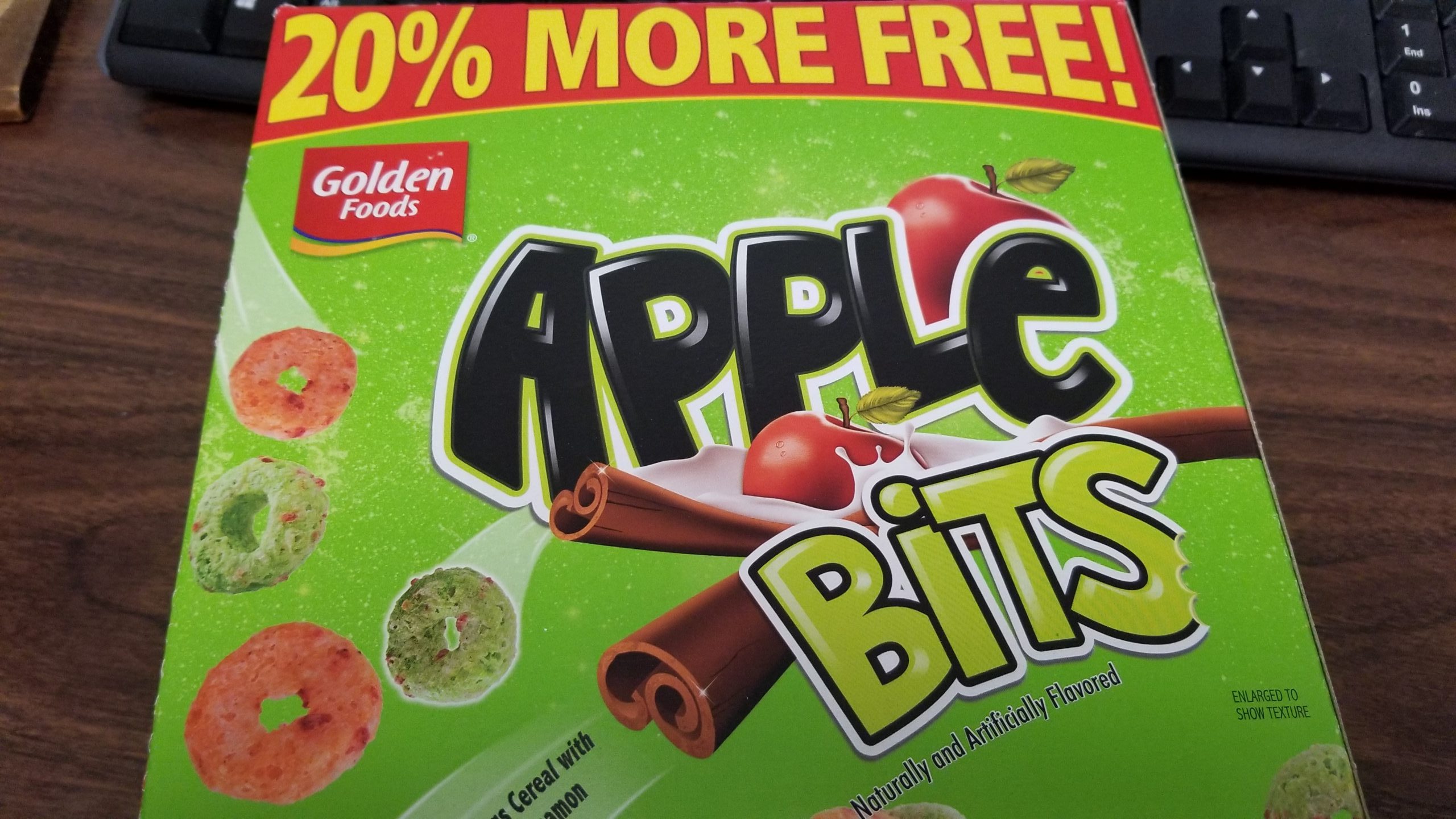 Apple Bits are an offering that you can find at the Dollar Tree from a company called Golden Foods. These are a very similar knockoff to the more commonly known Apple Jacks. At first glance, the box is practically identical to the more well-known apple and cinnamon cereal.

Since most sugar cereal is loaded with preservatives and other artificial ingredients, it seemed like this would be a great one to review. There’s a good chance it might end up tasting the same as its more expensive cousin at the regular grocery store.

Plus, it’s not the first time I’ve reviewed something from Golden Foods. Not too long ago, we took a look at their mini “Cocoa Balls” cereal on the YouTube channel. That one’s a Cocoa Puffs knock-off.

Each serving size of Apple Bits cereal is 1 cup. In one of those cups, you’ll be getting 160 calories. That’s pretty similar to most sugar breakfast cereal.

There’s not much fat to speak of in there. It’s got a decent chunk of carbs at 34 grams of your daily value. You’ll be looking at a quarter of your daily amount of sugar from these Apple Bits.

3 grams of protein won’t make much of a dent in your daily needs there. Getting down to our vitamins and minerals, this thing’s loaded with ’em.

Iron comes in at 15% of your daily value, followed by a solid 20% of your Vitamin A for the day. There’s also significant amounts of Thiamin, Riboflavin, and Niacin in there.

Vitamin B6 and B12 are also showing up strong in here with pantothenic acid and zinc making significant appearances as well. In case you’re coming up short with any of those vitamins and minerals, this cereal can be a great way to get them into your diet.

Ah, the ingredients. There’s a lot of hard-to-pronounce words in there. Taking it from the top, these Apple Bits have Corn flour, wheat flour, and oat flour. That’s three different kinds of flour!

There’s also a handful of different food dyes in there along with various preservatives. You can also get some genetic engineering out of this, as that’s mentioned at the bottom of the box.

The first time I tried Apple Bits cereal, it was being mixed into a concoction of granola, protein shake, and almond milk. Frankly, eating the cereal alongside all those other things was pretty disappointing. The shelf-life says it’s good for 1 year, but the first few pieces I ate tasted pretty stale.

The weird part was that when I ate some of the cereal by itself to formally review it, there was more crunchiness and it didn’t seem bad like the scoop I’d had the first time. Despite it being a little better on the second try, the cereal was still pretty lackluster.

There wasn’t a ton of apple flavor or really cinnamon that I could pick up. Plus, some of the green pieces were half dark and the dark pieces were a little bit green.

Recommend Apple Bits from the Dollar Tree? No