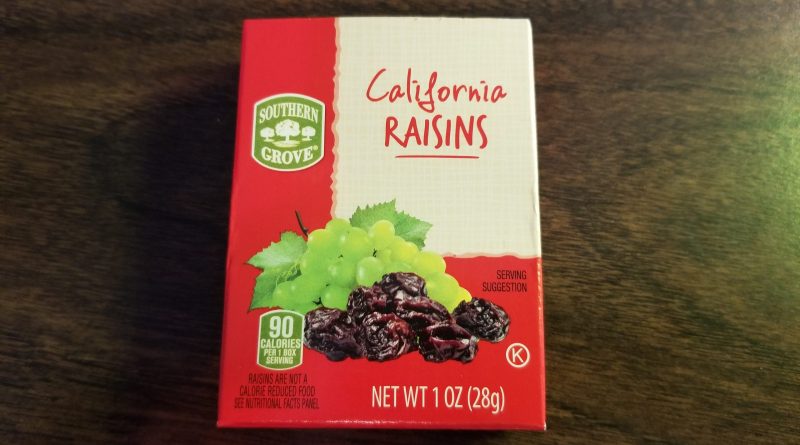 Southern Grove California Raisins come in 6 packs at the Aldi I like to shop at. Maybe yours has bigger boxes that can be purchased standalone or smaller ones in less-than-six quantities.

I feel like 6 is just the right amount. It’s like a 6 pack of beer, except way healthier for us! This isn’t the first time I’ve had raisins out of a tiny little box and it probably won’t be the last. These don’t cost much money at my Aldi, either. They run $.99 for the 6 of them wrapped up.

I always forget this, but raisins are just dried grapes. It’s crazy because the taste is significantly different. Dried blueberries kind of taste similar to regular blueberries. That makes me wonder why raisins are so different than grapes taste-wise.

The picture on the box of Southern Grove California Raisins shows a few grapes on their stem with a pile of raisins in front of it. I suppose if I didn’t have the almighty Google machine to ask where raisins came from, I could draw some conclusions from that. I think the big question is: could we turn raisins back into grapes?

It’s probably an unnecessarily complicated project, but, it might be interesting. We’ll find some time to do that another day, or maybe Aldi will start carrying reverse raisin-grapes at some point, who knows? For the time being, let’s focus on reviewing these Southern Grove California Raisins nutrition facts.

First thing we got is 90 calories in one of these guys. I should mention too that this is just an individual box we’ll be reviewing. I’m sure if you had the appetite, you could put away all 6 of these at once, but I like to space out my raisin eating over a few days.

No fat anywhere to be seen in these. Small bit of sodium but it’s pretty minimal. You’ve got mostly carbs at 8% of your daily value or 22 grams with no added sugars. Bonus points for no added sugars!

Then you’ll see that these Southern Grove California Raisins have a small amount of calcium, iron and potassium. Not too much though.

The big takeaway here is that if you need carbs, check these out.

Pretty straightforward here, you’re getting California raisins and no other ingredients. They do also want to give you a fair warning that “raisins are mechanically stemmed and may contain an occasional grape stem and/or wood piece.” As far as I could tell, there weren’t any 2×4’s in this box when I ate it, but I’ll examine my, um, ….movement later to be sure that these Southern Grove California Raisins were clear of any wood pieces.

When I was a kid, I was a little wary of raisins. Yes, they might taste good, but what kid wants to eat healthy fruit when they could eat candy or something? Then, as I got older, I started to realize that raisins were awesome and there’s even candy out there based around them. Really good candy. Ever heard of Raisinets? Learn it. Know it. Live it.

Anyway, when I saw Southern Grove California Raisins in Aldi, I figured that they were worth picking up. I mean, for less than a dollar, how could you pass that up? So far, I’ve been through 4 of the 6 boxes and each have been really tasty. No wood chips either (that I know of). True to what the box says, these are raisins, nothing more, nothing less. Each of these boxes can be a nice little snack. The only hiccup is that raisins are kind of sticky and you’ll need a wet wipe or have access to a sink nearby after eating them.

Check out the Aldi Ad for this week to see if they’re on-sale or if there’s anything else that’s good!