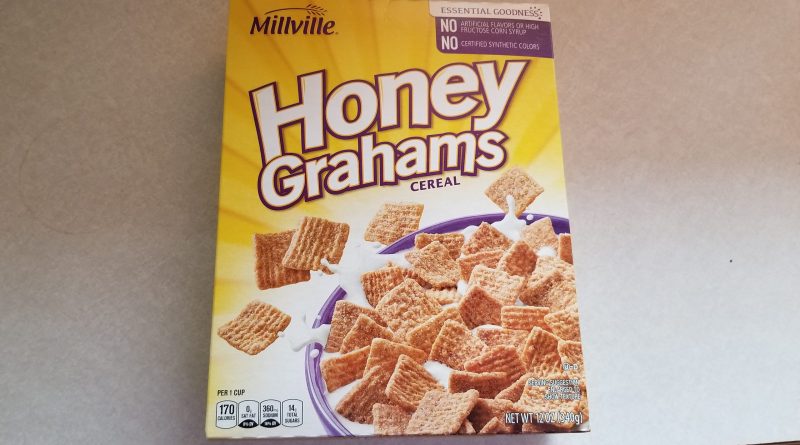 Millville Honey Grahams Cereal is on the table today for me. These are the Aldi version of Golden Grahams, a time-tested cereal that none of us got enough of when we were younger. Seriously, think about how good those were. Now think about how often you actually got them when you were younger.

It seems like they always get overshadowed by Cinnamon Toast Crunch, but frankly, I think the Grahams are better. Whether this Millville Honey Grahams cereal will live up to expectations remains to be seen.

Maybe my mom never brought home Golden Grahams because cereal made out of graham crackers seemed too unhealthy. I don’t know. Most nutrition facts across sugar cereals are all the same anyways, let’s be honest here.

What I like about this type of cereal is that it doesn’t need anything fancy like marshmallows or other things to entertain you. Yea, I know there’s a s’mores version out there containing marshmallows and chocolate or something, but we’re not talkin’ about that here. Plus, I’m pretty sure those are bars.

I’ve covered a few breakfast items at Aldi by now with many more to go. There’s barely a dent in the cereal aisle, let alone the cereal in that aisle with all the random stuff. Pretty sure that’s the aisle of shame, where they have a random assortment of marked down products. Let’s take a dive into the nutrition facts for this Millville Honey Grahams Cereal, shall we?

Each box of Millville Honey Grahams Cereal has 170 calories per 1 cup serving with 8 servings per container. There’s no saturated fat at all in there, so I’m pretty sure that means most of it is good. Wait, yea, polyunsaturated and monounsaturated are both good. Those are the kinds of fat you find in nuts and avocados.

It does have a little more sodium than I was thinking it would, but that’s not an astronomical amount. You’ll be getting 12% of your daily value of carbs in this, too. 28% of that is also your daily amount of added sugar you should be having (14 grams). Not much protein in this.

This Millville Honey Grahams Cereal is also loaded with various vitamins and minerals. 30% of your daily iron in 1 cup is pretty convenient. That calcium and the b-vitamins like B6/Niacin aren’t bad either.

This might be the most impressive part of the review. There’s hardly any chemically sounding things in this cereal, I’m really happy about that. You even get some rosemary extract. They could probably make some extra sales mentioning that this has an antioxidant in it on the front of the box.

I doubled down on this one. Like, I actually had a double serving for this review – 2 cups of it at once. That’s a pretty big gamble considering I didn’t know if it would be good or not.

Well, turned out it was pretty good. Tasted almost identical to Golden Grahams. All cereal, no funny business. Some good old fashioned breakfast cereal. I just wish there were more servings in the box. Since they aren’t that expensive, buying a second one wouldn’t be such a big deal. This Millville Honey Grahams Cereal tasted good with milk or even dry as a snack.