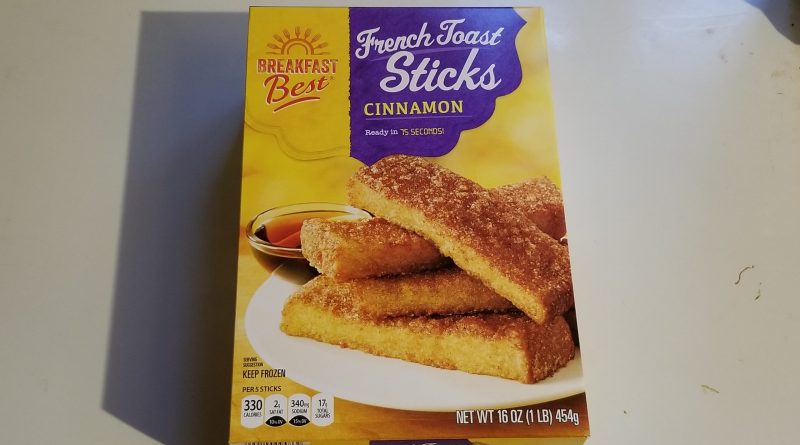 Cinnamon French Toast Sticks are on my menu today. I was aiming to review some more carb-dense foods from Aldi this week and these looked like a solid option.

Plus, I also wanted to work more into the freezer section from the snack and bar aisles. I’ve tried some of their bread before and that was pretty tasty.

This also isn’t my first breakfast item from Aldi, I recently tried their Benton’s Breakfast Biscuits, too. Those go great with some coffee.

These Breakfast Best Cinnamon French Toast Sticks look pretty good on the package. The picture is pretty honest except that they don’t come with syrup on the side. We’ll talk about the cooking process down below, but the syrup is already mixed into the sticks.

They really remind me of camp food growing up. I know that back then, the syrup was for sure on the side. Not a big deal here having it ready in the sticks since that actually makes them easier to prep. I’m sure Aldi did some research into that and decided it made more sense.

The serving size is pretty generous. Getting 5 sticks would fill me up pretty good if I have them with the other stuff I eat for breakfast. Those 330 calories alone will probably keep you full unless you need to eat a ton of food every day like I do.

Looks like these have a lot of healthy fat in them, I think. Pretty sure that if it’s not saturated or trans fat then it can only be healthy. Don’t quote me on that.

These Cinnamon French Toast Sticks have 15 grams of total fat in them. Only 2 of those grams are saturated fat. Little bit of cholesterol in there, too.

Slightly more sodium than I was expecting, but not an outrageous amount. I always assume most frozen foods will have kind of a lot in there.

There’s less carbs than I thought there’d be. The sugar amount makes sense with the syrup pre-injected into the sticks. I was kind of expecting more there, actually.

Little bit of protein and then a few vitamins/minerals here and there.

If you just skim the ingredient label for these Cinnamon French Toast Sticks, you’ll definitely get a “super chemically” vibe from it. That’s actually not true, though. Looking a little bit more closely (past the propionate and monoglycerides), these aren’t any different than most other bread-based foods. It’s basically enriched bread, water, and sugar. Also got some nutmeg and egg in there, as expected for French toast.

I stuck with the microwave option for these, no sense in messing with a toaster oven or regular oven.

At first, I was a little skeptical of the syrup being pre-loaded into the Cinnamon French Toast Sticks. After cooking my 5, however, I was completely on board. It made things a lot less messy and ultimately made the eating experience a lot more enjoyable.

I was able to cut these up and eat them with a spoon, too. Back in the old days at camps or wherever else I found myself eating French Toast sticks, sometimes they’d be so stale that it practically took a steak knife to cut through them. These were pretty soft and fluffy, so well done, Aldi. Well done.

In terms of taste, they are standard French toast sticks. I wouldn’t mind a little less sugar, but that’s probably unavoidable without sacrificing the amount of syrup in each one. I enjoyed them and plan to eat the other 3 servings left in the package. They might make it into my shopping cart down the road again once I’ve tried the other Breakfast Best items.